A senior prank is often an opportunity for high school students to make some mischief. That's why North High School Principal Sherman Padgett in Wichita, Kansas, wasn't so willing to take a bucket that a student offered him last Wednesday. 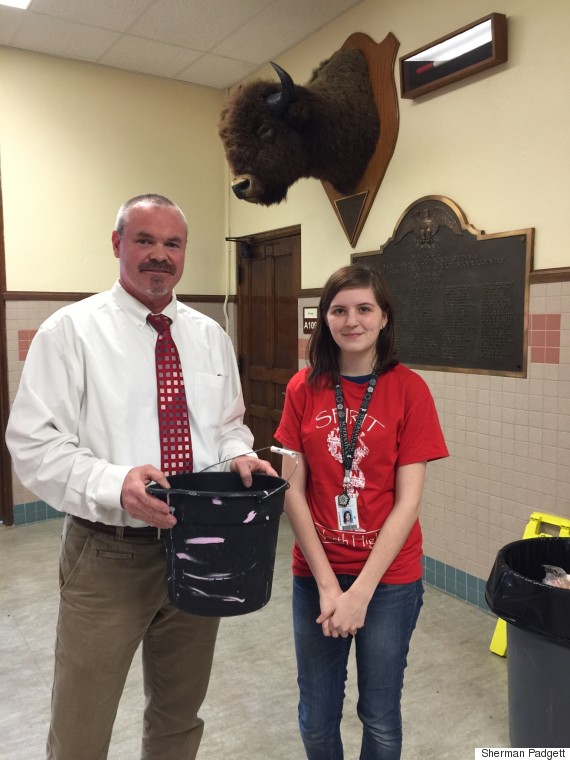 Sherman Padgett with Emily Jones, the student who organized the prank.

“No way,” Padgett told senior Emily Jones, according to the Wichita Eagle. “I’m not holding your bucket … You’re going to put fish eyes in it or something.”

Though he didn't accept the ominous item at first, he found the object on his desk later that day and walked out into the hall with it. Instead of the unpleasant surprise the principal had expected, students started dropping heartfelt notes into the bucket, expressing their thanks for the beloved educator. 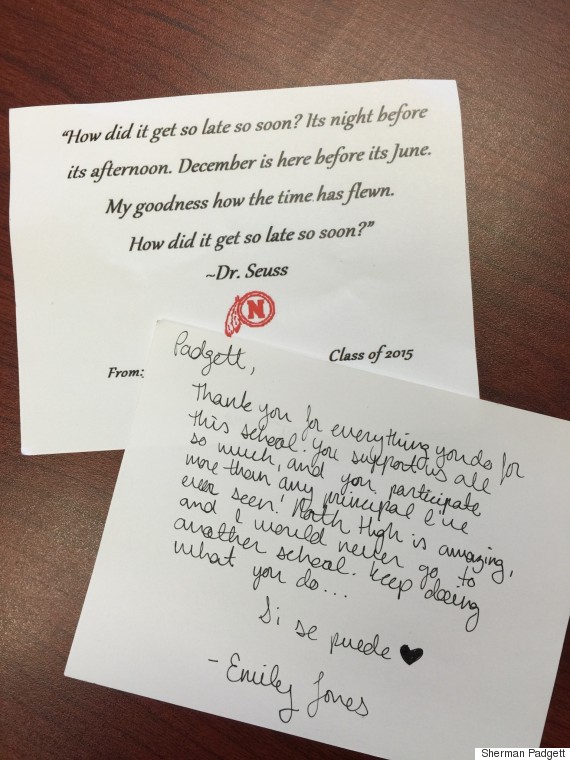 Notes that were put into the bucket.

"Became a little emotional on some of them," Padgett told KWCH after reading the notes, "I kind of read them and thought, 'Man, this is better than a paycheck. This is why I do the things that I do.'"

Jones, who organized the prank, was inspired to make the show of gratitude at her mother's suggestion, according to ABC News. She then worked with some friends and a guidance counselor to print and distribute enough cards for the entire senior class.

The idea sparked many students to share their favorite memories of the principal.

"You've made my first year experience in America one that I will always fondly remember," one note read, according to KWCH.

Another one said, “Thank you for the shirt you gave me, when I didn’t have clothes on my back, you provided,” the Wichita Eagle reported.

While Padgett says he's been overwhelmed by the beautiful gesture, Jones told the Wichita Eagle that her principal is just the type of guy who deserves the thanks.

“Mr. Padgett is a great principal -- the kind who dresses up like the Grinch for a pep assembly. So it wasn’t too hard.”

Julie Andrews
Getty Images
"Use your knowledge, and your heart, to stand up for those who can't stand, speak for those who can't speak, be a beacon of light for those whose lives have become dark."
Maya Angelou
AP
"People will forget what you said. People will forget what you did. But people will never forget how you made them feel."
George W. Bush
Getty Images
"To those of you who received honors, awards and distinctions, I say well done. And to the C students, I say you, too, can be president of the United States."
Advertisement
Judy Garland
MGM
"Always be a first-rate version of yourself, instead of a second-rate version of somebody else."
Horace, Roman poet
Wikimedia Commons
"Carpe diem." (Seize the day.)
Steve Jobs
DAPD
"Don't let the noise of others' opinions drown out your own inner voice."
Advertisement
Rachel Maddow
YouTube
"After we graduate tonight, we no longer have to let society happen to us. We get to create our own."
Olivia Newton-John
Getty Images
"I don't know what my path is yet. I'm just walking on it."
Barack Obama
Getty Images
"Because as tough as things have been, I am convinced you are tougher. I’ve seen your passion and I’ve seen your service ... I’ve seen a generation eager — impatient even — to step into the rushing waters of history and change its course."
Advertisement
Eleanor Roosevelt
Getty Images
"Life was meant to be lived, and curiosity must be kept alive. One must never, for whatever reason, turn his back on life."
J.K. Rowling
AFP
"We do not need magic to change the world, we carry all the power we need inside ourselves already: we have the power to imagine better."
Homer Simpson
Fox via Getty Images
"The three little sentences that will get you through life. Number one: cover for me. Number two: oh, good idea, boss! Number three: it was like that when I got here."
Advertisement
Mother Teresa
PA
"Don't look for big things, just do small things with great love. ...The smaller the thing, the greater must be our love."
Oscar Wilde
Wikimedia Commons
"We are all in the gutter, but some of us are looking at the stars."
Yoda
Lucasfilm
"Do or do not. There is no try."
Advertisement