William Eaton (his real name) isn't sure he and his dog will survive the winter in Chicago. Eaton, 66, lives in a 2- year-old RV in the driveway of a friend who is kind enough to let him stay there. For now.

"Everything I hold dear and precious is going to go away," says Eaton.

It's been a rocky ride for him since he was a young man, and talking to him, hearing his history, one can draw a reasonable conclusion that there is more to his current circumstances than just bad luck.

He flunked out of college, said he was a witness to a murder at the Chicago bar where he worked, had a breakdown, and didn't make it as an artist. The "turning point," he says, was being arrested in Chicago in 1993 for allegedly stalking Nelson Mandela (no charges were ever filed).

And like tens of millions of other Americans over 50, Eaton is in trouble financially. "I don't really have much of a future. It looks damn bleak."

Patricia, 50, waits patiently among dozens of others in the church basement on West 86th Street in Manhattan that serves as the West Side Campaign Against Hunger headquarters.

College educated and working full time, she says, since she was 14, she now claims to have disabling back pain that have left her with no income, $300 in the bank, and living in a room in Harlem with a family that, she says, is a year behind on its rent.

So like the other 33,000-plus people who come to this pantry style program for more than one million meals each year -- which allows people to choose from dozens of food choices as opposed to the more familiar soup kitchen format -- Patricia waits for her number to be called. 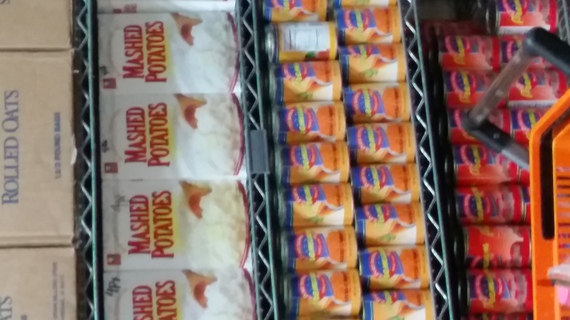 She talks about trying to be an actress, working hard, and staying optimistic, but then she starts to cry when asked about her future.

Also waiting for his turn, Antonio Levin, 59, laments that he is too old to do the construction work he did for decades, so now he does painting, cleaning and the like when he gets work.

"I could do the job," he insists, but "when you hit 50, nobody wants to hire you," he grimly states.

But even for those in less dire circumstances, it is hard to see where the tunnel ends and light begins.

"The trends are such that there's a large group of people who don't have skills for new economy and they will be negatively impacted," no matter what social or retraining programs are made available by the government or the private sector, says Ravi Kanbur, T. H. Lee Professor of World Affairs, International Professor of Applied Economics and Management, and Professor of Economics at Cornell University.

You don't have to tell that to Rita (not her real name), in her 60s, who has lived in suburban Denver for many years and despite a masters degree in choreography -- "which doesn't do me much good these days" -- now does housecleaning to pay the bills as best she can.

She has no money saved, and had to care for her son after he returned as a "wounded warrior" so "I just kind of take whatever job comes my way, so I'm surviving, but just barely."

This massive problem, which I have called "senior poverty" in the past, but which really needs a more descriptive name, persists and grows, and while there are some organizations paying attention to it, such as The WorkPlace in Bridgeport, CT, run by the indefatigable Joe Carbone, the problem is clearly outpacing the solutions.

For every William Eaton, there is the laid off factory worker, the no longer relevant middle manager, the woman -- or man -- burdened by a crippled by punishing divorce, the educated freelance artist who falls ill without health insurance.

Stewart Desmond, executive director of the West Side Campaign Against Hunger, proudly presides over his program, but when one sees how many people wait for their turn for food, it is hard to be overly optimistic.

Cornell's Kanbur, who admits he is more adept at framing the issue than proposing solutions, says that the notion the laid off steelworker can become a well-paid computer programmer is "laughable," and that the programs for helping the long-term unemployed are ineffective.

For the short-term, taxing the highly paid "computer programmer" to pay for the "unemployed steelworker" may be the best we can do while trying to come up with broader answers, Kanbur suggests.

That will certainly not be enough to solve the larger problem, and will likely not be soon enough to help William Eaton, Patricia, Antonio Levin and Rita.

"I'm not suicidal or anything, but I'm living in the moment," says Rita. "I make it into a game," she says, "How can I make these limited resources work?"

For Eaton, making it into a game isn't an option. He lives on food stamps and Social Security, and has to find $450 to pay his storage space bill or they will sell off his possessions.

"I don't know if I can survive the winter. In order to rekindle my life, I need about ten grand," he says. "And I don't see that happening."