More than 1,000 senior citizens and their supporters marched from Chicago's Federal Plaza to the intersection of Jackson and Clark Street Monday morning to protest proposed cuts to Medicare, Medicaid, Social Security and Housing and Urban Development (HUD). At the intersection, more than 40 protesters, 15 of them seniors affiliated with the Jane Addams Senior Caucus, stood or sat in the street, arms linked, blocking traffic.

Amid chants demanding that the cuts be forestalled -- with suggestions for alternatives, including tax hikes -- 43 demonstrators were escorted from the intersection (see video, above) by police and issued citations for pedestrian failure to "exercise due care," or for blocking traffic. Those cited included four protesters using assisted mobility devices and at least one centenarian.

Judy Moses said she was glad to receive the citation--her second in her quest to maintain funding for programs that benefit seniors, following an arrest for blocking traffic in December at a similar protest.

"When I was younger, I never did protests," she said. "I was a silent majority. Now, I'm ready to make noise."

Before the traffic-stopping demonstration, an estimated 1,500 people turned out for a rally at Federal Plaza, where community members and activists spelled out the damage that individuals, and the greater Chicago community, stand to bear if funding is cut from welfare programs that benefit seniors. After decades of payments into social security with the expectation of returns, Chicago's senior citizens expressed shock that the federal support they rely on could be reduced.

"We paid into these programs," Patricia Kerz, pictured below, said. "We don't want them tinkering with our investments."

A woman named Florence spoke on behalf of the Service Employees International Union about her struggles raising a son with cerebral palsy, and her dependence on Medicare and Medicaid for his care, and even his mobility. "If his chair breaks, without Medicare and Medicaid, I can’t afford to fix it," she said.

"I've contributed to society, I've done everything I was supposed to do," she said. "I guess my problem is that I'm not rich. I'm just an ordinary citizen, one of millions, saying to Congress: 'Don't cut Medicare and Medicaid,' and 'make the rich pay their fair share.'"

Sen. Dick Durbin expressed his support for the cause to the crowd, and promised he was about to get on a plane back to Washington where he would advocate for seniors, when he was stopped by Rev. Patrick Daymond, a member of Southsiders Organized for Unity and Liberation (SOUL). Daymond called on Durbin, and other politicians present, including Representatives Jan Schakowsky, Mike Quigley and Danny Davis, to sign a pledge recognizing that the revenue crisis shouldn't "be charged on the backs of old, disabled people."

Each representatives' "yes" was met with cheers from the crowd, and state representatives and aldermen also agreed to be advocates. Rep. Quigley spoke, highlighting areas of overspending in the military, and Rep. Schakowsky, who briefly led the march that followed, thanked the occupiers and called their concerns "a moral issue, not political or economic."

Daymond pointed out the notable absence of Sen. Mark Kirk, and read the statement to an empty suit propped up on a hanger with a portrait of Kirk's face (photo below). Kirk reportedly did not respond to an invitation to the protest.

Rachelle Ankney, a professor at North Park University, brought students to the rally to represent Northside P.O.W.E.R. (People Organized to Work, Educate and Restore), as allies in the seniors' cause.

"We’re so outraged that we keep giving tax breaks to big organizations, and the people who can least afford to pay taxes are paying the brunt of that," she said. "We can't stand by and watch that injustice--that's why we're here."

Participants in the demonstration said they were "proud of the police" for their handling of the demonstration. Individuals occupying the intersection were escorted to a cordoned-off street corner without being handcuffed, and were issued citations, despite many expecting to spend "one or two days in jail," protester and Senior Caucus board member Gene Horcher said.

"[The police were] perfect gentlemen," Horcher said, posing happily with his citation after his third demonstration advocating for social programs to retain funding. "They realize we're fighting for the same thing."

Check out photos from the protest here: 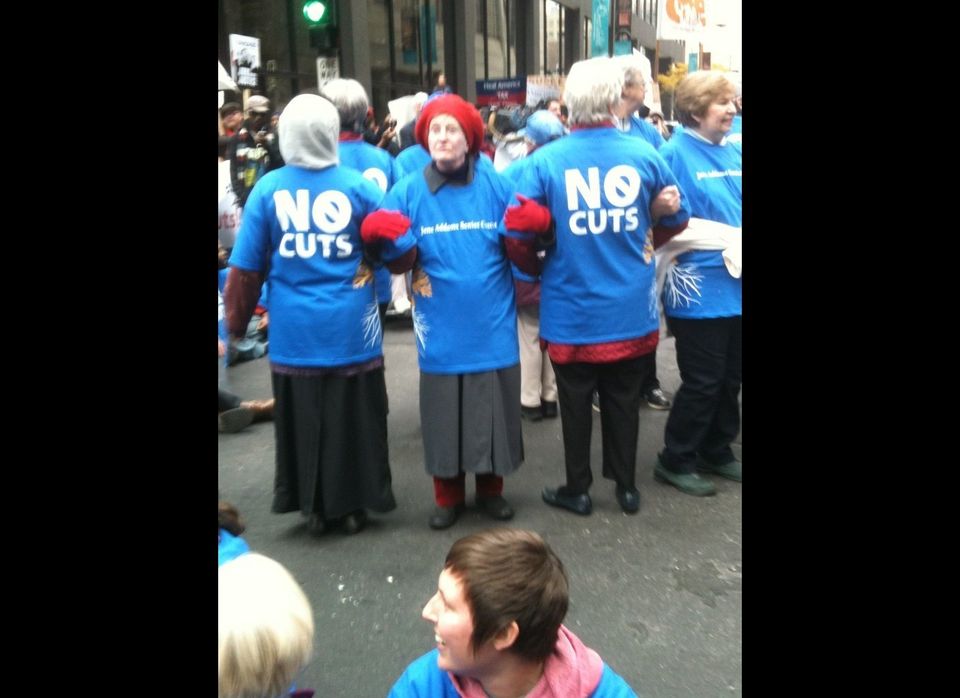 1 / 15
Seniors Occupy Chicago
Judy Moses, in the red hat, was one of 15 seniors cited for protesting at the intersection of Jackson and Clark St. She didn't mind being ticketed. "When I was younger, I never did protests. I was a silent majority," she said. "Now, I'm ready to make noise."
Lizzie Schiffman