It's now only a matter of time before an increasingly well-armed People's Liberation Army attempts to take the Senkaku Islands by force. China calls them the Diaoyutai and claims these Japanese territories in the East China Sea by historical right.

The strategic question is how will America and Japan ("Ameripan") respond to a Chinese thrust - retreat, bombs and bullets, or embargo? The broader existential question is whether a military response would trigger, Sarajevo-style, a broader World War between the three largest economies on the planet and two reigning Superpowers.

On a personal note, I've seen at least one possible future less than 30 miles down the road from where I live in Southern California. At Camp Pendleton, Japanese Defense Forces regularly train with US marines. One of the top war games is defending the Senkakus from a swarming Chinese invader.

Rocks In the Sea? 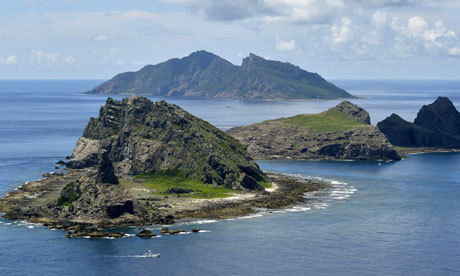 China doves dismiss the Senkaku Islands as "rocks in the sea" not worth risking the nuking of American cities or Japanese blood. On the surface, this seems right:

The Senkakus are five small, uninhabited volcanic islets with a total land area of less than three square miles. The largest and tallest of the islets is Uotsuri. With an elevation a little higher than the Eiffel Tower -- just over 1200 feet - Uotsuri features a barren, hilly, and beautiful landscape.

The smallest islet is Taishō with a narrow spire-like elevation of about 250 feet and a land area no bigger than the size of about 14 football fields. It is one of two islets, along with the 383-foot tall Kuba, that accounts for the name given to the Senkakus by British sailors - the Pinnacle Islands.

There are two very big problems with the "rocks in the sea" critique - one economic, one strategic.

Economically, the UN Law of the Sea Treaty established Exclusive Economic Zones that extend 200 nautical miles in concentric circles around tiny habitable "rocks" like the Senkakus. At stake are not just fertile fishing grounds but also the potential of huge, Persian Gulf-size oil and gas reserves underneath the seabeds surrounding the islands.

Strategically, the Senkaku "rocks" are located about 200 miles east of mainland China, 120 miles northeast of Keelung, Taiwan, and about 100 miles from Ishigaki Island, part of Japan's Okinawa Prefecture.

Here, China has already brazenly illustrated its ability to transform tiny specks of reefs and shoals in the South China Sea into heavily armed, cruise-missile equipped garrisons and command centers replete with 10,000-foot runways. In the hands and bulldozers of Beijing, the relatively far larger Senkakus would pose a significant increased threat both to Taiwan and Japan's Okinawan territories.

In the Clausewitz scenario, China's military grows against the backdrop of a shrinking US naval fleet and a withering Japanese economy. At some point - as early as 2020 - China may seize its "war by algebra" moment and simply overpower Ameripan forces.

In a "wag the dog" scenario, President Xi Jinping and the Communist Party are about to be engulfed by a sea of domestic discontent over economic stagnation or environmental pollution or Orwellian repression. To rally support, Xi orders a full-scale invasion - think Argentina trying to grab the Falklands from Britain here, with a far greater Chinese chance of success.

In a "people's war at sea" scenario, Beijing recruits Chinese commercial fishing vessels to get close to the islands and lay strings of mines. China has one of the biggest mine arsenals in the world and regularly trains its commercial fisherman to carry mines on behalf of the motherland.

And how about the "flotilla" scenario? Private Chinese citizens whipped into a nationalist frenzy advance in a flotilla of "freedom boats," land in the dead of night on Uotsuri, and plant the Chinese flag. All Hell breaks loose on social media and both Beijing and Tokyo are faced with rocks in the sea and hard place choices.

And by the way, to measure Chinese nationalism on the "crazy scale," it's off the charts. In 2012, violent Senkaku demonstrations erupted in over a hundred Chinese cities. One protester wrote: "Even if China is a graveyard, still need to kill all Japanese. Even if no grass grows in China, still need to recover Diaoyu Islands."

Would America have Japan's back in a Senkaku Suicide Scenario as it is required to do by treaty? Then Secretary of State Hillary Clinton said firmly in 2010: "the [Senkaku] islands are part of our mutual treaty obligations." Secretaries of State Chuck Hagel and John Kerry reiterated that pledge. Says Heritage Foundation scholar Dean Cheng:

The United States has consistently said that the US-Japan mutual security relationship covers the Senkakus because those islands are under the administrative control of Japan; and I believe that, as with other treaty commitments, any decision to walk away from that commitment will have devastating consequences.

So if I were to be asked to the White House to talk to the chief executive in a situation where the Chinese have seized the Senkakus, I would be advising the President that he must stand firm with Tokyo, make very clear to Beijing that this would not be allowed to stand, and to extend support, including weapons, including American forces, to the aid of the self-defense forces, in retaking those islands.

Professor Lyle Goldstein of the US Naval War College says the US should do absolutely nothing.

If, however, the US stays on the sidelines, a war between Japan and China could quickly go nuclear. Japanese forces, outnumbered though it may be, are quite capable and may, in the early stages of any war, get the upper hand. At that point, national pride - and perhaps survival of the Chinese Communist Party -- would likely dictate China bombing Tokyo.

As a second scenario, Colonel T.X. Hammes of National Defense University suggests using the same kind of thermobaric weapons Russia has used to great effect in both Chechnya and Syria. Explains Hammes in this exchange with the interviewer:

INTERVIEWER: So if we wipe out every Chinese soldier on the islands, what happens on the mainland in terms of their nationalism?

HAMMES: Well, that's the problem. Nationalism will get going. There's, no accounting for stupidity, so you have to be prepared to fight

Here's still a third "embargo" response option offered up by Brookings Institution scholar Michael O'Hanlon: Japanese and US naval and air forces establish a perimeter and starve out the invaders.

Would today's China allow itself to be so intimidated? The more likely response is some form of escalatory behavior, e.g., a barrage of antiship ballistic missiles raining down on Japanese and US surface ship or ultra-quiet Russian-designed Chinese subs launching torpedoes and cruise missiles.

Until disputes like these are unequivocally resolved, does it really make sense to continue to engage in massive economic trade with China? Such trade only helps Beijing more rapidly build up its war machine at the same time it helps an increasingly aggressive Chinese Communist Party stay in power.

_________________________
Peter Navarro is a professor at the University of California-Irvine. He is the author of Crouching Tiger: What China's Militarism Means for the World (Prometheus Books) and director of Death By China, a documentary history of China's entry into America's markets. Contact www.crouchingtiger.net.

Special Offer: For a free copy of the Crouching Tiger film, send an email to freefilm@peternavarro.com and put "RCD" in the subject line