My favorite movie in the competition at the Tokyo International Film Festival this year -- so far -- is the Japanese contender: Tetsuaki Matsue's 3-D music video, Flashback Memories 3D, featuring Goma, the famed didgeridoo performer, who after severe brain damage and memory loss, caused by a car accident, comes back on stage, just about two weeks after the Fukishima disasters. One intuits that the comeback theme connects to Japan's recovery after March 11, especially since Matsue is the same director who made the hit music video in last year's competition, Tokyo Drifter, about a man who sings the same refrain in the streets of Tokyo for 24 hours after the disaster.

The film is intoxicating in its simplicity. Basically, we see Goma (real name: Hiroki Morimoto) in concert, from shot to shot, playing his long didgeridoo directly towards us (this is 3-D), while in the non-3-D background, we see shots of the local countries he tours in: the sun rising over a Balinese temple or setting in an African savanna, a river in Indonesia, a desert in Arizona, a moonscape in Kyoto, birds flying over the Australian coast. We see the musician wiggle his hips and hands, without variation, in what seems a traditional dance, always wearing a white pressed shirt with two clean blue mandala circles on the breasts. His concentration and joy -- before and after accident -- is mind-blowing. We are right there with him -- literally because of the 3-D -- and feel enlivened ourselves as we witness the intensity of his presence.

This is the only film in 3-D I have ever seen where the 3-D worked as part of the film, instead of as an added contrivance.

Yet Flashback Memories 3D is a movie that is bound to disconcert spectators -- and in fact, many leaving the theater commented that they did not "get it" in the first minutes. After all, throughout the film it does not seem that anything is happening; even the music is repetitive, the same strain repeating over and over for the entire film, reminiscent of a Cannes favorite a few years back of three hours of French singer Jeanne Balibar playing the same chord in a jazz session, then stopping: "OK, on re-commence" (let's begin it again).

But eventually we sense this is the point: an eternal present of hypnotic sound and energy. It is an anti-narrative film, and therein lies its originality and power. The only "movement" in the story is the shifting of the backgrounds and the occasional close-up on Goma's fellow musicians, such as pure-energy percussionist Kosuke Ksuji, sweating and grinning in his white bandana and sunglasses, or drummer Kyoichi Shiino keeping up the beat.

I relished this film which refuses to stay in a canonical box. Enough of contrived stories: This gifted musician really did have a brain injury; he really is recovering on stage through "body memory"; these flashbacks of his concerts -- which he viewed post his brain damage -- are as new to him as to us. When he watched his former concerts, his own self seemed to be "a stranger," he tells us. "I didn't remember the me who is on screen." 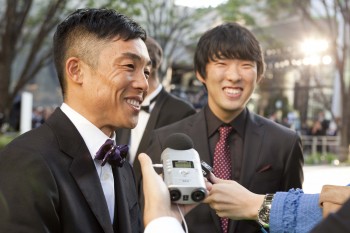 Goma and the Jungle Rhythm Section

Throughout the film, the camera scrolls on a notebook in Japanese handwriting, with reflective comments such as "Being in this condition I now know what freedom is."

The climax is exhilarating. What happens? Nothing, except that the camera moves closer to the man's exalted face and the long didgeridoo thrusts towards us so intimately it is like a phallus moving rhythmically into our own bodies. "There is more to do," the scroll tells us. "There is more to believe. Believe in the future. Everything starts with believing. I believe in the future."

What it comes down to is joy.

The final line is the simplest -- and most beautiful:

"To my future self. Are you smiling, and having a great time?"