Ordinarily, human rights activists would be pleased when the rare major motion picture shining a light on human rights violations comes along. In fact, aside from documentaries, it is very unusual to see issues that Amnesty International has worked on appear on film. However, sometimes a film can so distort an important human rights issue that it may do more harm than good to the cause. 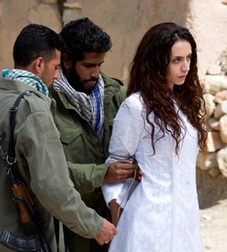 Sadly, this is the case with the new movie opening this Friday, The Stoning of Soraya M, the purportedly true story of the brutal execution by stoning of an innocent Iranian village woman. For one thing, the film is marked by crude story-telling: the main character, Soraya, is merely a mutely suffering victim while her brutish husband, who falsely accuses her of adultery so that he can marry a teen-aged girl, is a cardboard caricature of evil and malice. More importantly, aside from the numerous inaccuracies and implausibilities, the climax of the film -- a bloody and prolonged stoning scene with villagers mercilessly pelting the victim -- is so sensationalized that the audience response is likely to be disgust and revulsion at Iranians themselves, who are portrayed as primitive and blood-thirsty savages.

The film is presented as an indictment of Iranian society as a whole, and the setting -- a remote rural village of about 25 years ago -- as typical of contemporary Iran. In the film, the victim's aunt (who though she is supposed to be an ignorant village woman, inexplicably speaks excellent English and smokes cigarettes with 1940s femme fatale flourishes) is eager to have the French-Iranian journalist, who stops in the village shortly after the incident, smuggle a tape of her relating the story out of the village. She states that she wants the whole world to know what happened there, presumably so that those on the outside (the west?) can rescue the benighted Iranian people from their barbaric practices.

In fact, Iranians themselves -- and in particular Iranian women's rights activists -- have organized and carried out a vigorous campaign against the practice of stoning and have themselves been actively documenting the practice. Opposition to the practice occurs at the highest level of the Iranian legal system; the Head of the Iranian Judiciary announced a moratorium on stoning back in 2002 and it was reiterated in August 2008. Sadly, at least three people have been executed by stoning since then. Interestingly, all three were men.

By criticizing the film, I am not dismissing the importance of the issue. Amnesty International issued a major report on stoning in January 2008, in which it is described how this form of execution is prescribed for adultery -- although in practice, it is usually adultery in conjunction with some other crime, such as being an accessory to the murder of a husband. Furthermore, stonings are carried out in prison yards by government agents, not by members of the community.

Crucially, we must look at stoning in the overall context of executions in Iran. Stonings represent a tiny fraction of executions in that country. Iran executes more people than any other country in the world except for China. In 2008 it executed at least 346, the overwhelming majority of whom were executed by hanging, sometimes for politically motivated offenses, and often after flawed legal proceedings. But again, Iranians don't need people from outside Iran telling them what is good for them because Iranians themselves have taken the lead in opposing executions in their country. The renowned Iranian human rights activist Emadeddin Baghi was recently awarded the prestigious Martin Ennals award, partially for his anti-death penalty activism.

I would urge those who really want to see important social issues in Iran critically examined to check out some of the great films made in Iran, such as A Time for Drunken Horses which deals with poverty among Iran's Kurdish minority, The Day I Became a Woman and As Simple As That about the frustrations experienced by women in Iran, and Santoori, which deals with drug addiction.

An accurate and thoughtful film about executions in Iran would be welcome, but we will still have to wait, as the Stoning of Soraya M is not it.