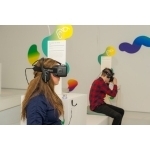 Stepping into the new world of storytelling at the Museum of the Moving Image is a sensory treat experience. I've been hooked since first experiencing some of these innovative forms of narrative at the Tribeca Film Festival 2014. As soon as I put on the head visors, and was transported to a virtually 360 degree world, I was part of the action.

The possibilities for sharing life's stories and identifying with others are incredible through these mediums. In Clouds Over Sidra, created by Gabo Arora and Chris Milk, we enter a Syrian refugee camp and hear from the children who have spent much of their childhoods far from home. The way it is shot from a height, increases the feeling of children talking to adults and the narrator, a young girl, shares her dreams and, her frustrations as she tours us around the camp. We are so close to the action that you can almost smell the breads being baked in the camp bakery.

In Way To Go, I found myself standing instead of sitting and becoming almost dizzy from the power of the interaction with Vincent Morisset's cartoon like character who runs on the edge of a forest path.

Chris Milk's Evolution of Verse is a gorgeous poetic vision of nature with overtones of the film 2001: A Space Odyssey.

You don't need a headset to see the possibilities and yes, magic of this art form. Cube, created by Google's Creative Lab, is literally a cube that tells stories that move and transform depending on how you turn the sides.

If it's smells you're after, Goldilocks and The Three Bears: The Smelly Version, created by Melcher Media and Vapor Communications, delivers whiffs of coffee and chocolate. Now if that could only be combined with the bakery of in Sidra, I'd never leave the home.

John Lennon: The Bermuda Tapes directed by Michael Epstein and Mark Thompson is a great way to remember the genius of Lennon as we are privy to his creative process while writing music in Bermuda.

There are many more wonderful exhibits that offer new ways of looking at the world. The power of these methods, beyond dazzling with the technological virtuosity of the work, is that it can help communicate empathy. In Herders, by Felix Lajeunesse and Paul Raphael, we are invited into the home of people's whose way of life is disappearing, made even more poignant by the dance and prayer of the lone Shaman in the steppes. 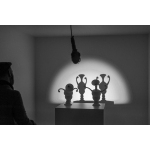 On the third floor, Parade by Laurent Craste is pure magic. you're asked to move a light and make vases dance...and they do. I'll say no more, but the charming guard, Chris, will help you figure it out.

The exhibition can be seen until July 26th and is traveling to the Phi Centre in Montreal, where it will be on view from August 11- September 27.