SEOUL, South Korea -- The two met back in 2005 for the first time. Neither of them were then at the heights of power. But they kept in contact. There was good chemistry in their relations -- so it was said by the people near and around them. In due course, they became the top leaders of their countries, almost at the same time, in 2013. It could have been expected then that Presidents Park Geun-hye of the Republic of Korea and Xi Jinping of the People's Republic of China would further promote good relations between the countries they had come to lead.

Indeed, President Park did not lose time in making a state visit to Beijing, one of the first acts after her inauguration. Relations between Korea and China had already been going well because of the economic ties that had developed over recent decades. China is South Korea's largest trading partner; South Korea is China's fourth-largest trading partner. If for economic reasons alone, good relations with China are a must for Korea.

There are additional reasons, too: Koreans do not harbor the same kind of ill feelings against China which they have in abundance toward another one of their immediate neighbors. Both share a strong sense of injustice about the misdeeds Japan committed in the first half of the last century, which both China and Korea regard as still largely unredeemed. There have even been proposals at public fora by Chinese scholars and politicians of good standing for a formal alliance between the two countries against Japan.

Some Koreans see the Chinese as sharing more common traits with them than their compatriots in the North.

Popular culture has also mixed along with the high tide of trade relations. Some Chinese have adopted the lifestyle of Koreans, sharing the same fashions and other interests, including cosmetic surgery, TV soap opera dramas and pop music. The Chinese are valued tourists in Korea. I would even venture to say that some Koreans see the Chinese as sharing more common traits with them than their compatriots in the North.

Perhaps for the same set of reasons, the Chinese have been distancing themselves from the other occupants of the Korean Peninsula. To most Chinese, North Korea began to look more distant than South Korea, regardless of their past relations. The so-called "alliance-in-blood" between Beijing and Pyongyang was beginning to fade into remote history. The two leaders met again and again, reaffirming and enhancing good will and cooperation between themselves and, of course, the countries they represented. So far so good.

The moment of truth in relations between China and the Republic of Korea finally came when President Xi stood side by side with President Park last September on the viewing stand in Beijing for China's military parade commemorating the 70th anniversary of victory over Japan. One could not help but ask the question: Was this occasion a remembrance of past sufferings finally overcome by the heroic struggle of the Chinese people, or was it showing off the military might of a born-again Chinese empire? 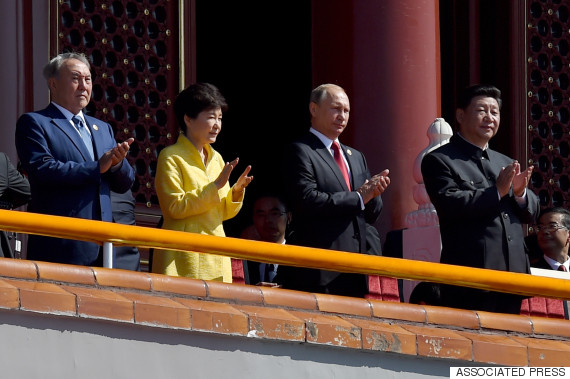 Xi Jinping and Park Geun-hye with other world leaders during a military parade to mark the 70th anniversary of Japan's surrender during World War II in Beijing. (Wang Zhao/Pool Photo via AP)

Certain leaders were rather conspicuous by their absence. No major Western leader was there. But one absence in particular stood out more than the others: Kim Jong Un, the leader of North Korea who had already been in power for nearly four years. This raised other questions. What had he been doing during all those times when Mr. Xi and Madame Park were meeting on so many occasions and in so many places? Has Madame Park simply preempted Mr. Kim in meeting with Mr. Xi?

A wisp of smoke began to emerge out of nowhere once Park returned home exuding confidence and trust. Rumors circulated in Seoul that there had been certain weighty agreements between the two leaders about the future of the Korean Peninsula. No details have ever emerged from the smoke. Were promises made in Beijing?

Some active minds surely entertained a flight of historical imagination, connecting today's relations to the 7th century when Silla -- which happens to be the ancestral home of Park -- annihilated Goguryeo, from which Kim hailed, in an alliance with China. That victory ultimately led to the unification of rule under the Silla regime. Whatever truth may have been contained in this analogy, there certainly was enhanced expectation in Seoul that it now had a reliable guarantor of its security in China, the ostensible ally of the North.

Then there came another incident that generated a more malodorous smoke signal. North Korea tested a nuclear weapon for the fourth time in complete disregard of international concerns. Pyongyang even boasted that it was a hydrogen bomb. Almost automatically people looked in the direction of Beijing. However, the response was at best disappointing. Beijing did not appear to share the anxiety over the ever-increasing security threat felt so intensely in Seoul, though it did stop short of repeating the time-honored mantra of urging restraint on both sides and peaceful resolution of the problem.

The real reason Xi befriended Park, even at the expense of estranging Pyongyang, was to detach, or at least to distance, South Korea from the network of American alliances in Northeast Asia in which Seoul is regarded as its weakest link.

Subsequent talks between Seoul and Beijing revealed that the two leaders never agreed on anything concrete but were just talking at cross purposes. Beijing never shifted its bottom line of supporting North Korea. The real reason Xi befriended Park, even at the expense of estranging Pyongyang, was to detach, or at least to distance, South Korea from the network of American alliances in Northeast Asia in which Seoul is regarded as its weakest link.

Continuing to defy reinforced U.N. sanctions in the wake of the tests, all manner of bombast issues day after day from Pyongyang. Typically, the Kim regime boasts it can and will turn the houses of government of its enemies into ashes. Xi and Park met again at the Nuclear Security Summit in Washington last week. President Xi reaffirmed his commitment at that meeting to faithfully adhere to the tougher new U.N. sanctions on North Korea. We will have to see how that goes.

For its part, the South is contemplating building a missile shield to protect itself from the North since it has become clear that China is mostly stern talk and little effective action when it comes to curbing Kim Jong Un. Beijing is upset about this proposal because it suspects that, as long as the Republic of Korea is embedded in the U.S.-led alliance system, a missile defense system in the region would be another part of the arsenal aimed at containing China's rising power.

Peace and stability, not only on the Korean Peninsula but also in the whole region, will be more visible when the fire of truly transformed relations with China exists behind the smoke signals. For that to happen, South Korea must be assured of its security.