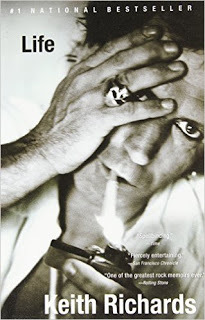 Two of the most iconic faces of the 20th and 21st Century look curiously alike, those of Samuel Beckett and Keith Richards, and you wonder whether maybe Beckett could have been a fitting accompanist to "Sympathy for the Devil" or conversely whether Richards, might have been a perfect Nagg, the father of the biblical Hamm, who inhabits a dustbin in Endgame. It would be weird to see Richards performing without his axe, but the same bemused expression, a cultivated stoicism, an inimitable cocktail of pomposity, demandingness and complacency would make the rock star the perfect vehicle for the Beckett character. And imagine Beckett as a Stone, certainly he's stone faced enough. Imagine the legendary perfectionism employed in the service of Richards' improvisatory style. Legendarily Richards never performs the same riff twice. His "Sympathy for the Devil" is always sui generis, which might not fit with the intractable nature of Beckett's mis en scene, but certainly conforms to the spirit of his oeuvre and its all around attempt to render fractured consciousness. If consciousness is a crucifixion, then Beckett provides the stigmata. On the most basic level the great playwright and rock star so totally share the same weathered look that one might assume they'd both either attended the same Parisian sun tan salon or that both had competed in the America's cup in another life. The lined faces, the haunted eyes, Beckett and Richards are fellow travelers--in fact ontological twins. Beckett may never have tried his hand at rock, but Richards gave his writing career a start with a very Beckettian sounding memoir called Life.