Sepp Blatter announced Tuesday that he is stepping down as FIFA president. The development comes on the heels of reports that he is being targeted as part of a federal investigation into corruption within the world's soccer governing body.

"I appreciate and love FIFA more than anything else, and I only want to do the best for football and for FIFA," Blatter said during a press conference.

Blatter said a new president will be elected "as soon as possible," but he will continue his functions until that happens.

"What matters to me more than anything is that when all of this is over, football is the winner," according to prepared remarks posted by FIFA.

Blatter had just been reelected on Friday. He said he ran for the unprecedented fifth term because he was "convinced it was the best option for football."

"This mandate does not seem to be supported by everybody in the world of football," Blatter said.

Blatter's announcement comes a day after The New York Times published a report that Blatter's number two and FIFA secretary general, Jérôme Valcke, is believed by U.S. authorities currently conducting an investigation into FIFA's corruption to have made transactions of $10 million. That money, it said, was part of a bribe in exchange for South Africa being awarded the host of the 2010 World Cup.

Both the Department of Justice and the U.S. Attorney's Office for the Eastern District of New York declined to comment on Blatter's resignation or reports that he was being investigated.

However, later on Tuesday the law enforcement officials confirmed to the Times that a federal corruption investigation centered around Blatter. 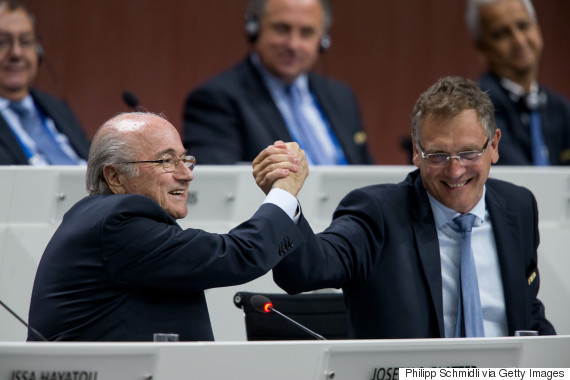 In his remarks, Blatter acknowledged that reform is needed.

"The challenges that FIFA is facing have not come to an end," he said. "FIFA needs a profound restructuring."

Some of those changes, Blatter suggested, was the size of FIFA's executive committee, as well as a "limitation on mandates and terms of office" for both the committee and FIFA president.

"I have indeed fought for these changes, and my efforts have been counteracted," he said.

The next FIFA congress is scheduled to be held on May 13, 2016, in Mexico, but Blatter said to wait that long for a new president would "only delay matters." He called upon FIFA's executive committee "organize an extraordinary congress as rapidly as possible" to elect his successor.

Per FIFA rules, the earliest an election could be held is in four months.

Blatter said since he will not run, "of course," he is "now free from the constraints of an election."

"I will be in a position to focus on implementing ambitious and profound reforms to follow on our initial efforts," Blatter said.

Blatter was widely expected to win his reelection, despite coming days after U.S. Attorney General Loretta Lynch announced a 47-count indictment and a number of arrests of FIFA officials for alleged corruption spanning two decades.

Jordan's Prince Ali bin Hussein was viewed as Blatter's strongest threat for presidency. However, during Friday's election, he withdrew.

In an interview with CNN's Christiane Amanpour on Monday, Prince Ali said he would have "immediately resigned" had he been in Blatter's position.

"He is responsible, and I hope that, at some stage, he actually does take responsibility for actions. Because he is the president of a governing body of the most popular sport in the world," Prince Ali said.

Prince Ali speaking with Amanpour again on Tuesday following the news of Blatter's exit was critical the soccer chief.

He said Blatter has not been "not exactly been very forceful" on the issue of human rights violations in Qatar's preparations for the 2022 World Cup.

Prince Ali also did not rule out running again for FIFA presidency.

"It has been a very difficult campaign," "but I am at the disposal of all the national organizations who want a change."

"I'm there for them and I think we need to salvage the situation," he added.

I have been reflecting deeply about my presidency and about the forty years in which my life has been inextricably bound to FIFA and the great sport of football. I cherish FIFA more than anything and I want to do only what is best for FIFA and for football. I felt compelled to stand for re-election, as I believed that this was the best thing for the organisation. That election is over but FIFA’s challenges are not. FIFA needs a profound overhaul.

While I have a mandate from the membership of FIFA, I do not feel that I have a mandate from the entire world of football – the fans, the players, the clubs, the people who live, breathe and love football as much as we all do at FIFA.
Therefore, I have decided to lay down my mandate at an extraordinary elective Congress. I will continue to exercise my functions as FIFA President until that election.

The next ordinary FIFA Congress will take place on 13 May 2016 in Mexico City. This would create unnecessary delay and I will urge the Executive Committee to organise an Extraordinary Congress for the election of my successor at the earliest opportunity. This will need to be done in line with FIFA’s statutes and we must allow enough time for the best candidates to present themselves and to campaign.

Since I shall not be a candidate, and am therefore now free from the constraints that elections inevitably impose, I shall be able to focus on driving far-reaching, fundamental reforms that transcend our previous efforts. For years, we have worked hard to put in place administrative reforms, but it is plain to me that while these must continue, they are not enough.

I have fought for these changes before and, as everyone knows, my efforts have been blocked. This time, I will succeed.

I cannot do this alone. I have asked Domenico Scala to oversee the introduction and implementation of these and other measures. Mr. Scala is the Independent Chairman of our Audit and Compliance Committee elected by the FIFA Congress. He is also the Chairman of the ad hoc Electoral Committee and, as such, he will oversee the election of my successor. Mr. Scala enjoys the confidence of a wide range of constituents within and outside of FIFA and has
all the knowledge and experience necessary to help tackle these major reforms.

It is my deep care for FIFA and its interests, which I hold very dear, that has led me to take this decision. I would like to thank those who have always supported me in a constructive and loyal manner as President of FIFA and who have done so much for the game that we all love. What matters to me more than anything is that when all of this is over, football is the winner.