WASHINGTON -- A few weeks ago, just before I went on vacation with my family, I went to my basement and retrieved a legal-sized white envelope and an old computer tote bag.

I brought them to the office, where I cut a rectangle from the bag’s outer flap pocket, and sealed it and the envelope in Ziplock bags. Then I slipped them into a FedEx pouch, and sent them to a lab in New Jersey.

In the envelope and the bag was a clumpy, powdery gray dust -- dust that used to be the south tower of the World Trade Center, and that coated me and thousands of others with a force that pushed it deep into pockets, briefcases, ears and lungs on Sept. 11, 2001.

After 10 years, I thought maybe it was time to finally understand my chemical 9/11.

"The dust cloud is a complex mix of hundreds -- and possibly thousands -- of chemical substances, a small portion of which we have a relatively good understanding of what was present, and the majority of which we don’t have any idea what it was," said Dave Newman, an industrial hygienist with the New York Committee on Occupational Safety and Health.

"Think about the amount of material from that collapse," said Dr. Paul Lioy, the deputy director of Environmental and Occupational Health Sciences Institute at Rutgers. "Ten million tons of stuff -- disintegrated into nothing."

As Newman and others noted, thousands of tests had already been done. But this dust had been captured in the moment, from the air, before it settled to the ground. It was the dust I breathed.

It had been part of the cloud that blotted out light and sound and lasted long enough for me to begin to wonder if it would let the oxygen return in time. It was so dense as it subsided that I could hear the particles raining to the ground with a dry, hissing, crackling.

"It had enough pressure to get into just about anything," said Lioy, who has studied extensively the 9/11 dust and its health effects.

I didn’t really want to think about what it was at the time. I knew it was nothing good, and as the cloud billowed around and over the skyscrapers and St. Paul’s Church on Broadway with unbelievable speed, I yelled to the people sheltering with me behind some pillars "Breathe through your shirt."

"It’s nasty stuff," said Philip Landrigan, chairman at the Mount Sinai School of Medicine and a lead 9/11 health researcher. "Two thirds of the mass was pulverized concrete. That was very, very caustic. It had a pH of 10 or 11, which is why the stuff burned people’s eyes and noses and respiratory tracts and the esophagus."

Those high, alkaline pH levels are what doctors believe is responsible for the notorious and increasingly deadly "Trade Center cough."

"It burned the lining of the respiratory tract," Landrigan said. "The initial burning then turned into a scar. And the scar results in contractions that destroy the architecture of the lung."

A study of some 27,000 trade center responders released Tuesday by Landrigan and others at Mount Sinai found that 42 percent had lung damage, 42 percent have sinusitis and 39 percent have GERD.

I’m not one of them, although a 9/11 advocate John Feal convinced me to sign up for Mount Sinai’s monitoring program shortly before last year's anniversary. I had wanted to keep some distance -- I didn't want any benefits from something I covered as a reporter, and since I am healthy, I didn't really want to go looking for trouble.

But Feal, who runs the Fealgood Foundation, argued that no doctors anywhere else in the world would be more able to spot something before it grows deadly. His organization has recorded the deaths of dozens of Sept. 11 responders from cancer that many believe stems from 9/11.

With a wife and a daughter, why wouldn't I want to know as soon as possible if something was wrong? 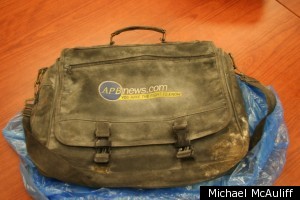 And perhaps the dust analysis could shed a little light on what may lie ahead, as well. Maybe that’s why I hadn’t been able to throw it out. I had started to rinse the dark gray material down the drain that night 10 years ago. Instead, I put some in an envelope from the Empire Hotel, and later stuffed the tote into a knotted blue plastic recycling bag.

I preserved the dust and lived with that question mark in my life, my own piece of the terror sown across the nation by events that hadn't seemed possible.

Because, while I covered the attacks for ABCNews.com, I didn’t think those two towers could fall. They themselves were a certainty -- even as they burned above me, gusting thunderheads of smoke that painted a new dark sky between the ground and vibrant blue of the day.

Even as a boiling storm poured from the immense buildings, raining ash, office papers and debris, they still felt bigger than nature, immovable and permanent -- a 1,727-foot compass needle that both guided New Yorkers and signaled national strength.

Where I stood back then was a block west of the Trade Center, with the south tower blocked from view. And even when firefighters yelled that it was leaning, I didn’t really imagine it could fall.

It did, of course, crushing so many lives in a cataclysm that destroyed much more than a landmark. And as they went down, they created their own metaphor for the sudden, profound sense of fear and uncertainty left in the aftermath –- that enormous, racing cloud of dust that carried toxic threats we have yet to understand.

I received the analysis from the International Asbestos Testing Labs of Mount Laurel, N.J. -- which has tested thousands of other samples for the EPA -- while I was away, and opened it Tuesday.

In a letter, lab director Frank Ehrenfeld explained that they found what they expected: "a mixture of many components all very fine."

The pH was characteristically high -- 9.6 and 10.2 -- which Newman said had probably decreased over the 10 years because of moisture.

About half the material was "non-fibrous" including polystyrene foam, vermiculite mineral, combustion product (carbon soot), mineral dust of gypsum, calcite, dolomite and quartz. The other half was fibrous material including "cellulose (wood and paper fragments), fibrous glass such as glass wool with yellow resin coating, Fiberglass, colorless mineral wool, refractory ceramic fibers, limestone, calcites, carbon fibers, synthetics (including fragments of cloth) and chrysotile asbestos associated with the lime and carbonate insulation debris."

Metals included small amounts of lead, chromium, zinc and cadmium. Some elements of the dust that were known to be dangerous -- such as PCBs and dioxin -- we did not test for because they are volatile, more expensive to detect and likely were no longer present.

One element I appear to have been spared was less caustic, but much grimmer.

"Not here, but previous testing of other thousands of samples in the past also detected very fine fragments of photographs, fingernails, bones, hair, and tissue," Ehrenfelld said in his report.

No one can tell me why I have not gotten ill the way so many have, especially thousands of the people caught in those tissue-searing clouds. In fact, in my exam at Mount Sinai, my lung capacity was as high as 140 percent of what it should be for a 45-year-old my size.

Just breathing through a shirt might have made the difference. "That simple action may have saved you a lot of trouble," Landrigan said.

But no one really knows, and no one can stay what’s in store for me or the tens of thousands of people who lived or worked in the disaster zone.

"Science is hard," said Rutgers’ Lioy. "It’s not perfect, and when you’re dealing with a situation that was immediate and had high consequences for a short-term event, it’s harder."

Cancer is a growing threat, and the researchers think both evidence and incidence of 9/11-linked cancers will escalate soon.

"Going forward, as we get into the second decade and beyond, things like chrysotile, which is a form of asbestos, are going to emerge as the big players, because now we’re getting into the time frame when the cancers from 9/11 are very likely to increase in numbers," Landrigan said.

But what that means for any individual is impossible to say. Best to be wary, Newman warned, whatever the dust analysis says.

“I don’t need to read a report,” Newman said. “If you were caught in the dust cloud, my level of concern is pretty high for anybody.”

I was hoping for some understanding -- a solid bit of information that tells me something about where I stand after a decade. I got some, but less from the sample than from the evidence of not being ill.

"That’s certainly better than lots of other people, and probably speaks to the fact that you may have dodged a bullet," said Landrigan. "If I were a betting man and if I got through 10 years without any symptoms, I’d take that as a good omen."

A good omen, yes. But what that dust also says to me is that even as we all search for some resolution 10 years after 9/11, it isn’t really there.

The "war on terror" is still reshaping our laws and daily existences. The bill Congress passed to help the victims of 9/11 -- who are still emerging -- expires in five years, which is about when researchers expect they finally will better understand whether the dust is giving people cancer.

What the dust and analysis really shows is that we cannot put Sept. 11 in the past. At least not yet.

“We’ll never get full closure on this,” said Lioy. “It’s a lingering consequence of what Osama bin Laden did -- a true act of terrorism in its worst sense.”