Voters in seven states are hitting the polls on Tuesday to decide the outcome of some extremely competitive and bitter primary races.

In Delaware and New Hampshire, insurgent candidates running with Tea Party support are looking to upset establishment-backed contenders in Republican Senate primaries. Some pretty big conservative names have waded into the highly-anticipated match-ups.

Both Christine O'Donnell, who is taking on U.S. Rep. Mike Castle in the First State, as well as Ovide Lamontagne, who is facing off against State Attorney General Kelly Ayotte in the Granite State, have been endorsed by conservative kingmaker Sen. Jim DeMint (R-S.C.).

Sarah Palin has also injected herself into a handful of today's races. The former Alaska Governor has offered her seal of approval to O'Donnell, aligned herself with the establishment in backing Ayotte, and also has endorsed Brian Murphy in Maryland, who is competing against former Gov. Bob Ehrlich for the Republican nomination for the state's governorship.

Primary action is also set to go down on Tuesday in Massachusetts, New York, Rhode Island, Wisconsin, as well as in Washington, DC.

Here's a rundown of the hottest September 14 primary fights: 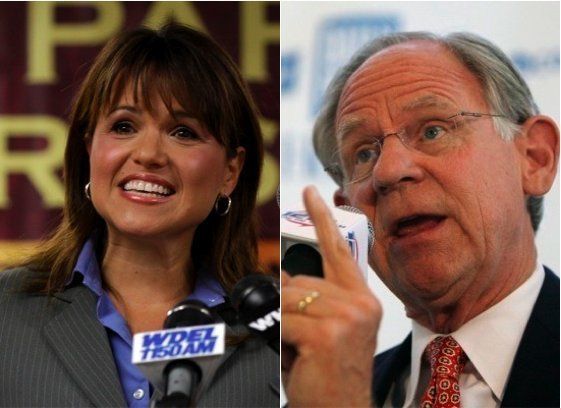 1 / 6
Delaware: GOP Senate Primary
Delaware's Republican primary for Senate is too close to call as voters take to the polls on Tuesday to decide the race between establishment candidate U.S. Rep. Mike Castle and Tea Party-backed contender Christine O'Donnell. HuffPost's Mark Blumenthal <a href="https://www.huffpost.com/entry/new-poll-shows-odonnellca_n_714249" target="_hplink">reports</a> on the latest dispatch of numbers out on the bitter match-up: The <a href="http://publicpolicypolling.blogspot.com/2010/09/too-close-to-call-in-delaware.html" target="_hplink">new survey</a> from automated pollster Public Policy Polling (PPP) shows "a real possibility of a major upset," with Tea Party conservative Christine O'Donnell holding a three-point advantage (47% to 44%) over Congressman Mike Castle that falls within the poll's margin of error. PPP says the race is now "too close to call." O'Donnell's candidacy has been endorsed by the likes of <a href="https://www.huffpost.com/entry/sarah-palin-cuts-robocall_n_714734" target="_hplink">Sarah Palin</a> and conservative superstar South Carolina <a href="http://www.politicsdaily.com/2010/09/11/jim-demint-backs-tea-party-candidate-christine-odonnell-in-dela/" target="_hplink">Sen. Jim DeMint</a>. ;however, some big names on the right seem less than enthused with the GOP hopeful’s campaign. Specifically, the top dogs at Tea Party organizing group FreedomWorks, Chairman Dick Armey and President and CEO Matt Kibbe, <a href="https://www.huffpost.com/entry/dick-armey-refuses-to-end_n_714530" target="_hplink">said</a> on Monday those chose not to endorse O'Donnell because they have doubts over whether she can win.