September was a great month for chess.

The world's top-rated chess player Magnus Carlsen played his first official tournament in America, his last event before the world championship match against the titleholder Vishy Anand in November.

The Chinese GM Hou Yifan regained the women's world title. The FIDE Grand Prix winner Veselin Topalov relaxed in the Czech town of Novy Bor while the last GP event in Paris spilled into October with a nice but sad victory for Fabiano Caruana.

Within a few years Rex Sinquefield transformed Saint Louis into the center of professional chess in the United States. He founded the Chess Club and Scholastic Center of Saint Louis and brought in the Chess World Hall of Fame. The well-financed U.S. championships and visits by world-class players are yearly attractions, drawing the attention of the media.

The Sinquefield Cup, a double-round tournament with the participation of Carlsen, Levon Aronian, Hikaru Nakamura and Gata Kamsky, was the most significant event in Saint Louis since the 1886 first official world championship match between the Prague-born William Steinitz and Johannes Zukertort, a Polish-born player who settled in London in 1872.

Steinitz began the match in New York with a disastrous 1-4 score, but he overcame the deficit in St. Louis, winning three games. From that moment on, Zukertort was in Steinitz's grasp. Exhausted and ill after the match moved to New Orleans, he lost almost without resistance. The final tally was 12.5-7.5 in Steinitz's favor.

Three seems to be Carlsen's magic number in Saint Louis as well. He finished first undefeated, winning three and drawing three games. His victory was far from easy. The start belonged to the local hero Nakamura with two wins and one draw. He won the first game with a little luck. 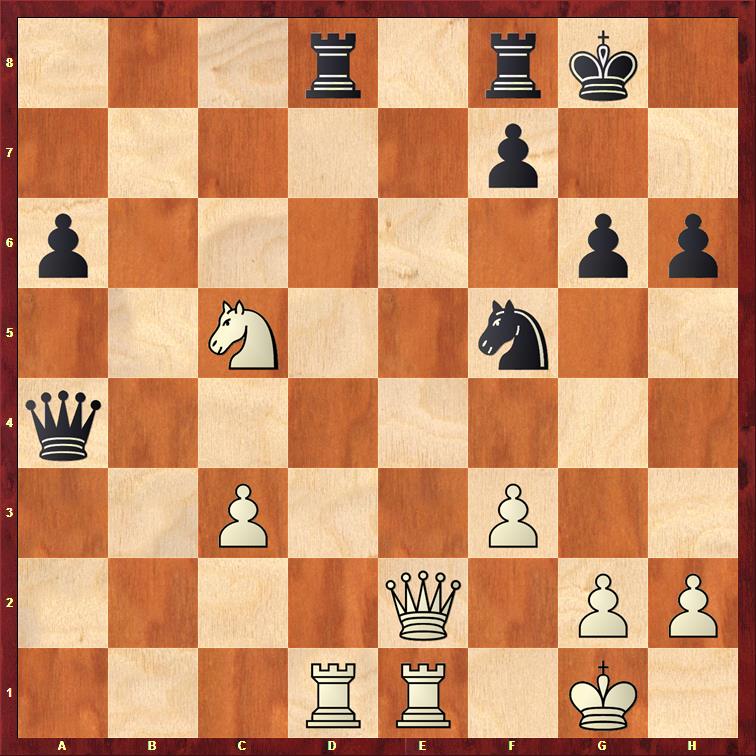 Nakamura was ready to split the point after 30...Qc6, but Aronian pleasantly surprised him, hanging the exchange.

The move will find its way into the gallery of blunders. Not even the world's best are immune from mistakes.

In the second round Nakamura played well in time pressure and defeated Kamsky. He outplayed Carlsen with the black pieces, but the Norwegian defended well and secured a draw.

After the first half Nakamura was leading the field, but he had problems in the past to convert leads into tournament victories. Like a "rabbit" in track and field races, he would give his all to lead other players and help them to win by dropping out of sight.

He did it again against Aronian, rather recklessly sacrificing a piece. Nakamura lost and allowed Carlsen to pass him. But Hikaru still had a chance in the key game of the tournament: a victory with the white pieces against Magnus would have propelled him back to first place. 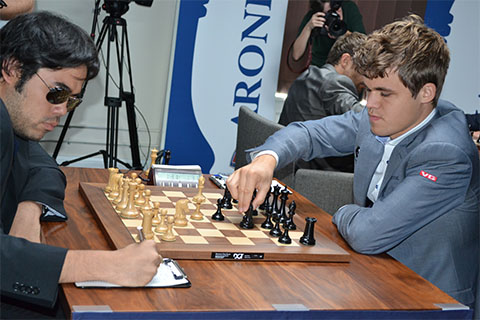 Carlsen met the Spanish opening with the Berlin defense, hotly contested in the Steinitz-Zukertort match, and the game got on the way. 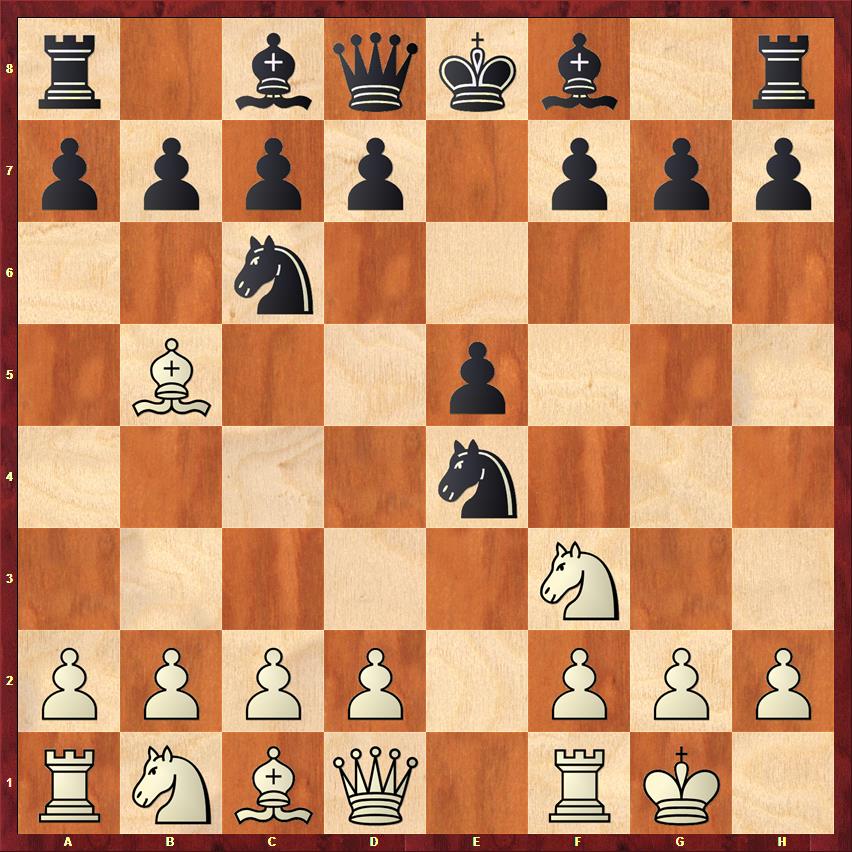 The most common move at the 1886 world championship match between William Steinitz and Johannes Zukertort. The challenging 5.d4 deflates the game into a queenless endgame after 5...Nd6 6.Bxc6 dxc6 7.dxe5 Nf5 8.Qxd8+ Kxd8. Although this has been known for more than a century, it became popular after the year 2000 when Vladimir Kramnik beat Garry Kasparov in the world championship match in London, turning the defense into the Berlin Wall. Without the queens on the board Kasparov didn't find a way to break through. 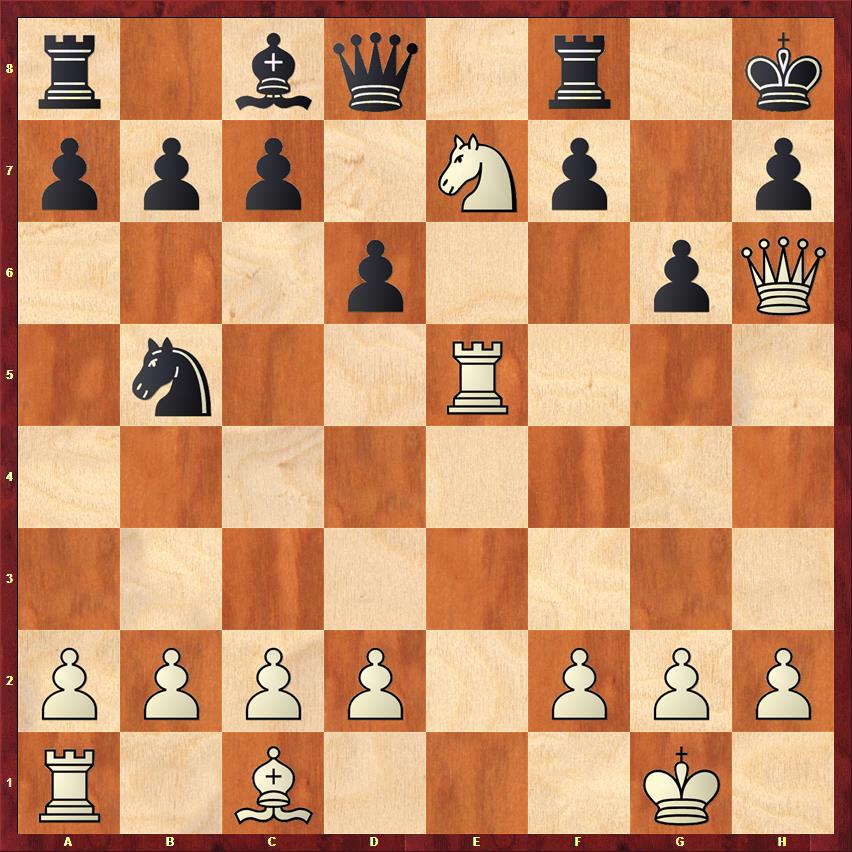 Going all the way home, not blocking the d-pawn, has been popular lately. After 7.Nc3 comes 7...Nxb5! for example 8.Nd5? Nbd4! winning a piece. Black's last move was overlooked by Lasker.

Steinitz's 7.Bd3, aiming for the kingside, can be met by Zukertort's 7...0-0 8.Nc3 Ne8. This Lasker's retreat was adopted in the early 1960s by the Czech GM and two-time world candidate Miroslav Filip.

The players reached a position from the 4th game of the 1886 match Steinitz-Zukertort in which white played 9.d4. Nakamura wants to use his d-pawn to cover the square e4. 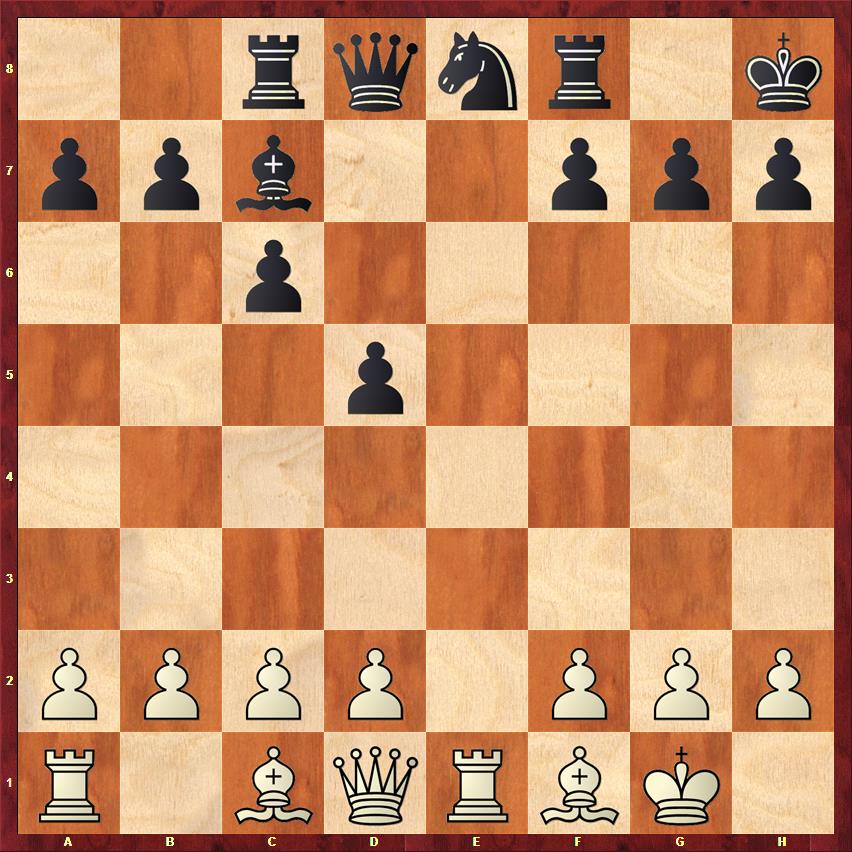 The white pawns didn't move and the pieces are reshuffled but undeveloped on the first rank. Only the rook on the open e-file is happy. It is the price the players are willing to pay today for a bishop pair. And their computers may even encourage it.

A new move. White's bishop pair has a symbolic advantage only. Carlsen can get space on the kingside before white can mobilize his forces.

The chances are equal now.

Unfortunately, white's pseudoactivity 24.Re6 can backfire after 24...Qd8 - threatening Nf7-g5 - 25.Bxf4 Bxf4 26.gxf4 Qh4 and black has plenty of counterplay on the dark squares.

The points of entry along the e-file are covered.

Weakening the pawn on g3 gives black a new target. 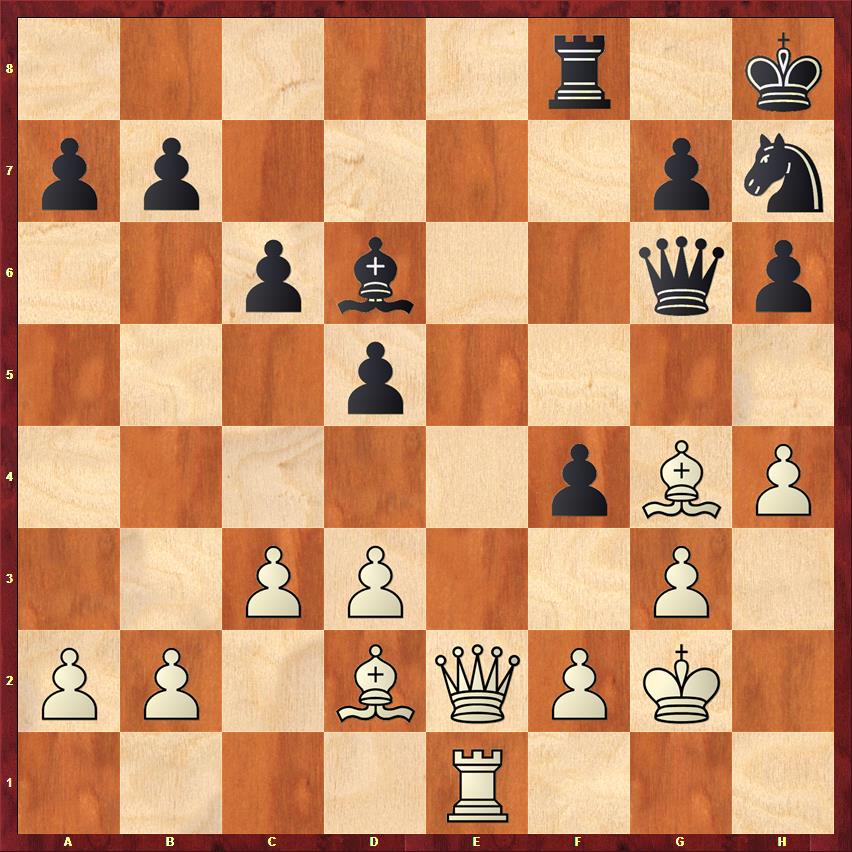 Nakamura decides to repeat the moves. 29.Qe6 is met by Qxd3!

The draw brings us back to the match Steinitz-Zukertort. Eight games out of the first nine were decisive. And the only draw in Saint Louis seemed very suspicious to the onlookers. They did not understand why the players could negotiate the result during the game. Something was fishy with the game of chess. The next day, according to news reports, the audience dwindled. Draws and how to avoid them are very much on the mind of chess fans today. The remedy remains the same: play with a fighting spirit. It worked for Bobby Fischer as it does for Carlsen, Nakamura and many others who are willing to fight until only two kings remain on the board.

Final standings of the Sinquefield Cup: 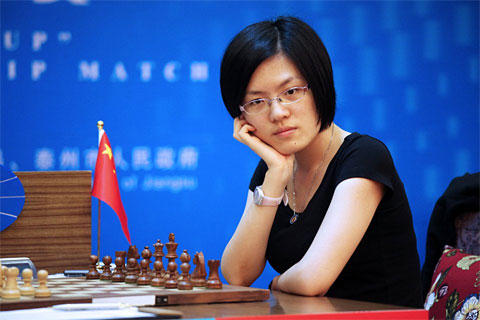 At the age of 12, Hou dreamt of overtaking the all-time best woman Judit Polgar. In 2010, Hou became the youngest women's world champion at the age of 16. She defended the crown next year against Humpy Koneru of India. In 2012 she was knocked out in the second round of the Women's championship, but became a challenger by winning the 2011-2012 FIDE Women's Grand Prix. Now at 19, she is a university student and her ambitions are more modest. She prefers to by happy and healthy.

Nakamura went straight from Saint Louis to Paris to participate in the last FIDE Grand Prix tournament. Things were looking up for him when he met Fabiano Caruana, one of two players with a chance to qualify for the 2014 Candidates by winning the event alone. 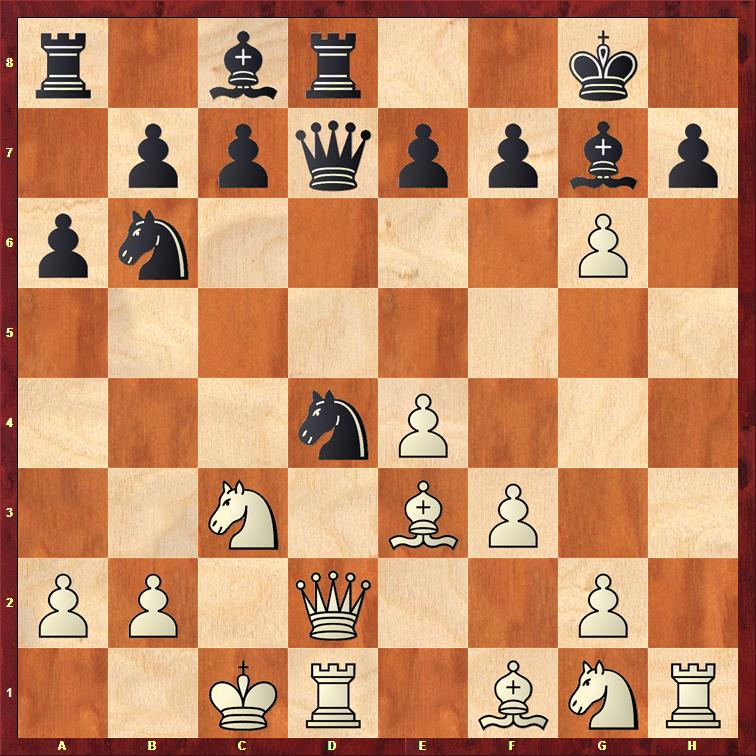 Nakamura just took the pawn on g6. Caruana had two ways of recapturing it and he chose the wrong one.

The skewer wins material and the game is over. Hikaru could have also played 16.Qf4 e5 17.Rxd4 wins.

Having a queen for a rook, white is winning. Caruana dragged the game out till move 34 before he resigned.

The loss must have been devastating for Caruana. Nakamura, on the other hand, moved to the lead by adding a win against Vassily Ivanchuk, who overstepped time in a roughly equal position. Hikaru could win it all, I thought, but there was one problem: his opponent was the 45-year-old Boris Gelfand, the 2012 world championship challenger. He was Nakamura's "angstgegner" and no matter what Hikaru did against the Israeli GM, it usually turned out badly. Yet again, he could not overcome the psychological barrier. 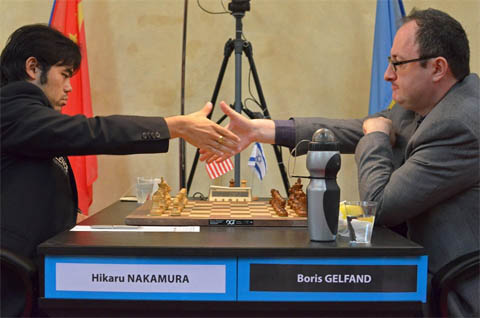 There was an additional twist: Hikaru has never beaten Gelfand with the white pieces in a major tournament and it was his seventh loss in Paris.

The win helped Gelfand to share first place with Caruana with 7/11. Nakamura and Etienne Bacrot finished a half point behind the winner.
Caruana almost made it to the Candidates, but he needed to win it alone. The Azerbaijani GM Shakhriyar Mamedyarov clinched the last spot instead.

The winner of the FIDE Grand Prix Veselin Topalov went to Novy Bor, a Czech town of glass artists, to play a six game match against Viktor Laznicka. It was an equal fight at first, but the Czech GM lost due to his habit - the time trouble. Topalov won 4-2 and took home a nice glass trophy. 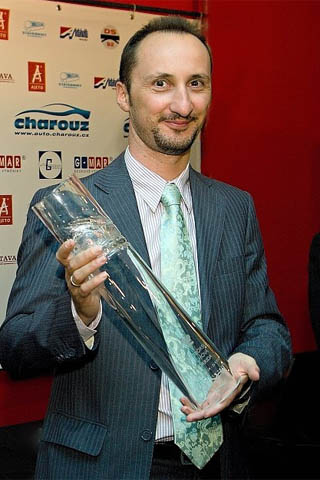 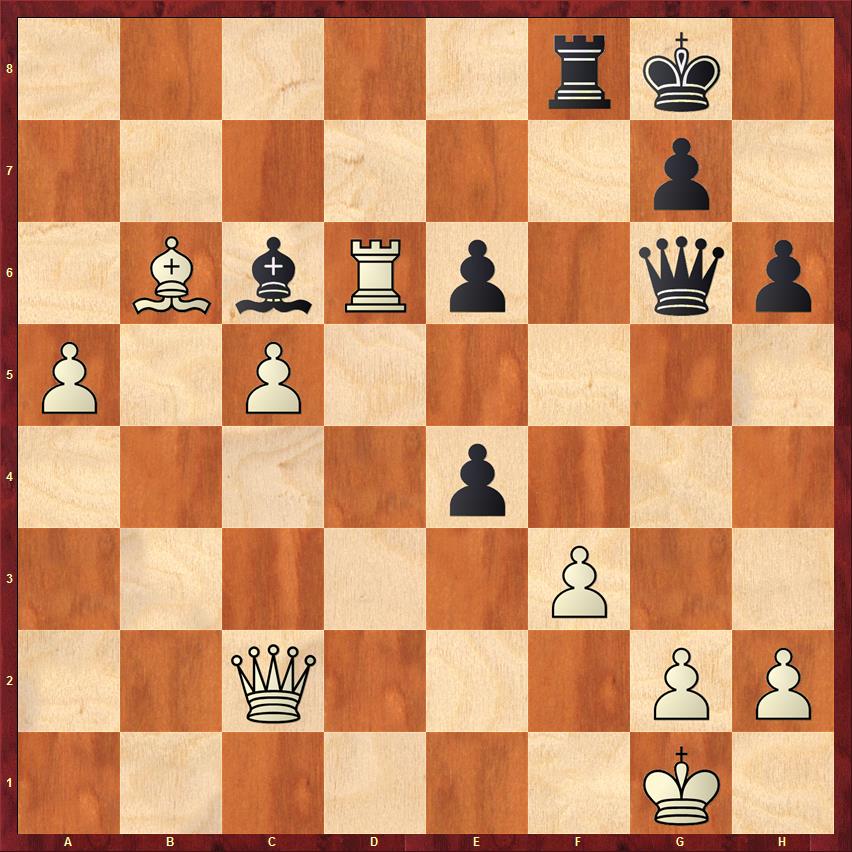 A nice piece sacrifice. The queen goes out of the pin and protects the square d8, not allowing white to exchange the rooks.

Greed loses. Laznicka pegged his rook and bishop behind the c-pawn and they can't help the white king. Instead of taking the bishop, white could have rescued the game with a timely deflection: 32.h4!, for example