The nation's payrolls rose by only 142,000 last month, and job gains for July and August were revised down by 59,000, suggesting the pace of job growth has slowed in recent months. The labor force contracted and weekly hours work also declined slightly. Hourly pay was unchanged over the month and rose 2.2 percent over the past year, around the same pace it has been at for numerous years.

In other words, what we have here is a surprisingly weak jobs report -- analysts were expecting job growth of around 200,000, and the question is how much should it change our views about underlying labor market conditions? The answer is somewhat, but it's too soon to confirm a lasting downshift in job growth.

On the one hand, my patented smoother shows evidence of the downshift. The figure gets at underlying trends in monthly job growth by tracking 3, 6, and 12-month averages. Over the past 3 months, payrolls have averaged 167,000 per month. That's well below the 12-month average of about 230,000, suggesting a slowdown. 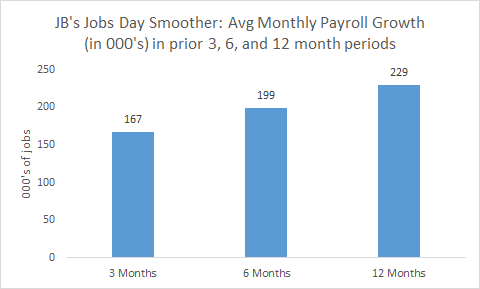 On the other hand, a look at the BLS figure of monthly gains (not averaged) shows peaks and valleys to be common in this data. Note the circled months at the end of 2014. Someone writing those months up might have mistakenly assumed a significant upshift in job growth. 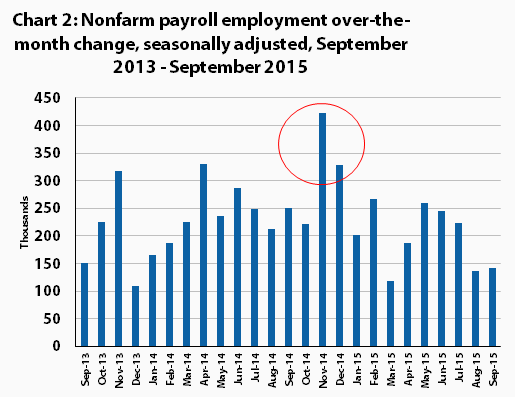 The key then is to ask: what other economic indicators might be in play here, slowing job growth in a way that could be lasting?

One candidate is the stronger dollar, which hurts the competitiveness of U.S. goods in foreign markets. We know that negative net exports have been a drag on growth lately, and one place you'd expect to see that in the jobs numbers is in manufacturing employment. In fact, this year, factory employment is flat, up only 2,000 per month, and down 27,000 in the past two months. Last year, the sector added 18,000 jobs/month on average. 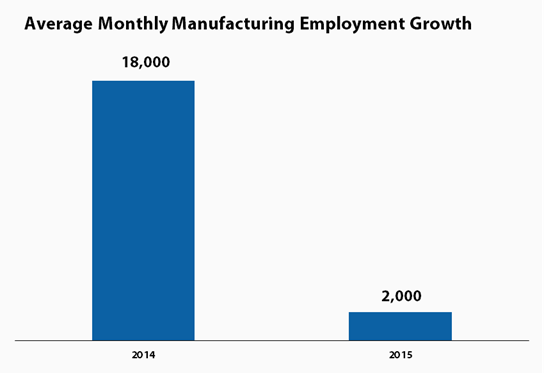 The decline in the labor force rate is another sign of weakness. It ticked down to 62.4 percent, the lowest this rate has been since the late 1970s. That's not as shocking as it sounds, because part of what's driving the rate down is demographics, i.e., the retirement of baby boomers. But we also have seen very low rates for working-age persons, and I'd say that at least a third of the 3.6 percentage point decline in the labor force rate since the end of 2007 -- the beginning of the recession -- is due to weak labor force demand. That's close to 2 million potential workers missing from the labor force.

However, a few signs point in a more positive direction. Wage growth hasn't sped up, which is what you'd expect if the labor market were truly around full employment, which it's not. But neither has it slowed. There's a significant lag in play here, but unlike price growth, at least wage growth is holding steady.

Also, both the number of long-term unemployed and the number of involuntary part-timers is on the decline, with the latter down 1 million over the past year. Since this latter group is a big part of the more comprehensive "U-6" rate, it fell to 10 percent last month, its lowest level since May of 2008.

Someone asked me the other day what would the Fed have to see in this jobs report to make their mind up one way or the other about a rate hike in either their October or December meeting? The answer is: no one report could have that effect. If the report was a large outlier -- a big negative or positive spike in payrolls, e.g. -- it would be considered... um... a large outlier. If it was somewhat off trend, like today's report, it would raise eyebrows, including my own, as a potential sign of a new, slower trend. If that suspicion is reinforced by the next two jobs reports, the Fed will very likely incorporate that into their evaluation at their December meeting and hold their target rate near zero.

The punchline is that "high-frequency" data is but a dot on a painting by Georges Seurat. It's not enough by itself to paint a picture of what's going on in the job market, but if you combine with a bunch of other dots, you may be onto something.

Unfortunately, this month's report is a lot less pretty than the painting below, and we'll have to wait and see if it truly paints an unattractive slowdown in the rate of job growth, something we really don't need given that the recovery still hasn't adequately shown up in wage and income growth of low- and middle-income households.

On the upside, perhaps we've engaged some art history majors in economic analysis!

Art history majors shouldn't feel left out on jobs day: high frequency data is like a dot in a Seurat painting. 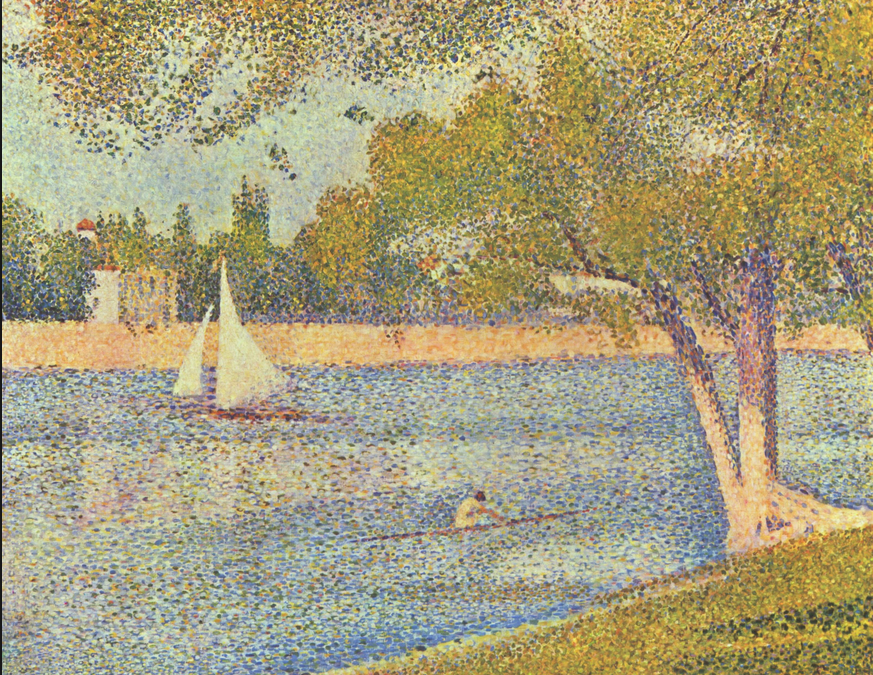