In one fell swoop, the world of genomics got a massive present: 45 new, fully sequenced bird genomes. This bonanza came in 2014 out of a four-year mega-sequencing project involving hundreds of researchers from more than 80 institutions across 20 countries. It represents just one tip of the huge tree of life.

The project was led by China's BGI, the world's largest genomics center. BGI has also led the sequencing of panda, rice and 38 different types of pigeon, which Darwin used as prime evidence for evolution in his 1859 masterpiece, "On the Origin of Species."

One of BGI's biggest findings was support for the "big bang" concept of bird evolution. The family tree built from these genomes shows that most bird lineages burst forth in a relatively short period of time (10-15 million years) after dinosaurs vanished from the Earth. Birds are "dinosaurs with wings," after all -- just look at a scaly foot of a chicken.

BGI's Avian Phylogenomics Project was huge: analysis of the data took more than 300 years of CPU (central processing units) time on several supercomputers. Yet it was just one small slice of global efforts to decode the DNA of life on Earth. Birds, some of our favorite vertebrate species -- there are more than 40 million birdwatchers in the U.S. alone, are just a tiny twig of the four-billion-year-old tree of life. 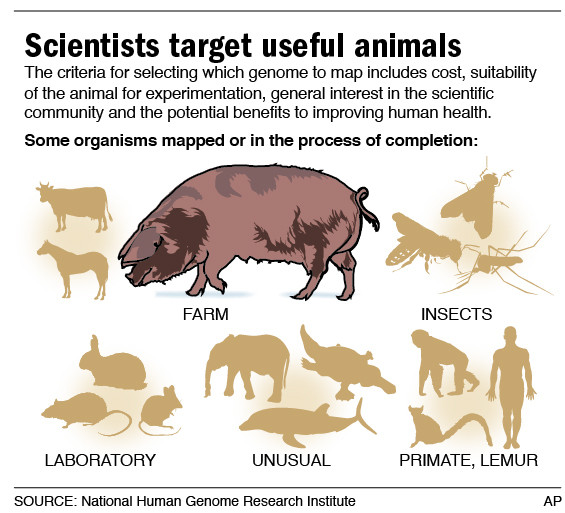 Graphic shows higher-order animals that have had or in the process of having, their genomes sequenced.

Genome 10K, for example, aims to sequence a representative genome from every animal type with a spine. It will take 10,000 genomes just to sample each highly related grouping of species, or "genus." G10K has inspired the Insect 5K and GIGA projects, which are mass-sequencing terrestrial insects and marine invertebrates. These are just three of the many mega-sequencing projects underway around the world.

President Obama recently announced the one million genomes project, built in part on the existing Million Veteran Program. Craig Venter is working on his first "million-ome." Jong Bhak, a leader of the Korean Personal Genome Project, has outlined a vision for a Billion Genomes Project. Harvard visionary George Church, founder of the Personal Genome Project, is calling for sequencing everyone.

We are sequencing the world -- from ourselves to all of the organisms upon which we depend as a living planet. We are decoding the planetary genome. What does this mean for the future? What are the risks and benefits?

In the future, our planetary genome might also include new life forms built in the lab. There is even talk of the possibility of a resurrected Neanderthal, carried by a surrogate human mother.

DNA is the foundational layer of life. It is the genetic material found in our cells. Each genome -- the complete set of the genes for any organism -- is the recipe that creates life.

DNA is exceedingly simple. Think of it like a language, but with only four letters -- A, C, G, T. The complex ways in which these letters can be combined gives rise to life. These four letters build words, sentences, paragraphs, chapters and books -- one for each living organism on Earth. It is a living code -- the "biocode."

Each genome is an autobiography. The letters and words explain traits like eye, hair and skin color, genetic health problems and myriad other traits. DNA can be a crystal ball -- like when it tells us whether a newborn has a genetic disease or not -- and it holds clues to our past. Our DNA is the DNA of our distant ancestors. In fact, we are almost 99 percent chimpanzee, human beings' nearest relative. If you look back through the four billion years of life, you'll find that 37 percent of our genes come from single-celled bacterial ancestors. 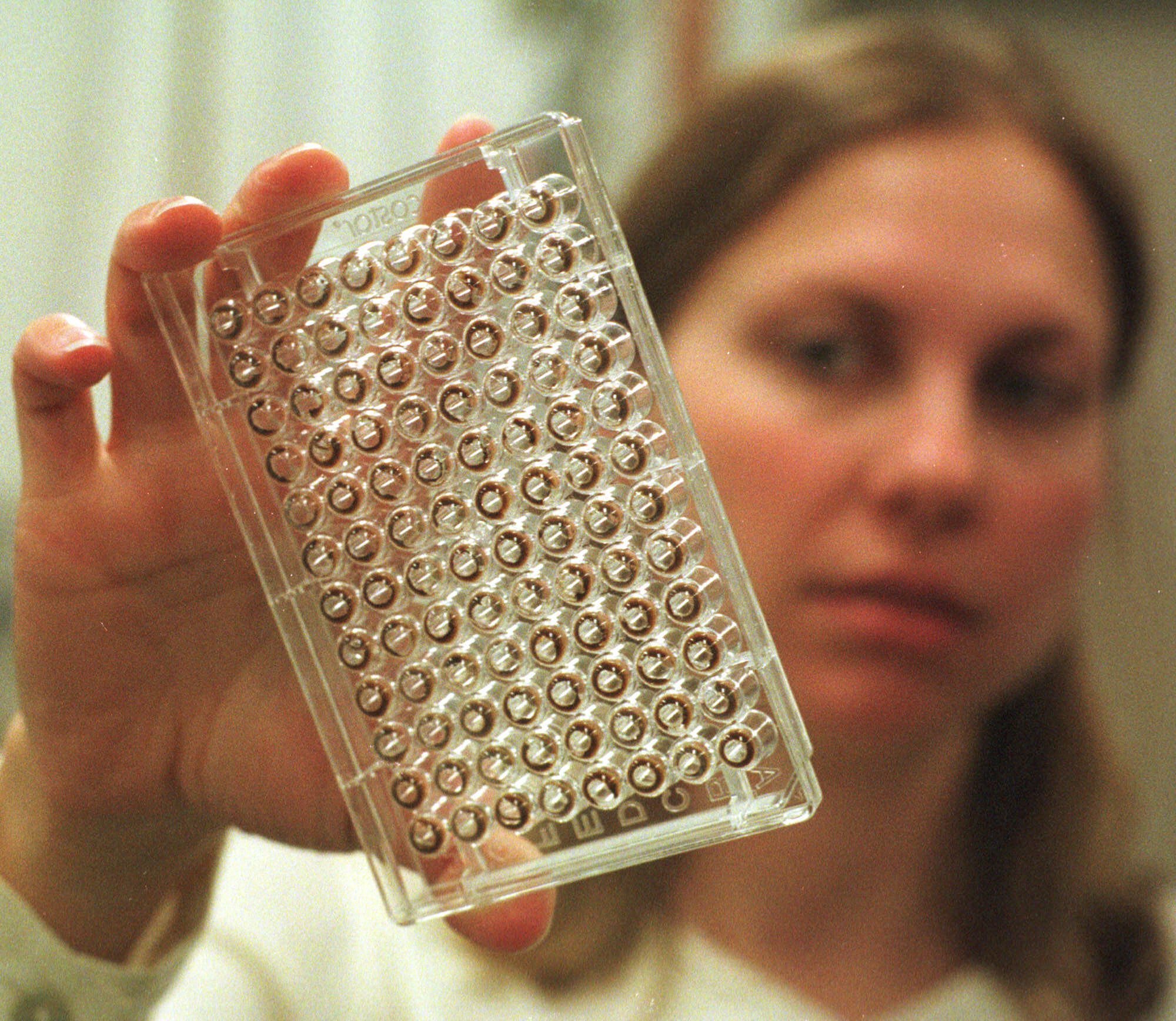 Nicole Barna, a senior operations coordinator at the Whitehead Institute in Cambridge, Mass., holds a tray of human DNA that is undergoing the sequencing process at the institute May 31, 2001.

Being able to read out our DNA opens the doors to a range of possibilities, but it also brings talk of privacy breaches, genetic discrimination, eugenics, designer babies, de-extinction and new life forms. It is already possible to recreate deadly viruses from the digital copies of their genomes. World leaders ranked synthetic biology threats as one of the top risks facing the world at the 2015 Davos summit.

DNA research is a field where what once seemed like science fiction is becoming reality. Heather Dewey-Hagborg, an artist, started picking up genetic trash on the streets of New York and using the analysis of a few genes, like those for eye color and gender, created faces she then 3D printed. Companies have sprung up to offer 3D mug shot services to police. Comb your hair in public and you could be leaving behind a DNA hologram of yourself.

This raises deep questions about the possibility of widespread genetic surveillance. To counter it, Dewey-Hagborg created a spray that cleans surfaces you touch and spreads fake DNA to keep your identity secret. While still art, her work cuts close to the bone.

We are building the capacity to sequence life on Earth at the same time that we are losing biological diversity.

We are also facing one of the biggest changes in the distribution and richness of global biodiversity this planet has ever seen. We are entering the sixth mass extinction. We are building the capacity to sequence life on Earth right at the same time that we are losing biological diversity. Because of over-consumption, habitat destruction, pollution and climate change, by the end of this century, the Earth will boast a severely impoverished planetary genome compared to the one during Darwin's time.

But it might also include new life forms built in the lab. There is even talk of the possibility of a resurrected Neanderthal, carried by a surrogate human mother. Science fiction? Not anymore.

Will you or your loved ones have your DNA read? DNA testing escaped the lab long ago. Curbside genetic testing is possible in major cities -- the "Who's Your Daddy" truck is destined to be the focus of a reality show. Ancestry checks and full genome sequencing are now available. For all kinds of animals, too -- cats, dogs, even yaks. The practical genomics revolution looms.

This raises deep questions about the possibility of widespread genetic surveillance.

Science is now working towards a $100 genome, and it might result in the accumulation of billions of genomes in the next decade. We can sequence more genomes than there are people on Earth. Why would we do that? Because many of us will need cancer genomes sequenced for diagnosis and to decide upon the best therapy.

Perhaps the most explosive findings are coming from the studies of microbes that live in and on us -- the human microbiome. Microbes are the invisible majority of life on Earth, and genomics is revealing their workings in keeping us and the planet healthy.

All of this data is coming together to give us a new vision of the planetary genome. We are biocoding the Earth.