With little hope for a grand bargain in Washington any time soon, many pundits have turned their attention to understanding who will receive more of the blame for the lack of a compromise. Traditional polls tend to force respondents to make a choice between whether they assign more blame to one side or the other. For example, a Bloomberg poll released in February asked respondents who they blamed more for the problems in Washington. In that poll, 34 percent said they blamed Obama and the Democrats more while 43 percent blamed Republicans.

But how much blame do Americans assign to either side? To get at this question, a new UMass Poll asked a similar question to that asked by the Bloomberg poll in February. However, because the survey was conducted online via YouGov, we were able to allow respondents to provide more nuance in how much blame they assigned to each side. Specifically, we provided respondents with a scale like the one pictured below, and they could pick a spot on the scale that related to how much blame they wanted to assign to one side or the other. Picking one of the extremes would indicate that they assigned all blame to that side, while picking a spot closer to the center meant that they distributed blame more evenly.

The charts that follow show how Americans distributed blame for the problems in Washington. Specifically, the charts show what percent of respondents chose each point on the 100 point scale. No matter whether respondents were asked to assign blame between Democrats or Republicans, the President or Congress, or Boehner or Obama, very few respondents assigned all of the blame to one side or the other. In the first pair, only about 5 percent of Americans place all the blame on either Democrats or Republicans; almost everyone gives at least some blame to both sides. In fact, nearly one-third of respondents placed themselves directly at the middle of the scale, assigning equal blame to both sides. And two-thirds of respondents chose a value in the middle half of the scale (between 25 and 75), indicating that they gave more blame to one side or the other, but by no means placed all the blame on either side. 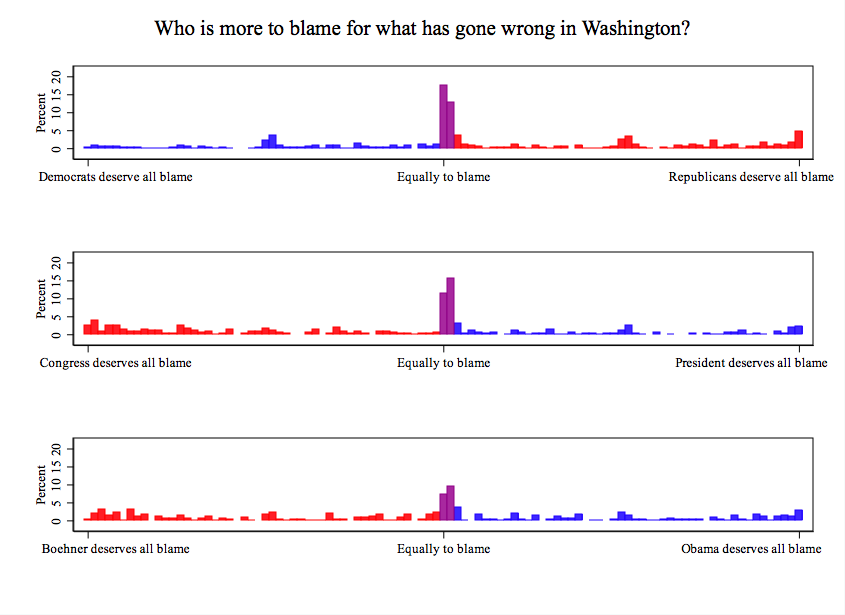 Of course, partisans might be expected to answer these questions in a predictable way by blaming the other party for the problems in Washington. But even most of the partisan respondents in our sample took a non-absolutist view when it came to assigning blame. About one-in-ten Democrats placed all of the blame on Republicans; however, a large share of Democrats placed equal blame on both parties and most of the rest gave some, but not all, blame to the Republicans. Even fewer Republicans placed all of the blame on Democrats and, in fact, one-in-ten Republicans placed more blame on the Republican Party than they did on the Democratic Party.

So who is to blame for the problems in Washington? Our unique approach to answering this question reveals that most Americans think both sides share at least some of the blame. Indeed, it is remarkable that very few American adults assign total blame to either side, even when it comes to the partisans in our sample. The fact that Americans are taking a more nuanced and balanced view toward assigning blame may suggest that a prolonged showdown is a risky proposition for both sides. Indeed, it seems that neither party will be successful in placing all of the blame on the other side any time soon.