Sequestration could cost thousands of teachers their jobs, according to a grim report the White House released Sunday. That's just one possible impact of the $85 billion in automatic spending cuts set to kick in Friday unless Congress reaches an increasingly unlikely deficit reduction deal that includes added tax revenue.

Last week, Education Secretary Arne Duncan warned that the looming cuts to schools are "very, very worrying" and that there is nothing he can do to prevent teachers from losing their jobs should sequestration take effect.

"This is real people going away," he said. "I have no ability to mitigate this and say it's going to be okay. I'd be lying if I said that."

Sunday on "Face the Nation" Duncan said that some teachers are already receiving pink slips as schools start to figure sequester cuts into their fall budgets.

Special education programs, low-income student aid programs and Head Start pre-school could also lose some of their federal aid. Department of Defense schools and schools on Native American reservations could be hit hard because they depend on federal funding more than most school districts.

In the map below, see what sequestration could mean for teachers in your state. Larger states stand to lose the most teachers. In California, the White House warns that 1,210 teacher and teacher aides jobs are at risk, and 187,000 fewer students could be served. 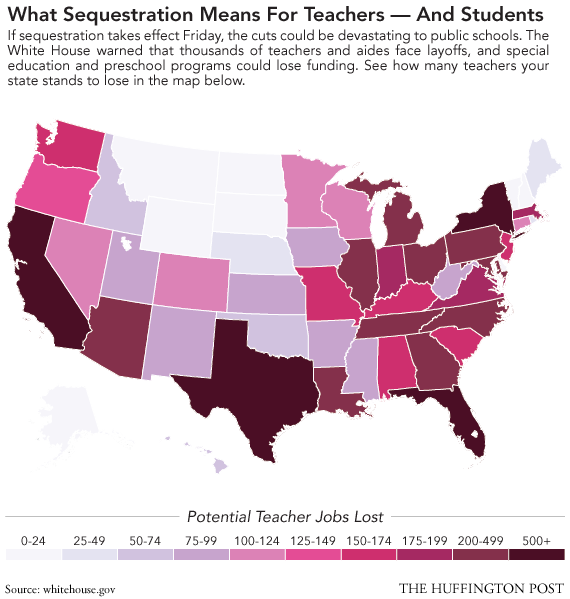 Sequestration 2013: How Many Teachers Could Your State Lose? (MAP)
They Don't Care About Sequestration