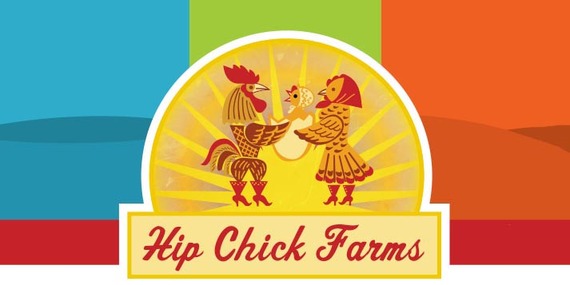 This week I talked with entrepreneur Serafina Palandech, Co-Founder of Hip Chick Farms a California based LGBT owned organic, frozen poultry product company providing easy meal solutions for busy families. Hip Chick Farms was recently featured on the Food Network's "Food Fortunes" where they joined food savvy entrepreneurs from across the nation to seek startup funding. The startup company was founded by Serafina Palandech and her wife Jennifer Johnson a former sous chef at Chez Panisse under Alice Waters who was credited with starting the global sustainable foods movement. For the last 14 years Jen has served as the Executive Chef for Ann and Gordon Getty in San Francisco. Hip Chick Farms makes healthy gourmet, artisan frozen products that provide time-crunched families delicious and easy food solutions. All of their products are made with whole natural foods and they never use any artificial ingredients in their products. At present they have four free-range chicken products including gluten-free chicken nuggets, chicken meatballs, gluten-free chicken wings and organic chicken fingers. They recently developed a partnership with Whole Foods and will be expanding their product line as well as increasing availability in other supermarket venues nationwide. We talked to Serafina about she would like to accomplish with Hip Chicks Farms and her spin on our LGBT issues.

Now that marriage equality is in the hands of the U.S. Supreme Court we asked what she would like to see happen for LGBT equality in the next few years. Palandech stated:

Jen and I spoke about this at length and we both share that marriage equality is incredibly important and that we're happy to see it progressing the way that it is but we also believe that trans issues and equal equality for trans folk are incredibly important within the LGBTQ community. We need to shift our focus there and more of our energy to ensuring access to education, access to jobs, safety and equality under the law for trans people. Secondly, I would say that women's equality within the LGBTQ movement sometimes does not get as promoted. So equality, equal pay for women is a very important issue to us as well.

Serafina, Jen and daughter Ruby Rose live on their farm the Ramblin' Rose in Sebastopol, California. They believe in the value of family and together building a business that helps their local economy, farmers and suppliers.
For More Info: hipchickfarms.com