SPOILER ALERT: This story reveals details from as recent as episode 9 of "Serial."

A Maryland Best Buy has become a destination for people seeking a fairly obsolete piece of technology: a pay phone.

They're looking for one pay phone in particular, the one that plays a key role in the wildly popular podcast "Serial," which chronicles a reporter's investigation into the 1999 murder of Baltimore-area teenager Hae Min Lee.

Adnan Syed, the victim's ex-boyfriend who is serving a life sentence after being convicted of first-degree murder in Lee's death, claims he didn't do it. As avid fans of the show (like this writer) know, the state's case against Syed relies heavily on a pay phone that was once allegedly at a Best Buy on Security Boulevard in Windsor Mill, Maryland, outside of Baltimore.

The state's star witness -- referred to on the podcast only by his first name, Jay -- claimed Syed used the phone to call him to ask for a ride, shortly after allegedly murdering Lee in the Best Buy parking lot.

The problem is, it's possible the pay phone never existed. Sarah Koenig, the host of "Serial," hasn't found conclusive evidence confirming that there was a pay phone in the Best Buy parking lot at the time of the murder.

Now fans are apparently coming to the store location to see for themselves, Jeff Shelman, a Best Buy spokesman, told The Huffington Post. So many people have inquired about the phone that the general manager of the store, who hadn't heard of "Serial" until people started coming in to ask about it, has started listening, Shelman said.

The top review on a Yelp page for the Best Buy location is simply a reference to the show: "Parking lot is secluded enough, but I couldn't find the pay phone." A recent post on Reddit called "There WAS a pay phone at Best Buy" has generated 344 comments.

In the show's ninth episode, a friend of Syed and Jay's tells Koenig that there was never a pay phone at the Best Buy. She says she's certain of this because she used to shoplift from the store and was thus hyperaware of her surroundings. Koenig says of the pay phone, "We did a lot of research on this, where it was, whether it was, and we could not account for this phone booth."

Neither can Baltimore native Robert Hunt, who, inspired by the Reddit post, went to the Best Buy on one of the busiest shopping days of the year to look for evidence.

"It always occurred to me that there would be, at least in 1999, pay phones at a store like that," said Hunt, who has listened to each episode of the show several times. "It certainly made a difference to me, and I felt compelled even on Black Friday to go out there and check it out." 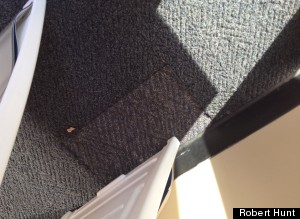 The patch of carpet Hunt found at the Maryland Best Buy.

Standing in the middle of a "stampede," Hunt said he found a patch of carpet in the vestibule of the store that looks as if it's covering up a stand or a pedestal. On the wall nearby is an area where it appears something was attached to the wall. All of this he takes as evidence that there was once a pay phone at Best Buy, though not in the parking lot, where the state's star witness, Jay, claims it was. 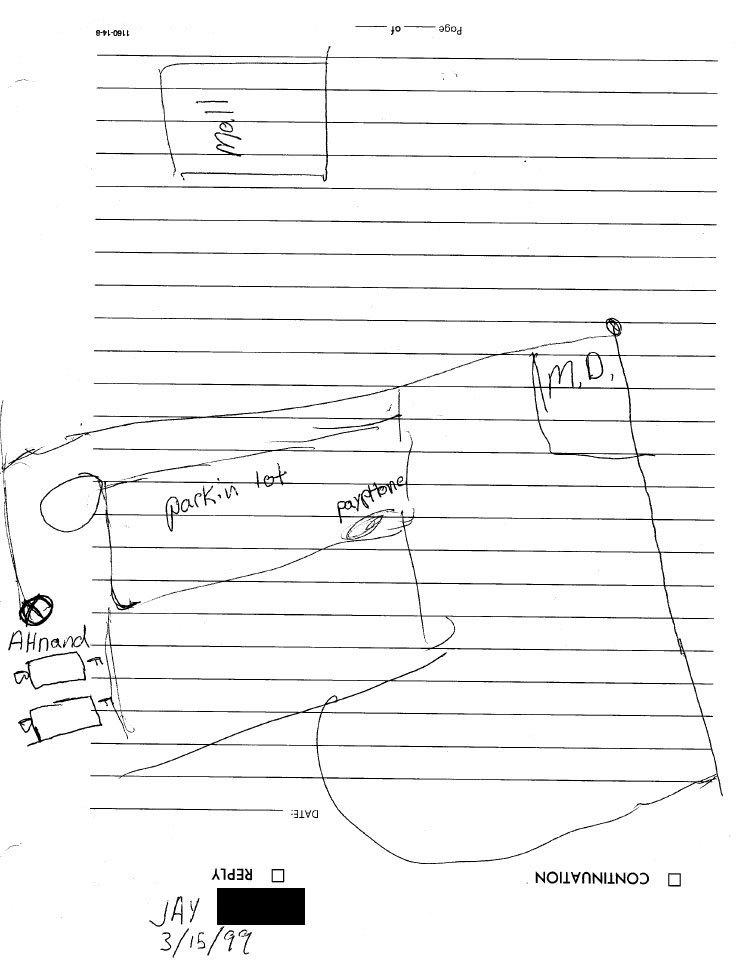 Jay's map of Best Buy and its surroundings. According to the "Serial" website, the rectangle to the right of the word "Ahnand" is the Best Buy store and the pay phone is in the corner of the parking lot right outside the store. 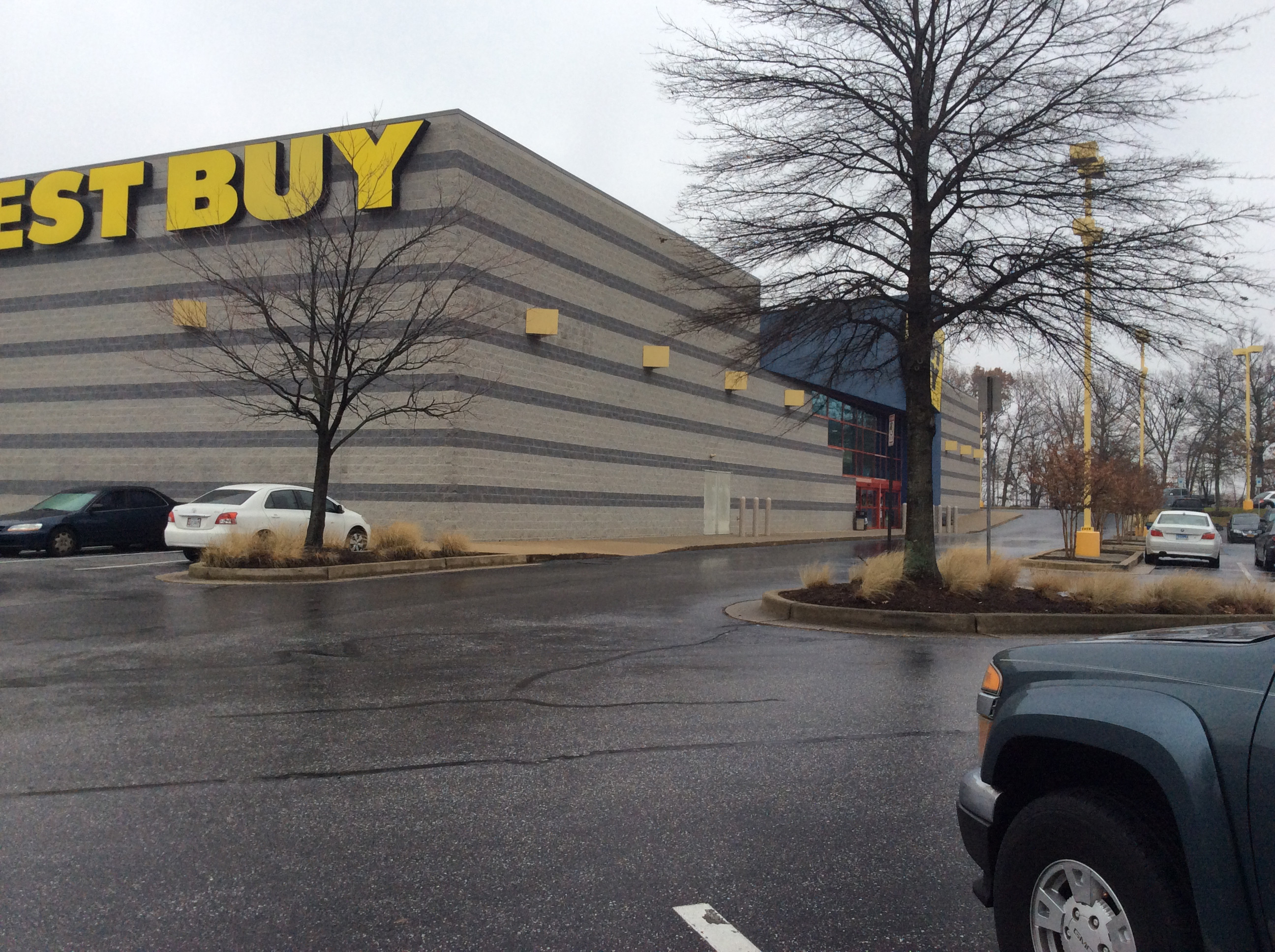 Hunt's photo of the pay phone's location, according to Jay's map. Hunt says the McDonald's (marked as "M.D." on Jay's map) is behind him. "It is about 30 to 35 yards from the front door. It does not seem like a logical place to have pay phones. I could not see any evidence or residual proof that there were ever pay phones at that spot," Hunt wrote in an email.

The area of the parking lot where Jay claims the murder took place was quiet, even on Black Friday, which fits Jay's description, Hunt said. Still, he wasn't necessarily convinced it was the scene of a murder.

"It would have been a good place to go and smoke weed or fool around. I can't see murdering anybody there," he said. "But I've never murdered anybody." 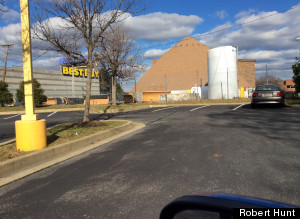 It's hard to tell whether the Best Buy brand in general has gotten any lift from "Serial," according to Shelman. Listeners are certainly hearing the name more, given how frequently it is mentioned on the show. The first sentence listeners hear in the recap before episode 10 centers on the pay phone at Best Buy, for example. And that is a lot of listeners: "Serial" has been downloaded and streamed more than 5 million times, setting a record for the speed with which it hit that mark.

Twitter users have even joked that the entire show is an ad for Best Buy.

The chain could use the help, especially during the holiday shopping season, which is crucial for retailers. The company's most recent earnings report was encouraging, but Best Buy has struggled in recent years as shoppers increasingly buy electronics online.

Even though the show links the Best Buy parking lot to a grisly crime, it may actually boost sales by bringing more fans to the store, said Jeff Greenfield, the co-founder of media analytics firm C3 Metrics.

"Any mention of them, especially this time of year, is going to be to their advantage," Greenfield said.