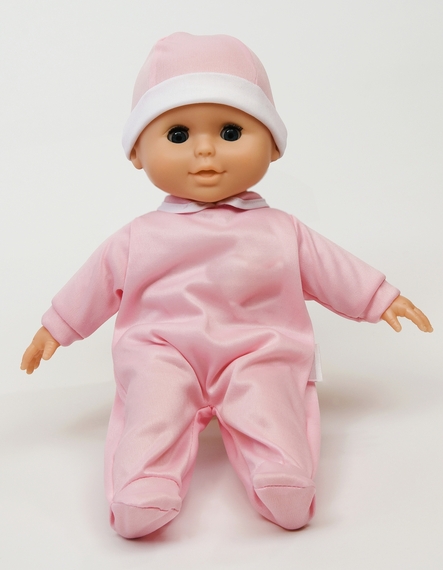 This is a fake baby.

Riveted to the screen, I am awestruck by this suspenseful, humanized version of what war does to people when suddenly, my 'out-of-body' cinema experience is jolted back to reality. The scene takes place at home in Texas when Chris Kyle, played by Bradley Cooper, returns from his first tour of duty in Iraq. Sienna Miller, who plays his wife, passes him their newborn son. Cooper holds the baby awkwardly. I look around to see if anyone else is noticing anything peculiar. One woman poked her husband. Someone else pointed at the screen whispering. A man, who was chewing loudly on popcorn, had suddenly stopped. I heard a giggle from a few rows back.


How could this be? "American Sniper" is nominated for six Oscars, including "Best Picture." The film has already won a laundry list of awards from groups like the Broadcast Film Critics Association and the Directors Guild of America. Not only that, wasn't the movie overseen by Clint Eastwood, one of our finest living directors? How such a prop malfunction was made, by such industry geniuses was troubling.

I clung to my "Hooray for Hollywood" optimism. Maybe the little tyke was under the weather. Or just nervous.

When I got home, I checked the Twitterverse and Google. The baby was indeed a fake and I was disillusioned beyond belief. After all, the movie had a healthy budget and all the elements of a blockbuster: suspense, tension, incredible acting, a believable story, sex (tastefully done), violence and it was thought provoking. But the film haunted my mind afterwards for the wrong reason. I tried to focus on the hell that war is and its effects on the family. I tried to understand how a person would be driven to serve four tours of duty in a seemingly endless war. I tried to imagine why a red-blooded American male wouldn't want to stay home and play house with Sienna Miller. But I just couldn't get past the fake baby. How could this happen, Clint? I understand actors are only human and that unavoidable things happen during filming. (I read the baby was out sick.) But couldn't the prop master have taken a walk and found someone wheeling a baby carriage? A trip to the park, fast food joint or the nearest Target would have surely turned up a baby or two. Problem solved. Maybe the production staff didn't think anyone would want to loan their precious offspring, but cooperation surely would have been easy as pie. After all, who wouldn't want their kid to be in a big time movie? Imagine the social media posts from the star struck (and lucky!) parents. That baby would be famous before it spoke its first words.

And then something amazing happened. The baby was interviewed by journalism royalty, the king of serious media, Charlie Rose. When Charlie interviews somebody, they're really important. Not only that, they're really, really real. So my sincere apologies go out to Mr. Eastwood, Mr. Cooper, the prop master at Warner Brothers Studios and anyone else I may have offended. For you non-believers, here's Charlie's discussion with the "Sniper" baby (note: interview does not air in its entirety.)