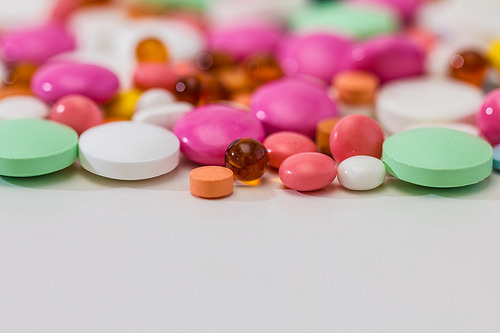 Advertisements for many common prescription drugs include frightening warnings about serious possible side effects, such as death. But in the ads on TV, the talk of serious side effects is speeded up so fast that it sounds like jibberish and the attractive woman in the ad, who is so deliriously happy to be free of her rash, is staring seductively into the camera, distracting you.

So no one is really paying any attention to the man who is droning on and on about bad stuff that could happen to you if you take the drug. Clearly the pretty woman isn't concerned about her chances of dying from this drug because she is just an actress and doesn't have the rash or take those pills despite the fact that she's getting paid to pretend that she is. No wonder she's carefree, playing with the puppies in a field of wildflowers.

Without naming names, these are some of the most hilarious drug warnings I have culled from my obsession with actually listening to, and reading, the warnings:

A prescription drug used to improve the look of frown lines between the eyebrows in adults younger than 65 years of age includes warnings that discuss serious side effects that can be life threatening. These warnings include this helpful advice: "Call your doctor right away if you have problems swallowing, speaking or breathing." The lawyers were yucking it up when they drafted that one because anyone who can't breathe or speak can't really make that call in a way that anyone can understand them so basically it just gives the dying person something to do until they enter the afterlife.

Another ad for a drug used to treat severe chronic plaque psoriasis in adults and children shows a "before" picture of the back of a young, attractive woman who has a red blotchy rash all over her back and arms and the "after" picture shows the same woman's back and arms without the rash. The warnings inform you that serious side effects range from infections such as Hepatitis B to heart failure. But if you actually slog through all of the warnings you will learn that some people using this drug developed new psoriasis or experienced a worsening of the psoriasis they already had. Really. So if you take this drug to alleviate your psoriasis you could actually make your psoriasis a lot worse and get more of it. Who knew?

This last example is my favorite because anyone can use it as an excuse for their bad behavior. A prescription medicine to help you fall asleep admits in the Serious Side Effects section of its ad that if you take this sleep aid, you may walk, eat, drive or engage in "other activities" while asleep without remembering it the next day. Too damned funny. This is the best "hall pass" you'll ever get in life.

And don't even think of filing suit against the drug company after your significant other discovers your dalliance across town last night that you "don't remember." They warned you in advance.