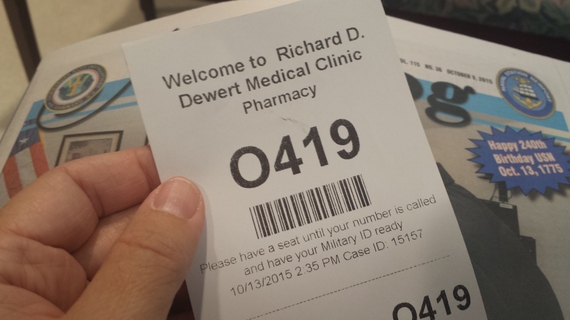 I grabbed a copy of the base newspaper, The Navalog, from the rack inside the revolving door, and took a seat with all the others in the waiting area. I searched the pages for something to distract me from my tendency to people-watch.

I recognized my base neighbor in a photograph and pulled the paper closer to my eyes. "Subway opens at NEX" one headline read, and my mouth watered thinking of my favorite tuna on wheat. There was a blurb about a foreign policy lecture at the War College, and I made a mental note to tell my husband about it.

After a swish of the revolving door, I heard heated banter, prompting me to peek over the classified ads.

"Now you sit down right there!" a tiny old woman with bushy salt-and-pepper hair and a shirt embroidered with teddy bears barked at her companion, while pointing to a row of chairs. The companion was an even older woman -- a friend? a sister? a neighbor? -- with short wispy white hair, thick glasses and a quad cane.

The companion hobbled over to the chairs and sat begrudgingly, muttering something about not needing any help. The two argued about where to put their pocket books, until one blurted, "Knowing me, I'll forget where it is. I can't even remember where I parked the car!" and they both laughed.

Clearly, their hostile banter was just a shtick. These two were good friends, most likely retired military friends or military spouses, helping each other in the pharmacy.

As I watched them, I wondered what their lives had entailed. They looked to be in their late 70s or 80s, both wearing the elastic-waisted polyester pants that are advertised in the back of Parade Magazine. How long were they in the military? What had they lived through?

I wasn't the only one watching the feisty old retirees' comedy act. A man in uniform waiting nearby stepped toward them and said, "I got you a number from the kiosk over there. You need one to pick up a prescription. It's a new system, but I can help you."

The white-haired woman grumbled and snatched the ticket from the serviceman's hand, having no intention of learning the new-fangled system. Her salt-and-pepper friend thanked the man kindly, before scolding her companion for being rude.

Others standing by peeked over to see the number on the women's ticket -- O-421 -- so they could help when the time came. Everyone seemed to understand that these women had earned their place in the line, and in life.

There was no need for the women to abide by the new pharmacy system or tone down their cantankerous banter. Somehow, the rest of us in the waiting room knew they were to be respected and taken care of, and it was our duty to do it.

We watched with genuine reverence, knowing that someday, we'll be the retirees in the military clinic pharmacy waiting rooms needing help. We'll be the ones wearing wrap-around sunglasses, pushing shopping carts through the commissaries, bickering over coupons and deli meats. We'll be the ones telling old stories of proud moments, of sacrifices, of military friends lost and gained along the way.

Without a spoken word between us, we made a collective pact to help the two retired women that day.

It took 37 minutes for my number to be called, but I was grateful for the opportunity to observe the military folks around me. Whether we know each other personally or not, we are one people, one community, one family. We share experiences and a sense of respect for our unique lifestyle.

And we take care of each other.

This Veterans' Day, open your eyes to fellow military members in your community. Share stories, show respect, and lend a helping hand.