Sing of good things you didn't know, not bad. Sing of happy, not sad.

In its almost 45-year history, "Sesame Street" has won 159 Emmys, multiple Grammys and, as of 2009, as many as 77 million adult Americans had watched the show as children. Over three dozen countries have a version and many more air the dubbed American show. In short, millions of people the world over have discovered how to get to Sesame Street.

In celebration of its many milestones, here are a few (The Count would say there are eight) little known facts from "Sesame Street":

It's understandable that characters have gone through updates since the show's inception. That written, a few of these updates have been considerably radical. A few examples:

In some versions of vampire folklore, a way to ward off the attacker is to throw "rice, millet, wheat or red lentils," as the bloodsucker will need to count the grains before moving on. In Europe, people would place "poppy seeds, millet or sand" at the graves of suspected vampires as a pre-emptive defense.

But is the Count even a vampire?

The puppet was originally modeled off Bela Lugosi's Count Dracula, and he certainly appears to be a vampire (the fangs, the cape, the creepy castle and the bats all certainly point to vampirism). But "Sesame Street" canon is actually divided on the subject. According to the "Muppet" fan wiki, in some accounts the character has been described as a "number-friendly vampire" and a "Numerical Vampire," but in at least one instance it was insisted: "The Count is not a vampire."

The Huffington Post contacted "Sesame Street" PR who pointed out that Count is "not named specifically as a vampire" in his bio. Perhaps it isn't possible to shed more light on this mystery as vampires hate that.

In the original pilot, the scenes between human and muppet characters were separated, as child psychologists worried that mixing fantasy and reality would mislead children. The muppets that dominated the show were Bert and Ernie, the only characters that tested well during screenings. As soon as the program would cut away to just humans, children's attention levels plummeted.

It is rumored that a decision was almost made to cut everything but Bert and Ernie and have the show focus around them. These testings led to the creation of Big Bird, Oscar the Grouch and Snuffleupagus, according to Edward Palmer, one of the founders of "Sesame Street." 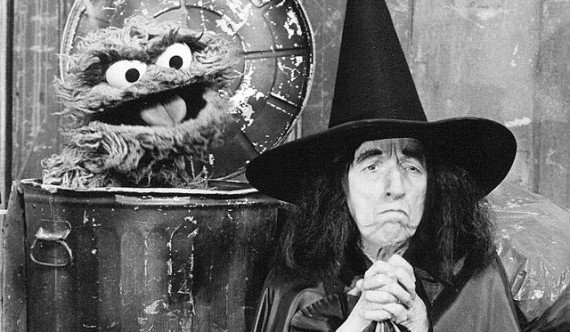 The trashcan dweller may be known for usually just loving "crummy weather," but he has actually fallen in love. In a now banned episode that was deemed too scary for children, the Wicked Witch of the West made an appearance on "Sesame Street" and was crushed on by Oscar. Unfortunately, the relationship didn't take off.

For what it's worth, Oscar did also fall in love with a new, trashy neighbor named Germaine the Grouch in a short children's book. The green grouch struggles to woo the pink grouch when he tries to flirt, and therefore isn't grouchy. When he loses his temper in frustration, his true grouchiness comes out though and the two have a disgusting picnic together. True love!

Until 1985, the adults on "Sesame Street" believed Snuffy wasn't real. Whenever Big Bird would try to introduce the character, the adults would just miss meeting him (Snuffleupagus would walk out of the scene before their arrival, the adults wouldn't turn their heads in time or other similar gags). Besides Big Bird, only a few other muppets, kids and guest celebrities (such as Judy Collins) could see Mr. Snuffleupagus.

The character was finally introduced to adults in Episode 2,096. According to the "Muppet" fan wiki, Martin P. Robinson, the person who played Snuffleupagus, said in the documentary "Sesame Street Unpaved" that the introduction was due to high-profile cases of pedophilia, which convinced writers that children shouldn't be afraid adults won't believe them. Dulcy Singer, the show's executive producer, said at the time, "We didn't want to do anything to discourage children from going to their parents."

Also, on a much less serious note, did you know that Mr. Snuffleupagus' first name is Aloysius?

"Talk, Listen, Connect" is a special installment of videos for military children that helps explain both long absences and the possibility of parents returning with injuries or even not returning at all. According to a U.S. Army sergeant quoted on the Sesame Workshop site:

We had a triple amputee come in recently who had not seen his 3-year-old daughter since his injury and was afraid of how she would react ... I gave him the 'Talk, Listen, Connect' outreach kit and explained the materials to him. He was so happy he started to cry with joy.

The materials are free and available online.

Similar kits also exist to help children with an incarcerated parent, as well as many other potentially devastating scenarios such as hurricanes or familial financial struggles.

Elmo didn't officially debut until Season 12, although the muppet had already been used as a random extra in scenes for quite some time. Initially this "new" character only communicated with "sounds rather than words."

Apparently, one of the early voices of the character, Richard Hunt, tried to perform Elmo with a gruff, caveman voice, but eventually abandoned the concept. According to legend, he tossed Elmo around, only to have Kevin Clash pick up the muppet and create the beloved character.

The red 3-year-old ended up becoming the only puppet or non-human to testify before Congress in 2002, advocating for increased funding for music programs.

According to Sesame Workshop, a show writer named Virginia Schone proposed the word "Sesame." Its use in an "Arabian Nights" tale, she said, made it feel like it was loaded with a sense of adventure. The show was already set on an urban street, so "Sesame Street" just clicked.

Producer Jon Stone claimed “the name was set at the 11th hour and 59th minute.” Apparently, names such as "1-2-3 Avenue B" and "Fun Street" were also considered. The former was ultimately rejected as it would appeal less to children outside of New York City.

Everyone on the staff initially disliked the name, fearing children would have a hard time pronouncing it, but obviously those worries ended up being put to rest.

That was a hoax! In 2005, Cookie Monster did start to focus slightly on eating right -- he can be seen eating fruits and vegetables occasionally -- but the character still devours cookies like nobody else. Cookie Monster went on "Today" in 2006 and explained his new diet to Matt Lauer:

The misconception is partly credited to a new song entitled "A Cookie is a Sometimes Food," although Hoots the Owl actually sings the song to Cookie Monster, and at the end Cookie Monster declares: "NOW is sometimes!"