For more than 40 years, the plush-covered denizens of Sesame Street have educated and entertained children. Oscar the Grouch has complained, Bert and Ernie have sung, and Elmo has laughed.

There have been a lot of memories made, and most of those centered on the block's famous building-123 Sesame Street. While the two-story apartment building might not be as unique as Oscar's trash can or Big Bird's nest, it's arguably the main focal point of the show.

If you're like the Movoto Real Estate team, you've at least wondered what it would be like to live in the brightly colored neighborhood. Instead of sitting around wondering, we decided put our Sesame Street knowledge to use and figured it out.

The practical answer to this fanciful question is that 123 Sesame Street is worth $614,460. Of course, being an apartment building, you also have the option to rent.

How Did We Do It?

Typically, we search out novelty real estate and add a price tag to the imaginary home. 123 Sesame Street fits that category. However, it also doesn't. We've priced Barbie's dream house, Wayne Manor, Monopoly properties, and the Clue estate. What we haven't done is price an apartment building.

This doesn't mean it can't be done, just that the process is slightly different. Just like an educational episode of the children's show, we'll explain.

There were two major hurdles to overcome: Finding a location; and determining the rent for each apartment.

Can You Tell Me How to Get to Sesame Street? Yes We Can. 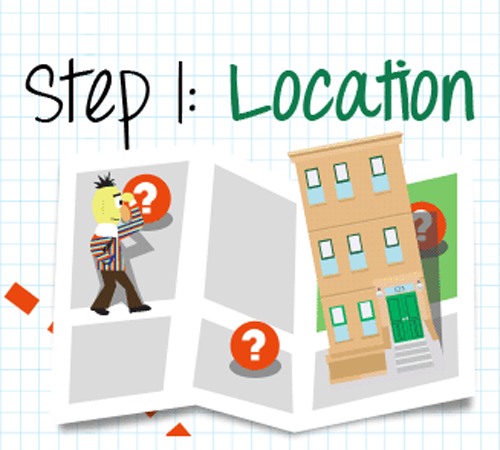 123 Sesame Street is a two-story apartment building in New York City. Its exact location is up for debate, but according to the Sesame Street interactive map:

"You get there by going to Times Square, Manhattan, or anywhere you can pick up the local R train. Then hop on the subway and head east to Queens."

If you don't want to go this route there are a host of other options for the near-mythical street.

-- In the 35th anniversary special, resident baby monster Elmo sent a package to Oscar that contained the 10128 zip code, otherwise known as the Upper East Side.

-- In honor of the show's 40th anniversary, New York renamed the corner of 64th and Broadway to 123 Sesame Street.

-- In Christmas Eve on Sesame Street, the main characters can be seen getting off on the 86th St. subway stop.

All of these are good choices, but when it came time to make a decision, we sided with the Sesame Street interactive map and picked Queens. After all, they almost literally spelled it out for us.

After we picked Queens, we needed to figure out the cost of renting in the area. Here we turned to hotpads.com. According to the website these are the median costs of renting in Queens:

After we cried over our own hefty rent, we figured out the number of apartments housed inside the building. Like everyone's favorite vampire (no, it's not a Cullen) we counted how many people lived in 123 Sesame Street. This came to five bedrooms and three baths (ah, ah, ah) spread out among three apartments.

BFFs Bert and Ernie live on the basement of 123 Sesame Street. The duo's apartment contains a kitchen, bath, living room, and one bedroom with two single beds.

The remaining floors are home to none plush people. The first floor is home to Gordon and Susan Robinson and their adopted son, Miles. The top floor of the apartment building is home to Luis and Maria Rodriguez and their daughter Gabi.

We assumed that each floor had two bedrooms, a room for both parents and the children, along with a living room, kitchen, and full bath.

Once we knew the number of beds and baths, it was relatively easy to put the numbers together and come up with the $614,460 price tag. To do this we calculated the rent, or potential rent, of everyone and "everymuppet" involved. This came to $62,700. We then assumed a gross rent multiplier of 9.8.

From there it was multiplication. And as we all know Sesame Street loves math.

Of course, that's not all we figured out.

The seemingly unemployed, though always entertaining, Bert and Ernie would pay $18,300 a year in rent. If the duo would need to earn three times the rent, a reasonable requirement by most landlords, together they would need to make at least $54,900 a year.

In our minds, that's more than worth the the memories.

How We Valued Sesame Street