Democrats got a boost of good news yesterday in a batch of new tracking polls that show previously written-off Senate candidates in Pennsylvania, Colorado and Wisconsin running significantly closer to their Republican opponents. New polls yesterday also confirmed close margins in critical battlegrounds like Washington and West Virginia, but a Democratic comeback in either Pennsylvania, Colorado or Wisconsin would all but end Republican hopes to gain a majority in the U.S. Senate.

In Pennsylvania, two new surveys from the Muhlenberg College/Morning Call and from Democratic pollsters Public Policy Polling (PPP) confirm the significant tightening in the race first indicated by a set of internal Democratic party polls released last week. The PPP poll shows Democrat Joe Sestak edging Republican Pat Toomey's by a single percentage point (46% to 45%), while the smaller sample Muhlenberg tracking poll shows Sestak with a three-point advantage (44% to 41%). That result represents a ten-point net shift from Muhlenberg's last poll in early October. On the other hand, a Rasmussen poll conducted last week still showed Toomey leading by 10 points (49% to 39%).

Our standard trend estimate, which takes all of these surveys into account, now shows Toomey leading by less than four points (46.1% to 42.6%), just a whisker from toss-up status. Our more sensitive trend estimate, which puts greater weight on the four most recent polls, shows Sestak ahead by a toss-up 1.8 point margin (44.6% to 42.8%). 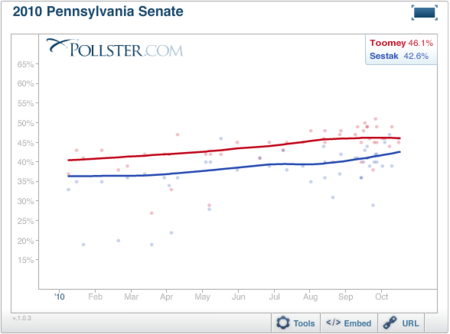 The new polls narrow Buck's lead on our Colorado trend estimate to just 3.2 points (47.9% to 44.7%), enough to move Colorado into toss-up status. Our more sensitive trend estimate (shown below) reduces Buck's margin to less than two points (46.9% to 45.2%). 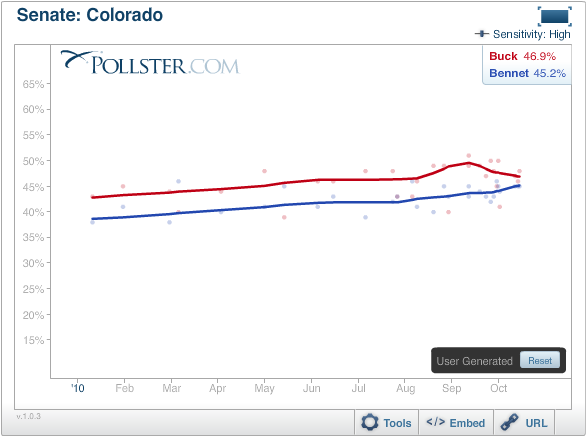 In Wisconsin, a survey of 402 likely voters conducted by St. Norbert College for Wisconsin Public Radio finds Republican Ron Johnson just two points ahead of Democratic Senator Russ Feingold (49% to 47%). That result is similar to internal tracking poll results released by the Democratic Senatorial Campaign Committee (DSCC) over the past two weeks, but is narrower than three polls from CNN/Time, Reuters/Ipsos and Rasmussen conducted early last week.

Our Wisconsin trend estimate continues to give Johnson a 6.2 point lead (50.8% to 44.6%), roughly three points narrower than in early October.

In Washington, a new PPP automated survey released yesterday gives Democratic Senator Patty Murray a two-point advantage (49% to 47%) over Republican challenger Dino Rossi. Meanwhile, a live-interviewer Marist/McClatchy News survey out just this morning gives Murray a one point edge (49% to 48%). Those margins are well within sampling error of the two automated polls conducted in the last week by Rasmussen and SurveyUSA, but closer than on two live-interviewer polls conducted a few days earlier by the University of Washington, CNN/Time and the Elway Poll. All six surveys show Murray leading, but an internal poll conducted last week by Moore Information for the Republican Senatorial Campaign Committee (RSCC) shows Rossi with one-point edge.

Correction: The original version of this article incorrectly reported that Joe Sestak was a percentage point behind on the PPP Pennsylvania survey was rather than a point ahead.