After the U.S. Supreme Court sided with a Christian baker who refused to make a wedding cake for a gay couple on religious grounds, writer-actor Seth MacFarlane criticized that ruling as nearsighted.

The 7-2 decision, released Monday, faulted the Colorado Civil Rights Commission for showing “impermissible hostility” to the baker’s religion, thus violating his rights under the First Amendment.

“It’s a shorter walk than we think, particularly today, from ‘I won’t bake them a cake because they’re gay’ to ‘I won’t seat him here because he’s black,’” wrote MacFarlane.

MacFarlane went on to say “those who balk at that comparison” should remember that “religion was deployed to justify far worse treatment not so very long ago” ― a likely reference to the Holocaust in which Jewish people were persecuted and murdered en masse for their faith.

Those who balk at that comparison include the Supreme Court majority, who criticized one member of the Colorado Civil Rights Commission for drawing a link between the Holocaust and the baker’s refusal to make a cake.

A solid Supreme Court consensus that declining to bake a cake for a same-sex wedding is not, in fact, comparable to the Holocaust pic.twitter.com/4VN9sn6oHB

Another tweeter challenged MacFarlane, asking if he’d make a cake for a Trump follower. MacFarlane said he would, noting that he signs pictures and does sketches for both Trump supporters and opponents “all the time.”

Ask the supreme Court. 7-2 decisions. Would you like to be forced to make a cake for a Trump follower?

The relevance of the comparison is dubious, but yes, I do sketches and sign pictures for both Trump supporters and Trump opponents all the time. You do it for one, you do it for the other. https://t.co/wdpwC3nqGR

In addition to MacFarlane, the court’s decision upset many others on Twitter:

No business should be allowed to discriminate against any American based on who they are or who they love. Our constitution requires equal protection under the law. Full stop. https://t.co/fkGGs1pYXs

The Supreme Court just ruled for the Colorado baker who refused to make a same-sex wedding cake. I hate that I predicted this a while ago but so goes the presidency, so goes the courts. Such a dangerous slippery slope in consumerism and discrimination.

Happy #Pride to everyone except the 7 Supreme Court justices who think refusing to bake a cake for people because they're gay is somehow an expression OF freedom, and not a limitation on it.

Disappointing Supreme Court decision, but, at the end of the day, gay couples will find non-bigots to bake them a wedding cake.

They’ll go on to live a happy life with someone who loves them, while the baker will stay full of hate and miserable.

•Baker gets to pearly gates•

Baker: did I live a life well enough to enter your kingdom?

God: you know, you were on the verge of going to hell but when you fought your way to the Supreme Court to keep those queers from getting cake, you really punched your heavenly ticket.

I believe that with a more competent defense team, the baker's argument could have been exposed as a fraud.

He also refused to sell the couple a "nondescript" cake. So the discrimination was clearly at the cash register, not in the baking room.

The Supreme Court just ruled narrowly for the Colorado baker who refused to make a same-sex wedding cake.

We have work to do.

Twenty-one states, including Colorado, currently have anti-discrimination laws protecting people from being refused service on the grounds of sexual orientation. 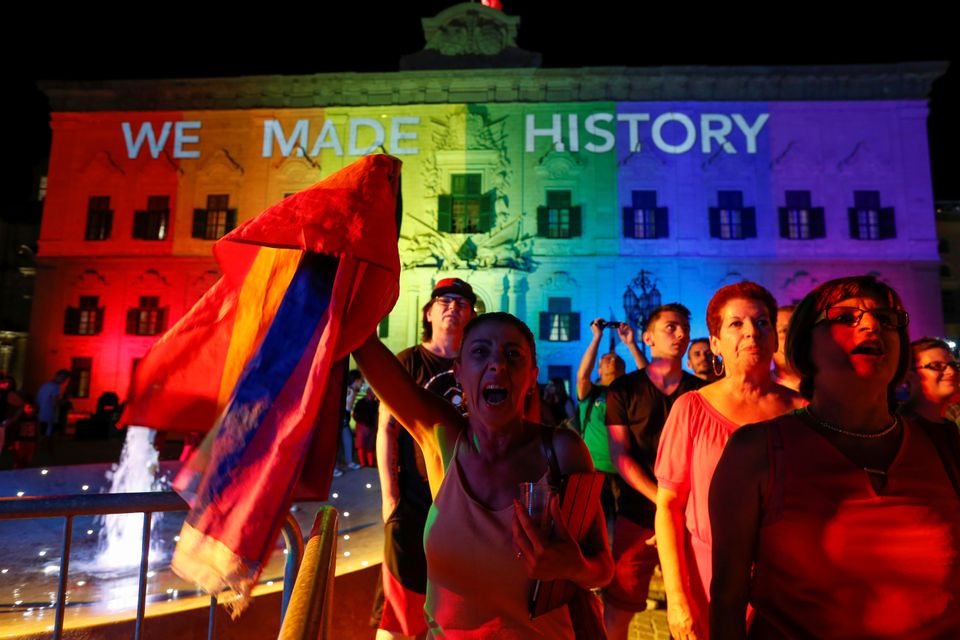