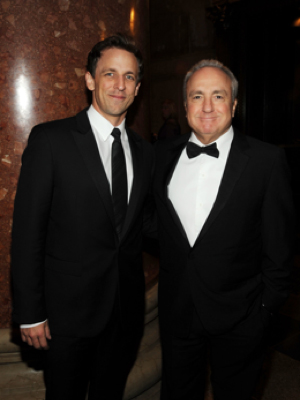 When Mitt Romney selected Paul Ryan as his running mate over the weekend, the most common reaction, according to a USA Today/Gallup poll, was: "[shoulder shrug] Eh." The second and more animated response to the news was: "Who will play him on Saturday Night Live?" For answers, the Hollywood Blog caught up with S.N.L. head writer and Weekend Update anchor Seth Meyers earlier this week at the New York premiere of Lawless, the new gangster film starring Shia LaBeouf and Tom Hardy.

When asked who is considered the current frontrunner to play the blue-eyed Wisconsin Congressman at Studio 8H, Meyers said, "I don't know. This is exciting, because obviously four years ago there was no argument that Tina [Fey] would play Sarah Palin. And now we've got a real horse race. There's a lot of people, a lot of guys I know, working on their Paul Ryan right now." When we prodded, he added, "I'm just saying, there are a lot of guys going to barbershops right now, asking for the widow's peak. ... Sometimes [a casting choice] is obvious, and sometimes it's Paul Ryan, where there's a few options out there."

Among the top candidates, in our estimation: Taran Killam, Bill Hader, and Bobby Moynihan. Cast members seemingly disqualified for the running include Jason Sudeikis (if he returns), who is already on double duty with impersonations of Mitt Romney and Joe Biden; Fred Armisen, who plays Barack Obama; and, barring any edgy interpretations of Paul Ryan, both Keenan Thompson and Jay Pharoah, who, although talented impersonators, are both African-American.

While Bobby Moynihan, of the three most likely cast members, looks least like the self-proclaimed fitness fanatic, either Taran Killam or Bill Hader would make smart choices in terms of physical resemblance and mimicry skills. Killam, a MADtv veteran, has proven himself a competent impersonator with well-received interpretations of Michael Cera, Pee Wee Herman, and Chris Pine. Hader, meanwhile, has played such wide-ranging real-life personages as Vincent Price, Julian Assange, Al Pacino, and political figures like Eliot Spitzer and James Carville. And if Moynihan, Killam, or Hader don't pan out, some Internet users have begun campaigning for Saturday Night Live to recruit outside talent for the role, nominating The Office's B.J. Novak.

Speaking of, what are the chances that Seth Meyers, who also has the blue eyes, boyish face, and skill to pull off the role, would elect himself to step away from the anchor desk and channel Paul Ryan? When we asked him earlier this week, Meyers demurred, "Look, I think after I played John Kerry, which everyone agrees is the greatest political impression in the history of the show, why mess with success?"