Seth Rogen and Judd Apatow criticized Washington Post critic Ann Hornaday for writing that films such as the ones produced by Rogen and Apatow -- as well as many others -- are part of what led Elliot Rodger to kill six people near the University of California's Santa Barbara campus on May 23.

"How many students watch outsized frat-boy fantasies like 'Neighbors' and feel, as Rodger did, unjustly shut out of college life that should be full of 'sex and fun and pleasure'?" Hornaday wrote, referencing the recent comedy starring Rogen. "How many men, raised on a steady diet of Judd Apatow comedies in which the shlubby arrested adolescent always gets the girl, find that those happy endings constantly elude them and conclude, 'It’s not fair'?"

"No one should be surprised when those impulses take luridly literal form in the culture at large," she wrote.

.@AnnHornaday I find your article horribly insulting and misinformed.

.@AnnHornaday how dare you imply that me getting girls in movies caused a lunatic to go on a rampage.

Apatow, too, used social media to comment on Hornaday's piece.

“@Sethrogen: .@AnnHornaday I find your article horribly insulting and misinformed.”She uses tragedy to promote herself with idiotic thoughts

“@melissa5001: @Sethrogen @marshallsheldon @AnnHornaday why is it always everything but mental illness?” Because that doesn't sell papers.

The tweets posted by Rogen and Apatow created lots of discussion in online circles, with Awards Daily editor Sasha Stone being one of the most vocal in her defense of Hornaday's ultimate point.

"What Hornaday says is that misfit creeps look to movies like that, unrealistic depictions of unattractive males getting hot women, and feel even more slighted by women or society as a result," Stone wrote in a lengthy piece on her site. "Why aren't THEY recognized? Why can't they have what that guy has? Haven't American films flipped since the 1970s to give everyone a deserved happy ending? Travis Bickle didn't get one, nor did many of the protagonists in the major motion pictures back then. But we had bizarre murders like Charles Manson and serial killers were on the rise. But mass shootings? That's a new thing. Can we look at movies as at least part of the whole culture around entitlement?"

Stone and Apatow also discussed the issue on Twitter.

.@AwardsDaily @Glenn__Kenny @cbumbray @Sethrogen she can criticize but can't handle criticism? That is as logical as her opinions.

.@AwardsDaily @Glenn__Kenny @cbumbray @Sethrogen we all are attacked online. For every reason. That is not a reason to not say she is wrong.

UPDATE: Later on Tuesday, Hornaday released a video to comment on her piece and the critiques lobbed at her from Rogen and Apatow.

"In singling out 'Neighbors' and Judd Apatow, I by no means meant to cast blame on those movies or Judd Apatow's work for this heinous action," Hornaday said. "But I do think, again, it bears all of us asking what the costs are of having such a narrow range of stories that we constantly go back to. [...] As a film critic, what I wanted to do was think about what echoes we heard from the larger culture and maybe pose some questions that might be useful."

Watch Hornaday's full response in the video below.

Apatow, meanwhile, also commented on the coverage his tweets about Hornaday received:

Here is how it all works. Anne says something thoughtless. I say it is wrong then CNN asks everyone to debate and it becomes TV.

I said no. I wonder if Anne can prevent herself from going on and becoming part of how these tragic events become profit centers for media

To read Hornaday's op-ed, head to the Washington Post's website. Sasha Stone's editorial on the story can be found here.

CORRECTION: A previous version of this story misstated the name of University of California Santa Barbara. 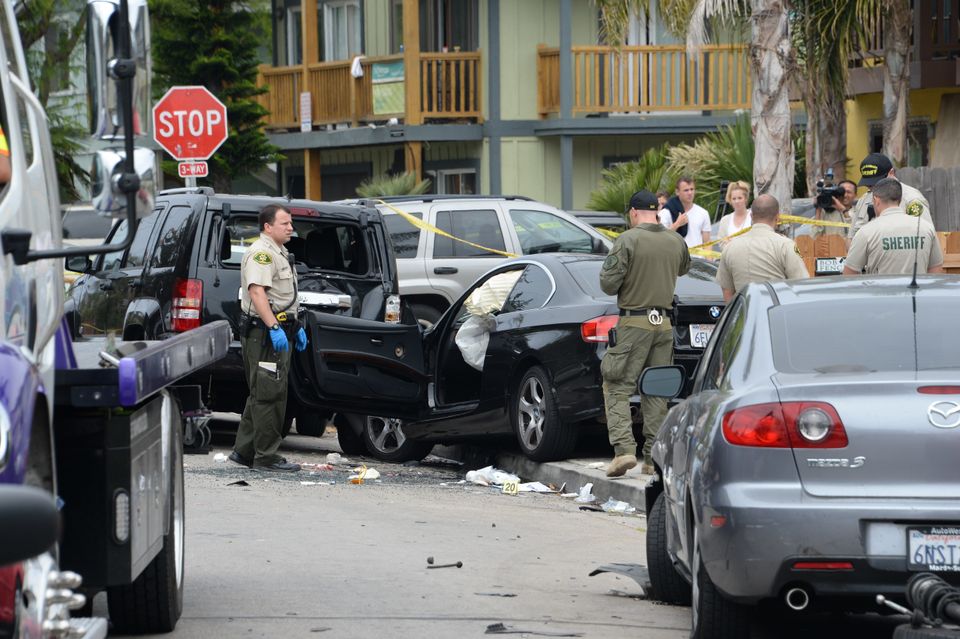 1 / 17
US-CRIME-SHOOTING
Investigators inspect a suspected gunman's car on May 24, 2014, after a drive-by shooting in Isla Vista, California, a beach community next to the University of California Santa Barbara. Seven people, including the gunman, were killed and seven others wounded in the May 23 mass shooting, Santa Barbara County Sheriff Bill Brown said Saturday. Brown said at a pre-dawn press conference that the shooting in the town of Isla Vista 'appears to be a mass murder situation.' Driving a black BMW, the suspect opened fire on pedestrians from his vehicle at several locations in the town. AFP PHOTO/ROBYN BECK (Photo credit should read ROBYN BECK/AFP/Getty Images)
Getty Images