Want to say hello to an ET? SETI scientists are here to help.

People in Seattle and other parts of the Northwest recently weighed in on what they would want to say to intelligent creatures from another planet.

At the SETI Institute in California, home of the Search for Extraterrestrial Intelligence, an ongoing program called Earth Speaks is collecting messages from citizens of Earth, young and old. They're looking for public opinions on the best way to say hello to the cosmos.

And what kinds of things are people submitting?

For half a century, SETI has scanned the skies with radio telescopes, looking for any type of intelligent, non-terrestrial evidence that might prove earthlings aren't alone in the universe.

While a few random signals have been picked up by the telescopes, there has never been a pattern that could be considered as having an intelligent, extraterrestrial origin.

Broadcast signals that emanate on Earth theoretically travel on a never-ending path across space. A technology-savvy civilization, on a planet orbiting a sun near our own solar system, may be just now picking up old radio and television broadcasts that left our world decades ago.

“If you take your rabbit ears and put them on a planet around Alpha Centauri and try to pick up the original broadcasts of “I Love Lucy,” you wouldn’t be able to. But if you built a big enough antenna, you could pick them up at any distance,” said Seth Shostak, senior SETI astronomer.

Earth Speaks is SETI's research project to help scientists determine the proper way to introduce ourselves "out there."

"It's a project to shift the discussion from just a handful of scientists who've been thinking about what happens if we detect intelligent life beyond Earth, and really make it a global discussion," said Douglas Vakoch, SETI's director of Interstellar Message Composition. Vakoch, a clinical psychologist from the California Institute of Integral Studies, is the only social scientist employed by SETI.

"At this point, we've had people from over 70 countries submit their messages," Vakoch told The Huffington Post. "The second thing we do is analyze those responses that people are sending us and look for some of the broader themes and also look at what that says about us here on Earth."

Vakoch points out the similarities that people want to say to potential extraterrestrials.

"We discovered that a major theme is: 'We are the humans of planet Earth.' What's striking about that is that we identify ourselves in these messages to extraterrestrials. We focus on our connectiveness and our commonality. People aren't typically saying, 'I'm from Australia' or 'I'm from the United States,' 'I'm Buddhist' or 'I'm Catholic.'"

There's one thing, especially, Vakoch says, that many people have consistently submitted in their messages that they hope will someday be sent into space -- one theme that resonates with men and women, young and old.

"The big message that cuts across all ages in both sexes is a very simple one: 'Please Help.'"

Check out these following message samples that have been submitted. If you want to see many more, go directly to SETI's Earth Speaks message page. 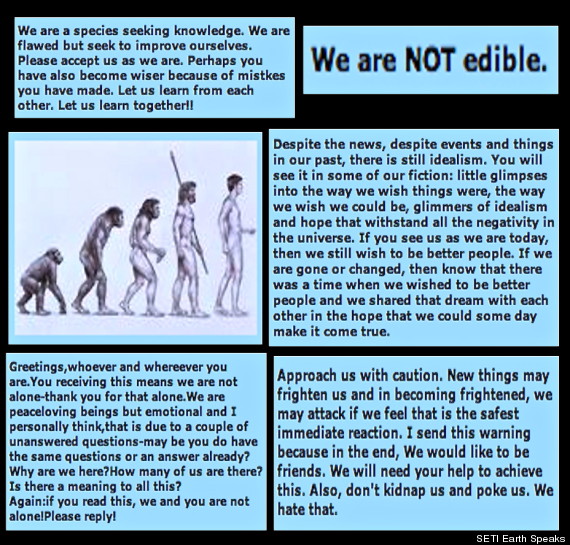 Vakoch suggests one of the reasons why there haven't been a lot of ongoing projects to transmit messages and try to make contact is because, in some ways, people have a cosmic inferiority complex.

"What do we have to tell another being? If they're so old and powerful, what do we have that matters? I could well imagine that, of all the civilizations in our galaxy, we're the ones that have the most exquisite balance of joy and sorrow. There's something about being at this critical juncture of our history as a civilization that may be very unique, and I think is more important to communicate and to reflect on for ourselves, whether or not there's even anyone out there."

To help get you in the mood to offer a heartfelt message to the stars, let's put this into a proper perspective -- the perspective of how very tiny we are compared to everything else around us.

In 1990, the Voyager 1 spacecraft was nearly 4 billion miles away from Earth, leaving our solar system at 40,000 miles per hour. Astronomer Carl Sagan asked NASA to turn Voyager's camera around and snap a picture of our home planet. It became known as the Pale Blue Dot photograph in which Earth appears at the center of a ray of light, resulting from the angle between Earth and the sun. (See this amazing image below) 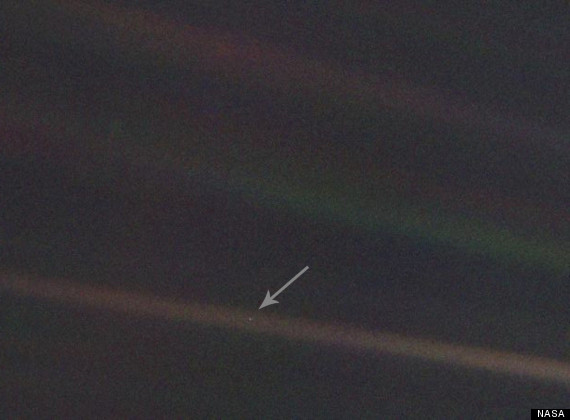 "We're really trying to understand our place and significance in the universe," said Vakoch. "It's completely insignificant on a cosmic scale and supremely important.

"It's symbolized so beautifully by the Voyager spacecraft. When it finished its science mission of going through the solar system, it took this snapshot that showed Earth as this pale blue dot. In that sense, that spacecraft was saying, 'Look, on a cosmic scale, everything on this little planet that we view as so important is insignificant in the whole universe.'

"But the beautiful thing about that spacecraft is the message it bore said exactly the opposite, which is, 'Look, whatever our limitations as a species, we can learn about our universe, we've developed a science and the audacity to explore beyond our own planet."

According to Shostak, radio waves can be used to carry audio and pictures, and you can put any kind of information you want on them.

And what would Shostak send into space as his own contribution to Earth Speaks?

"I would send the Internet, because the more you send, the greater the likelihood they'll figure some of it out," Shostak told HuffPost. "I'd just send everything. It's also one-way communication. They're probably far away and you're not going to get into a discussion about what you sent, so I'd just send it all. That's me."

You can go to SETI's Earth Speaks website 24 hours a day to submit your message and become part of the project of what earthlings would like to say to extraterrestrials.

At this point, there's no specific planned date for transmission of those messages into space, but SETI scientists want to gather as many as possible. They also want to know if the people of Earth think we shouldn't be sending a message to the cosmos.