Sure, we make different decisions when we are "sexually stimulated" according to Dan Ariely who cites this as one example of how we are predictably irrational. Other psychologists and behavioral economists also tell us we don't always act rationally, yet we already know that. Furthermore, as Daniel Gilbert famously noted, in Stumbling on Happiness, we often misjudge how we will feel about something in the future. 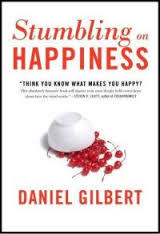 Yet a more helpful insight, for us is how we can enable ourselves - and others --to make smarter decisions and actually act on them. That is probably why Gilbert was moved to write the foreward to
The Power of Fifty Bits
, a book by Bob Nease, that provides seven actionable methods, coupled with real life examples, on exactly how to take action on our good intentions. 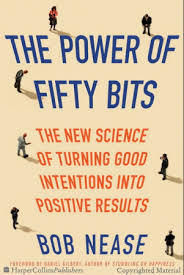 How to Pull Yourself and Others Towards making Smarter Choices?

I know that having regular oil changes is one of the least expensive and most helpful keys to keep my car running smoothly yet, last week, I (again) guiltily realized my car was way overdue for one. Nease advocates putting "cues" in the flow of your day to spur you to act in your own best interest. Per his suggestion I put sticky reminders on my car dashboard and bathroom mirror. Within two days I had the oil change done. Behind this mundane yet practical example is the underpinning of his book, which is based on his years of "tinkering" with ways to get patients to actual take the medicine that's prescribed to them and to see doctors when they needed to. He discovered that, rather than attempting to make them act rationally, even in to save money or health, "We would be better off reengineering the environments in which patients find themselves so that their natural inclinations lead to decisions and behaviors that better serve their interests over the longer term."

Referencing the starling fact that led to his book title, "of the ten million bits of information our brains process each second, only fifty bits are devoted to conscious thought." In effect, "We are wired for inattention and inertia," he concluded, consequently we "sometimes engage in self-defeating behaviors." Pease concluded that we need specific ways to overcome irrational choices we make within the "three key forces that shape nearly all human behavior: how we react to losses, delays and social expectations."

Power Strategies for Activating Good Intentions People Already Have
1. Required Choice: Mandate that people stop and deliberately choose among options
2. Lock in Good Intentions: Allow people to make decisions today about choices they will face in the future
3. Let it Ride" Set the default to the desired option and let people opt out if they wish

Enhancing Strategies to Guide People to Smart Choices
4. Get in the Flow: go where people's attention is likely to be naturally
5. Reframe the Choices: Set the framework that people use to think about and react to options
6. Piggyback It: Make the desired choice or behavior a side effect of something that is already attractive or engaging

One Uber Strategy
7. Simplify to make the right choices frictionless and easy; and spur hesitation where people might be tempted to make a suboptimal choice, thus slowing them down to consciously choose if they're headed in the wrong direction.

Ways to Reframe the Options
• Discover how the "decoy" effect of an hotelier responding to a guest's request for restaurant recommendations. He may suggest two, one that's five star rated, twenty-five minutes away, and a three-star option, just five minutes away. Then "as you ponder" he makes a third recommendation - the decoy - that can sway you towards one of the two earlier suggestions, depending on which of those two now looks more alluring, in comparison with the third suggestion.

• See a complementary way to sway: "presenting women with contraceptive options, starting with the most effective, and then working down to the least effective", can spur more women to adopt the best method.

Piggyback On a Desirous Outcome
While people have been occasionally tooth brushing for thousands of years. The Egyptians using twigs and leaves, according to The Power of Habit author, Charles Duhigg) yet the practice only took off when Pepsodent designed toothpaste, "to taste minty and remove the slimy 'mucin film' that naturally forms on teeth," writes Pease, thus "piggybacking" on the clean, minty mouth feeling to spur people to brush more often.

I asked Fifty Bits Author, Bob Neace, Several Questions
How can the fifty bits' strategies help with a vital, current behavioral challenge?
Nease offered two suggestions:
1. Go Vote: "Getting to the voting booth is a great example of how we don't always act on our good intentions; many of us intend to vote but fail to do so. A couple of the strategies from the book can help. First, lock in your good intentions by treating voting the way you would an important meeting: put it on your calendar, including an advance reminder. Second, find a friend or two who will go at the same time and plan on getting a cup of coffee or a treat afterward. This is an example of piggybacking - combining the desired behavior (voting) with one that's inherently desirable (treat with friends)."

2. Get More Active: Many employers are concerned that their employees are too sedentary. The old-school solution is to post information fliers in the break room and to hold informational seminars about the importance of physical movement. But I can guarantee that the results would be dismal. Instead, employers could remove the chairs from their meeting spaces; this changes the default from sitting to standing during meetings. If we engineer the environment to advantage sitting, we shouldn't be surprised that that's the behavior that results.

How is "The Power of Fifty Bits" a next step beyond design thinking and nudges?
"As the chief scientist at Express Scripts, my job was to strip away all the interesting stuff around behavioral science and get down to the essence. I needed to make the insights actionable and simple so that tens of thousands of our employees - including our patient care advocates - could put them to practical use. I hope this book enables others to adapt these methods to their work or life situation and better support those they seek to serve, in make smarter choices, and acting on them."

Is there an example of how people are using the strategies that wasn't included in the book?
"My wife, Gina, has tried out many of the strategies. She always wanted to be a ballerina, so she decided to use that desire to help her exercise for an hour every day. She found exercise videos based on ballet, so now what used to be a painful sixty-minute workout is instead a one-hour escape into her dream world."
Hint: The key benefit of this book is its practical specificity and relevant examples so you can picture and remember his methods to then adapt them to your work situation and to other parts of your life.

Other books I recommend these other books for additional insights on what affects your behavior and how you can make more gratifying and successful choices:
Originals
by Adam M. Grant,
Invisible Influence
by Jonah Berger and
Smarter Faster Better
by Charles Duhigg.
Download
Calling all HuffPost superfans!
Sign up for membership to become a founding member and help shape HuffPost's next chapter
Join HuffPost