It has been over four years signed ACA (originally PPAHCA; colloquially Obamacare) was signed into Law. Why is there at least as much controversy and outright anger today as there was prior to March 23, 2010? There are at least seven reasons why the ACA pot keeps boiling over. 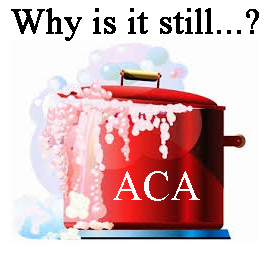 #1: Healthcare as win-lose scenario
The first reason for Americans' anger is ACA's usage as a political football. Democrats use it to prove their bona fides with their political base. The Republicans use it to bash the Democrats and to make inroads into Democrat as well as Independent voter support. Healthcare is played like a win-lose scenario, a game where there is an invariable winner (Washington) and a constant loser - us (We The Patients.)

#2: Slimy passage process
An old aphorism warns that there are two things you don't want to watch being made: sausages and Laws. The way that ACA was pushed through Congress in 2010 was nauseating: Chicago-style strong-arm tactics, smoky backroom deals, arm-twisting, legal maneuvers, word parsing, promise swapping, and outright lies. It was enough to make us sick.

ACA was the only piece of major social legislation in the history of our nation to be passed 100% along Party lines, without a single "Aye" vote from the opposition, Republican party.

#3: Differences between ACA promises and our reality
The discrepancy between what ACA promised and what Americans are experiencing is another reason for the ongoing furor over Obamacare. ACA was supposed to make health insurance more affordable, yet prices have gone up an average of 49%. ACA was supposed to reduce the number of uninsured yet at least seven million Americans lost their insurance as a direct result of ACA. The President promised to "bend down the healthcare spending curve." Best estimate for the cost of Obamacare is more than $1.7 trillion, which is new spending, that bends the curve upward, not down.

The effects of ACA on our day-to-day lives are apparent: a dysfunctional, hyper-expensive healthcare.gov; sticker shock for American families of a minimum cost for ACA insurance of $20,000/yr; an incomprehensible and increasing intrusive administration; the loss of full time jobs, converted into part time or eliminated altogether; UnitedHealth forced to fire more than 4000 Medicare doctors; the increase in money the ACA takes out of our pockets through taxes as well as insurance premium increases.

If you want the most recent proof that ACA fails to fulfill its promises, check out Texas and Vermont. In the Houston, 48,000 people eligible for ACA subsidized insurance decided to stay with the tax payer-supported Harris county program. While the premium costs were similar, the county program doesn't demand ACA's 40% co-pay. Vermont has already spent over $71 million to produce an Exchange that doesn't work. As a result, sick Vermonters are caught in an ACA administrative Bermuda Triangle where they are required to buy insurance but cannot, and therefore won't get the medical care they need.

#4: Which ACA are we fighting about?
Next there is uncertainty as to what the ACA really is. The "ACA" is constantly being changed, manipulated for temporary political gain. Every week there are new rules or rule changes coming from Washington. It's like playing a ball game with a baseball, then it's a beach ball, wait, that's a football, no, a rugby ball, that suddenly changes into a medicine ball...

As a member of the Board of Directors of our State-based Health Exchange, I can attest to the no-less-than weekly rule changes, adjustments, advisories, and new regulations that emanate from Washington with which we are supposed to comply in implementing our Exchange. To continue the sports analogy, how can you win a game when the goalposts keep moving and sometimes turn invisible?

#5: Medical effects on you and me - We The Patients
ACA's diversion of healthcare dollars is certainly enough to make anyone's pot boil over. All those trillions spent on healthcare bureaucracy are dollars that cannot be spent on health care! What good is having insurance if it does not lead to timely care? Average Americans see what is happening to our veterans though the VA system. We fear that the same will happen to us as a result of ACA.

More than thirty percent of U.S. physicians cannot afford to accept Medicaid rates. Think what will happen to the availability of medical care as ACA expands Medicaid enrollment while the number of doctors goes down. Then there is a recent survey showing that 70% (!) of California physicians cannot afford to accept the ACA reimbursement schedules. Therefore, they will not be available to provide medical care for the more than one million Californians who obtained in health insurance through Covered California, their ACA-mandated State-based Exchange.

#6: Executive Orders
Americans are increasingly angry over the way that ACA is being altered (illegally) by repeated Executive Orders from the President, usually when Congress is not looking. Our country's constitution clearly indicates that the legislative branch (Congress) makes the laws, and the executive branch (The White House) implements them. Congress has no power or authority to implement, and the President cannot make or change the Law. Without that distinction, there is no "separation of powers," a foundational principle of our Constitution.

The Executive Orders that altered the ACA include: closing the high risk pool; advance withdrawal of Medicare funds; subsidies allowed to pass through the federal platform; delayed/deferred deadlines such as employer mandate, Basic Health Plan, SHOP start up; acceptance of "self-attestation" as sufficient proof; and then there are over 1400 known exemptions.

#7: Who is in control: Washington or We The People?
While all the above explains why the fighting over ACA has not died down, I believe there is another, more fundamental reason: what we stand for, our bed rock value.

The U.S. was founded as an act of rebellion against governmental tyranny. Americans' most prized possession is our personal freedom. We do not like having anything imposed on us, particularly government control over our health and our lives. We The People understand that ACA, whatever it is today or may be tomorrow, is central control of our health care - the government chooses, not us.

THAT, more than anything else, is why ACA continues to be a bone of extreme contention.