Lame, pat, pre-packaged putdowns of Occupy Wall Street: We all deal with 'em, whether we're arguing with a neighbor, appearing on Fox, or answering the jeers of relatives who've just received a chain email that "really puts the protesters in their place."

Here are a few easy comebacks for your next argument. They cover everything from the supposed "hypocrisy" of demonstrators who buy cardboard (really!) to snarky comments about scruffy-looking anticapitalists with beards.

1. They say "Oh, look. The demonstrators buy stuff from corporations!" You say "Whaddya expect? Corporate lackeys in government have forced everybody else out of business!"

I don't know who came up with this lame picture, but it's making the rounds on Wall Street - and with all the other Americans co-opted by its propaganda: 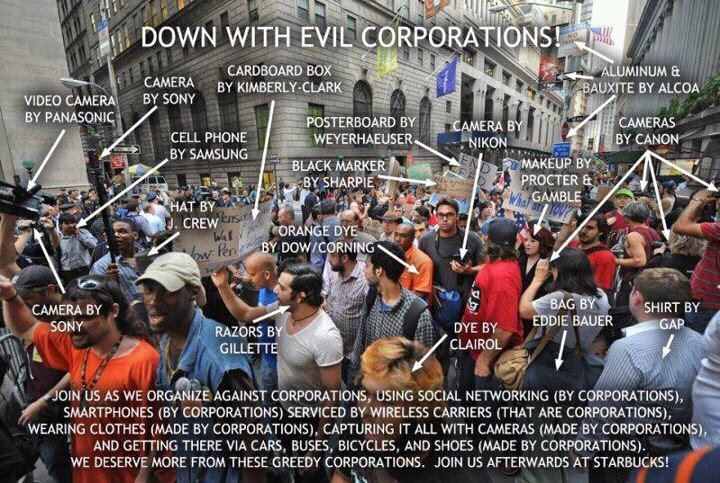 Hey, bankers! Is that the best you've got? Really? Because this picture is so lame that it actually gave us several of our talking points. We'll start with this one:

Corporations get generous tax breaks for not hiring people and shipping jobs overseas instead. They make money from those free trade agreements pushed through by their functionaries in the government. And Wall Street's making billions for not lending to smaller businesses that might compete with some of those mega-corporations.

Now you're calling the demonstrators hypocrites for buying stuff from corporations. Who else are they going to buy it from? Everyone else was driven out of business!

In a very real sense, that's why they're protesting.

2. They say "They hate businesses!" You say "No, they hate parasitical businesses."

Want to know something ironic? If the demonstrators had their way, most businesses in this country would actually do better. Why? Because the banks aren't lending to anybody but the mega-corporations who are already sitting on a ton of cash.

If the system was reformed, banks would lend to those smaller and medium-sized businesses that actually hire people. What's more, debt relief for the American consumer would unleash a buying wave that would spur widespread economic growth.

These "anti-business" protesters would be great for businesses -- all, that is, except for the dishonest and socially useless ones. You know, like the ones that underwrite politicians, think tanks, and television networks - who then proceed to make fun of demonstrations, as they're paid to do.

And you wonder why they're protesting?

3. They say "But it's hypocritical to buy corporate products and then protest corporations!" You say "You sound like a Communist."

That's right -- like a Communist. I spent a lot of time in Eastern Europe as protests very much like these were overthrowing the Soviet empire. You know what the old-timers in those countries said back then? They said "These people are protesting the State, but they're wearing clothes made at state-run factories and waving signs made with state resources! What hypocrites!"

(Well, they said it in Hungarian, or Czech, or Polish. But the meaning was the same.)

Tell your debate opponents they sound just like old Commies as they defend the uncompetitive, inflexible, and totalitarian system the corporations now run. Don't blame the demonstrators. They can't operate within the new system until we've reformed the old one.

That's why they're protesting.

4. They say "Did you know they paid all the TARP money back? They weren't bailed out." You say "Fine! Give every consumer in the country an interest-free loan!"

This is one of the inept moves that CNN's Erin Burnett tried on a protester. She, and everybody else using this line, must be either confused or financially illiterate.

Here's how the real world works: If you (we, actually) lend the banks a trillion dollars at 3% below the usual rates, that's the same as giving them a cash gift of $30 billion -- even if they pay all the money back!

And when you count the Federal Reserve's actions, like purchasing the banks' toxic assets through the "Maiden Lane" dummy corporation, the bankers have gotten billions more in additional bailout money. The demonstrators are right: A few mega-banks destroyed the economy, and we bailed them out.

This argument's as hollow as a mega-bank's promise. And that's why they're protesting.

5. They say "But still, they buy corporate stuff!" You say "They're called Occupy Wall Street, not Occupy Main Street. Anybody in that picture using an ATM?"

They keep coming back to this one, for some reason. That's why the picture says things like "hat by J. Crew." Oh, snap! Oh, wait -- what's your point again?

They're protesting banks, for crying out loud, not hat companies!

As we were saying: Lame.

6. They say "These protesters don't understand the free market." You say "What free market?"

We haven't had a free market for decades. We've had a lootocracy that makes money through deception, confusion, and obfuscation.

People should conduct their business in the light of day -- and gambling with other people's money should be illegal. The words "free market" and the phrase "Wall Street" don't belong in the same paragraph, much less the same sentence.

That's why they're protesting.

7. They say "Ha ha! Look at that bearded guy in the sandals!" You say "Hmmm ... A bearded guy in sandals protesting the moneylenders. Where have we seen that before?"

They love making fun of the demonstrators' looks, but it's pretty difficult to step outside the system and live outdoors without looking a little rough in the eyes of the moneyed classes. Jesus and his disciples probably looked pretty rough to some people, too. I'm sure the rich people looked down their noses at Him after He overturned those tables. That's not done in polite company.

Think about it: A guy rides into town on a donkey. Then he says the moneyed interests are exerting too much influence on the government -- and on some of the religious elite, too. And what was that about the wealthy? Oh, yeah -- "It's easier for a camel to pass through a needle's eye than for a rich man to enter heaven."

3,000 years of moral law condemns people who make excess profits from money without contributing to society. Every single prophet to make those arguments - which is to say, all of them -- was condemned by the plutocracy of the day.

No matter what you believe or don't believe spiritually, it's clear that oligarchic wealth has corrupted our politics, polluted our culture, and debased our basic sense of morality.

And that's why we're protesting. I've been to New York's demonstration, and Washington's. Next stop is LA. But they're all over the country.

If you haven't been to one yet, why not stop by? 'm not an organizer, just an admirer, but consider this an official invitation: Your presence is requested as democracy -- and history -- unfold before us.