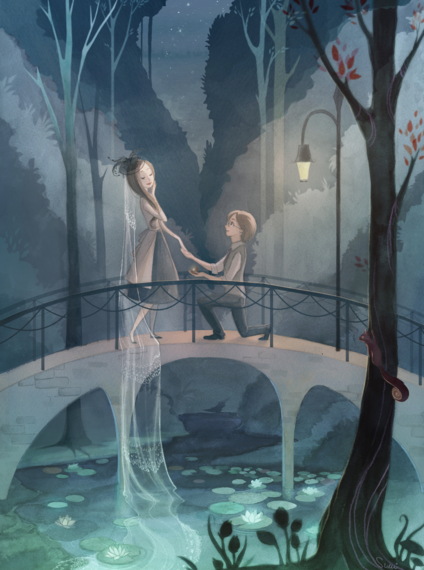 Some milestones in life are inflexible. High school proms are chained to rowdy adolescents and abundant awkwardness. Graduations require unflattering headwear, speeches, and crowds. Births, save the odd emergency, cannot escape hospitals, homes, and an unfortunate amount of goo.

Marriage proposals, offer delicious flexibility, as they do not require specific dates, times, locations, surroundings, garments, or obligatory attendees. They present of the few milestones in which you can assume full control.

While the classic choices, such as placing a ring in a champagne glass at a fancy restaurant, proposing at Christmas or New Years, and getting down on one knee in a beautiful park, are lovely, why not save "tradition" for those big life events that don't offer flexibility? As you make your engagement plans, I urge you to veer off the beaten path and consider these unique marriage proposal ideas.

Pop The Question with a Truly Unique Ring

For the past hundred years, diamonds have been the go-to choice for engagement ring stones. One way to make a proposal unique is to propose with something unpredictable.

"Unlike diamonds, colored gemstones are one of a kind," says Chloé Alpert of Teaman & Co., a modern jewelry seller that lets customers try on 3D-printed versions of their rings before they take the leap and buy them. "There will never be two colored gems the same; they are each as truly unique as a couple's love. Buying a colored gemstone engagement ring ensures you won't see another woman wearing a ring identical to yours." 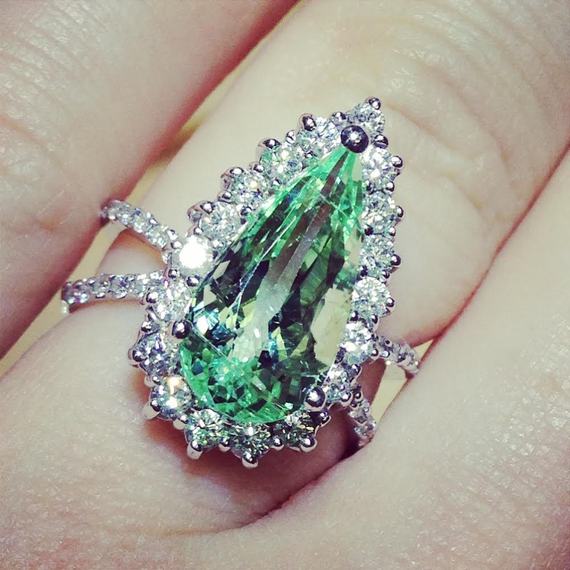 Many couples opt for diamonds thinking that they are the best way to show that no expense was spared when purchasing the ring. That said, Alpert argues that diamonds aren't the only precious stones in the world. "Just in the same way diamonds have various prices, some of the finest gemstones can be more expensive than diamonds -- it all comes down to quality."

Alpert's co-founder, Alastair Trueger adds that, "in fact, the gemstone alexandrite is so extraordinarily rare that stones over about two carats can go for prices well in excess of a diamond of similar quality." 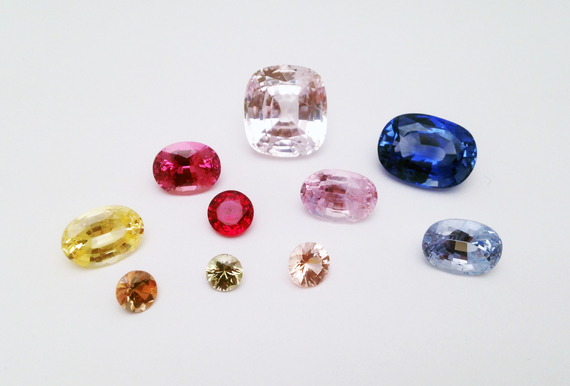 So don't be fooled into thinking diamonds are the only stones suitable for posh ladies.

While in heterosexual relationships, men have traditionally proposed to their female partners, this need no longer be the case. There is no rule barring any particular gender from proposing the prospect of marriage, and should a woman decide to buck the tradition, the couple's marriage proposal story will be all the more unique.

If you consider yourself more likely to be the recipient of a marriage proposal, consider surprising your partner by orchestrating a proposal of your own. Just because you propose to your partner does not mean they can't surprise you later on with a gorgeous ring of your own.

Though it is not common for men to wear engagement rings, it isn't out of the question for them to do so. You might buy an engagement ring made with unconventional materials, such as fossilized wood or tungsten, then swap it out for a ring made with a more expensive material at your wedding ceremony.

Etsy offers a wide range of men's rings made with off-the-beaten-track materials. There is no doubt that you can find something neat that would make for a perfect engagement ring surprise. Alternatively, consider offering a nice watch, precious cufflinks, or some other form of accessory a man might wear daily.

Many who march off well-trodden engagement paths leave the ring out of their marriage proposals entirely, offering something else in its place. Those who care little for jewelry would find an unforgettable proposal scene, a series of delicious meals, a special vacation, a vehicle upgrade, or a major living space upgrade to be far more meaningful than a ring.

Of those who care dearly about jewelry, it might actually be safer to pick out a ring together after the proposal has been made. For that group of prospective life partners, consider offering a creative IOU with the promise of an engagement ring that truly suits their taste.

It is not uncommon for couples to propose while on vacation, but usually it is just the fact that they are on vacation that they use for the special occasion. Consider taking your proposal one step beyond by planning something unique and unforgettable on top of a fabulous vacation and picturesque destination.

Should you need professional help, there are people who can help you plan special marriage proposals in all sorts of places. There is even a company called ApoteoSurprise that specializes in Paris-based proposals alone. 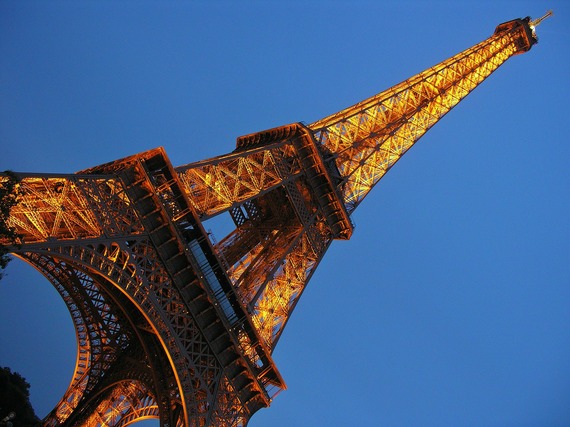 ApoteoSurprise is far from a small, new upstart. The company has been around since 2006 and has orchestrated nearly 1,000 proposals, including a tour in Cinderella's carriage with a magic shoe and a giant love note projected under the Eiffel Tower.

Hire a Team of Pros

Though their basic packages cover ideas and help you brainstorm on the perfect proposal premise, they also offer more involved support (presumably for U.K. customers only) in which they hire vendors (such as a hidden videographer) and hover behind the scenes to make sure everything goes off without a hitch -- plus clean up any decorations that might be set up so that you can float off to celebrate your engagement.

Jessica Barrie of Dream Occasions shared with me one of their particularly unique client projects:

"I have had one client that asked us to help decorate his flat before his girlfriend arrived home, however there was a rather personal and unusual twist.

As his partner loved chocolate so much, he asked us order and to lay personalized bars of chocolate throughout the flat leading into the bedroom with the bars getting bigger. We decorated the entire bedroom with candles, roses, lilies and rose petals everywhere, meanwhile the proposer decided to cover his upper body completely in chocolate!

We did ask him if there was a reason to this apart from the obvious... and he replied with "Well she loves chocolate so much, and she never says no to it, so I figured if I was chocolate... she can't say no to me!"

I absolutely thought this was just amazing and hilarious, so we left before the girlfriend arrived leaving a chocolate bar in the mailbox telling her to go up stairs.

We later got an email saying that she did indeed say yes and loved the proposal style!"

I received a unique marriage proposal of my own, and it was through art -- namely 21 different illustrated proposal scenes featuring me and my fiancé that he had commissioned from 18 different artists and posted on Reddit for me to find during what happens to be my customary Reddit morning browsing routine. 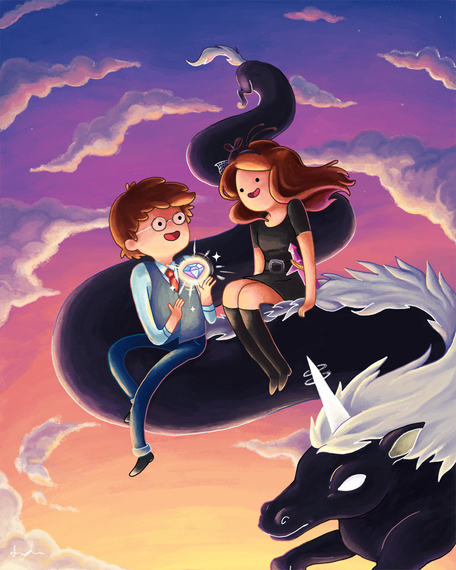 The proposal itself was surprising, unique, and breathtaking, and I love that the art will linger with us well after we are married and grow old. The internet loved the proposal, too (it went a bit viral) -- so much that my fiancé and I were inspired to open an affordable online art commissioning business: ArtCorgi. We now get marriage proposal orders all the time (and many orders in which people have artists re-create their proposal scenes).

One of my favorite examples is one in which a client had one of our artists illustrate himself proposing to his girlfriend at the exact location along the California coast where he planned to propose to her. When they arrived at that spot on the day of their proposal, he presented his now-fiancée with an envelope containing the art, and as she discovered the illustrated scene, he re-created it in real life by getting down on one knee and popping the question. In a sense, he captured the moment of his marriage proposal before it even happened! 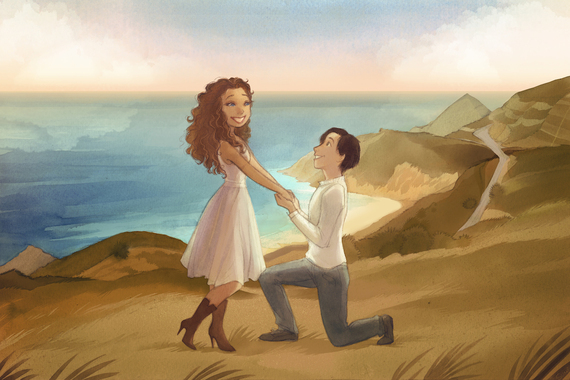 Put Off the Proposal

A responsible choice may be to discuss marriage proposals before orchestrating grand romantic gestures and investing in expensive jewelry. This opens up the opportunity for both members in a relationship to plan formal proposals and surprise their partners with rings while still enabling them to move toward the good stuff (namely, taking the plunge and diving head first into married life).

Tracy Osborn, the founder of the wedding planning website WeddingLovely did just that.

"My husband and I eloped last March and he still owes me a proper proposal. We were in a stalemate for at least six months regarding marriage because I would bring up him proposing to me, and he'd counter with, "Why can't you propose to me?" as a joke. We kind of just made the agreement to get elope, and he says that someday he'll finally propose to me when I'm not expecting it."

Ultimately, putting off your proposal can be the perfect excuse to jump straight into planning a unique, unforgettable wedding. And WeddingLovely offers the perfect resource for doing so.

Were you the recipient of a unique marriage proposal? If so, how did you (or your significant other) pop the question? Share your story in the comments.