Let the hordes of sunburned lobster-lovers crawl east along the Maine Coast during the summer. You can beat the crowds and discover the "other" Maine: the gem, mineral, and timber-rich, patriotic factory and college town side of our country's northeastern most state. 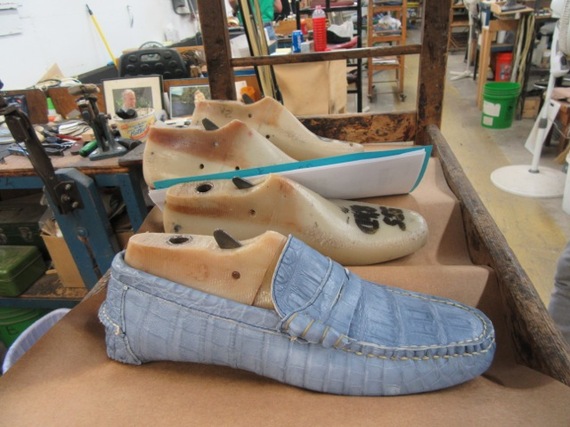 Yep -- the King Of Horror, Stephen King, lives here. But believe me, he's the least quirky of all the following inland Maine city draws. It's an hour and 45 minutes from Lewiston-Auburn to Bangor, but plan to stop in Augusta and Waterville on the way to up the quirk factor. This list will help you plan.

For much more about what to do in each destination, check out GetawayMavens.com, bringing you the Best Offbeat Escapes in the Northeast USA.

Home to Bates College, this Southern ME city has other offbeat appeals. 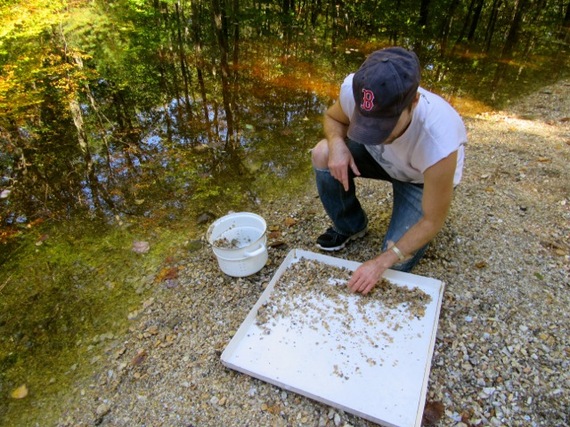 1. Hunt for Gemstones at Mt. Apatite Park, Auburn. Just three miles from downtown Lewiston, this decommissioned mining site sits next to a military installation and Little League ballpark and is unknown to many locals. Though you might not find eye-catching purple-green tourmaline or the cobalt-blue apatite for which the park is named, you will surely find tons of clear quartz and mica-studded rock. 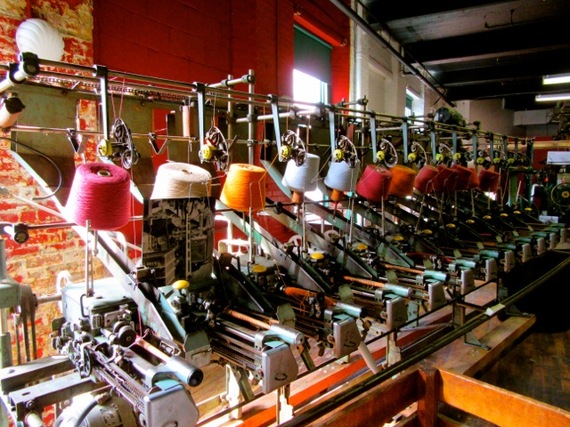 2. The deafening textile looms are now silent in the cavernous space where Museum L-A is housed. Lewiston was known for its textile mills, Auburn for its shoe factories, and you'll see evidence of both showcased artfully in this former industrial complex on the Androscoggin River. For decades, Bates Mfg. sold bedspreads all over the world, and here, humungous silk screens, used to decorate these quilts, stand like works of art against windows. Machines still fitted with colorful spools of thread remain beautifully industrial, displayed in raw form along with photos of those men and women who worked them. 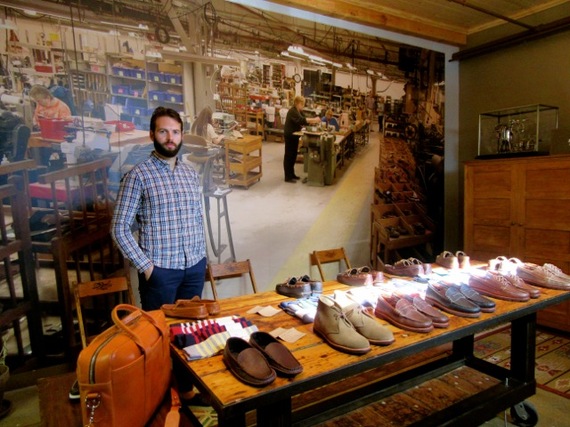 3. Take a Rancourt Co. Factory Tour and watch baby blue crocodile hide and buttery leather become high-end, hand-sewn shoes at this blast-from-the-past family owned shoe factory -- no conveyor belt in sight. Anyone interested in well-made and beautiful shoes will adore this very intimate look at artisans who craft 30,000 to 35,000 pairs a year.

4. Join a Sunday Meeting at Sabbathday Lake Shaker Village, New Gloucester. You'll find the very last Shakers (only three left as of 2015) in this whitewashed collection of buildings on 1,800 acres of farm and forest land about 10 miles from L-A. Though you'll learn more about the history of the Shakers at New Hampshire's Canterbury Shaker Village, Sabbathday is the last active Shaker Community in the world and you can actually join in a "Meeting" every Sunday at 10am, participate in "Testimony" and sing along to several of the thousands of known Shaker songs (no cameras or recording devices allowed). 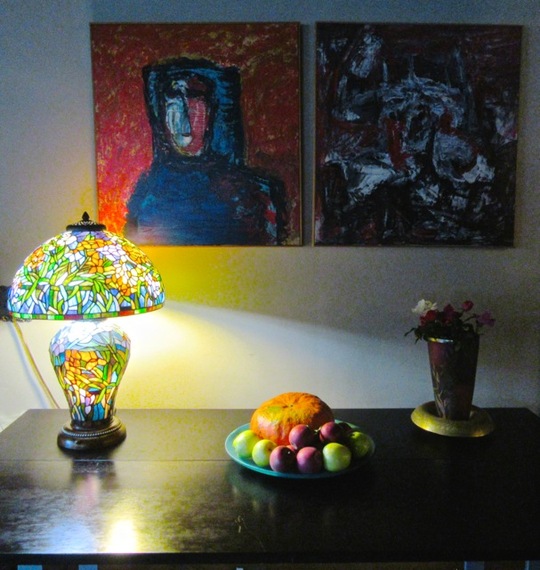 5. Stay at the Munroe Inn, considered one of the "Best Queen Ann Restorations" in Maine (per Yankee Magazine). The original owner was a wealthy lumber tycoon who displayed his wealth in the oak walls, ceilings and floors throughout the 1899 home. Décor is eclectic -- Victorian to Deco to Modern -- reflecting the diverse aesthetic of charming new owner, Olga, who has also updated guest rooms, which sport upscale amenities, and antiques.

Maine's State Capital is also home to the oldest wooden fort in the USA. 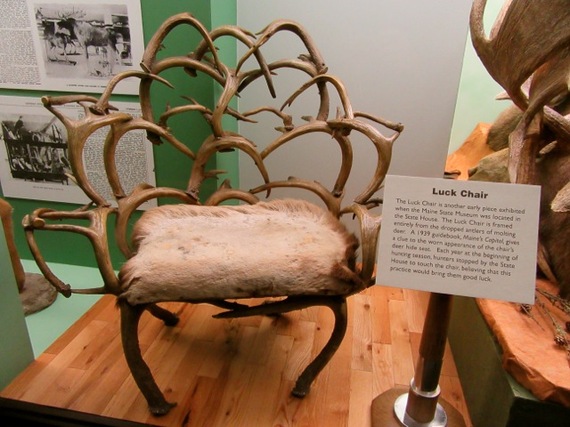 6. Check out the "Luck Chair" and other articles of curiosity at the Maine State Museum. The "Luck Chair," not so lucky for the deer, is made of Deer Antlers and fur worn down by hunters who came to rub it for luck on the first day of Deer Hunting Season. The Museum excels at creating scenes and environments. Take "Maine @ Home" where visitors are invited to sit in a 1960s living room and catch up on period TV shows, pull a flush-toilet chain to hear its rush of water, and step onto a lakefront porch complete with the sounds of boat motors and crying loons. 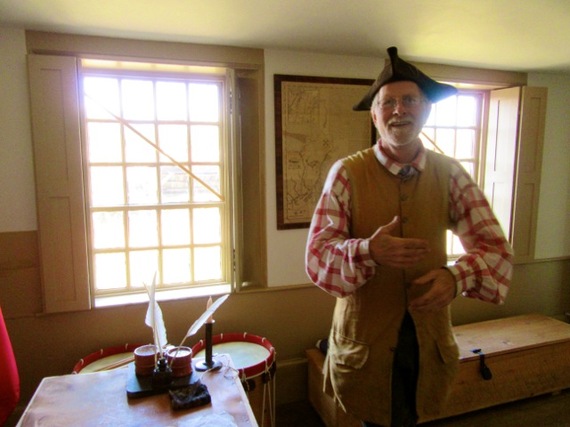 7. Visit the circa 1754 Old Fort Western, the oldest remaining original wooden garrison in North America -- a 100 ft. by 32 ft. remnant of the French and Indian War. In the mid 1700's, Augusta was full-fledged wilderness and it was here that entrepreneur, Captain James Howard, shingled the fort, set up shop and was determined to create a thriving dry goods business. Traders came up the Kennebec River (right outside the door) from the shipbuilding metropolis of Bath, ME, brought their families and stayed. 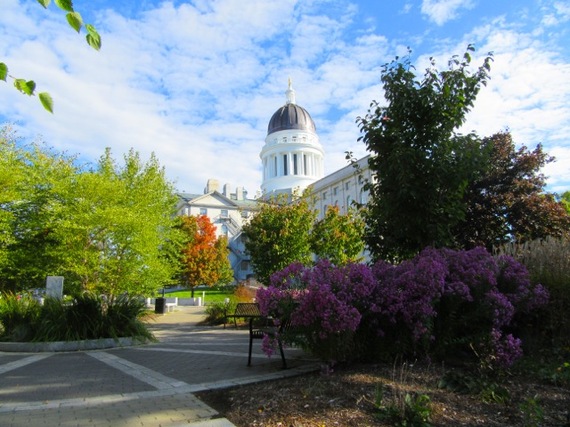 8. Maine's State Capitol building, is as unembellished as a Puritan home, but oh that view from the porch, where, one imagines, many a deal has been struck. 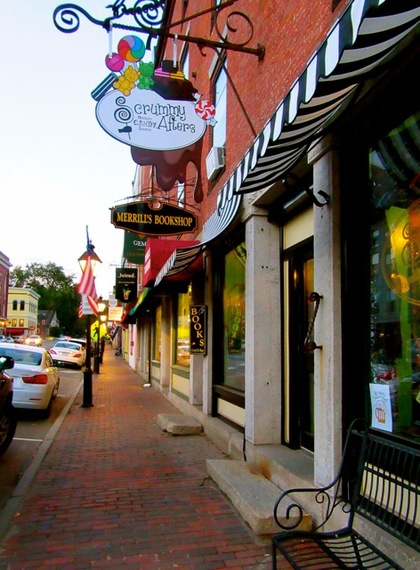 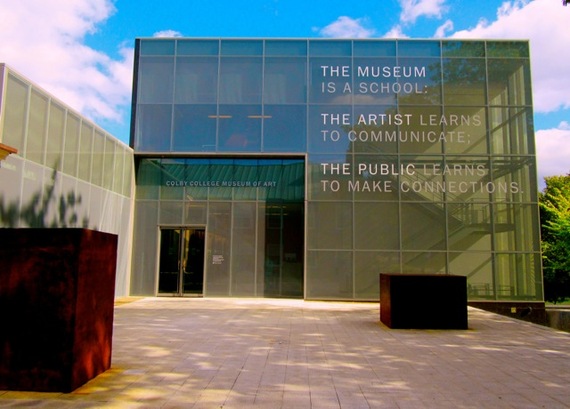 10. Colby College Museum of Art is Maine's largest art museum with the largest number of Alex Katz's on display and in storage. (Katz attended the prestigious Skowhagen Art School, about 20 minutes from here). The latest expansion, a stunning glass building, added an airy 10,000 sq ft. to an already large space in which you'll find Singer Sergeant, Winslow Homer, Copley, Renoir, Remington, Rockwell, Calder, and a 1790 John Rogers portrait of George Washington and much more in its many galleries. 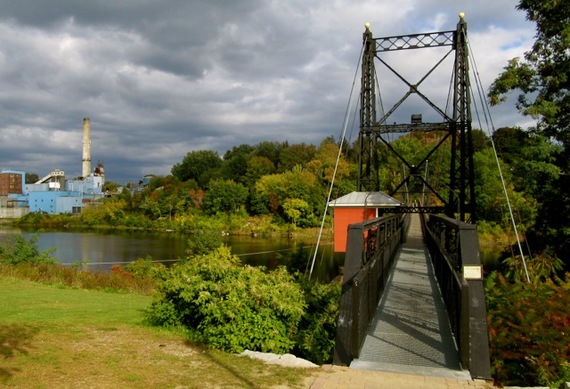 11. Walk across Two Cent Bridge at Head of Falls Park. Waterville was once a shipping and manufacturing center. (Hathaway Shirts, the company that supplied uniforms to Civil War soldiers, operated in Waterville for 165 years and closed its doors in 2002). Owners of the mills built a pedestrian bridge linking immigrant neighborhoods to the factories across the river and charged each worker a penny each way to cross (hence its name). A stroll over the river costs nothing now and provides visitors with beautiful views and time to contemplate corporate greed. 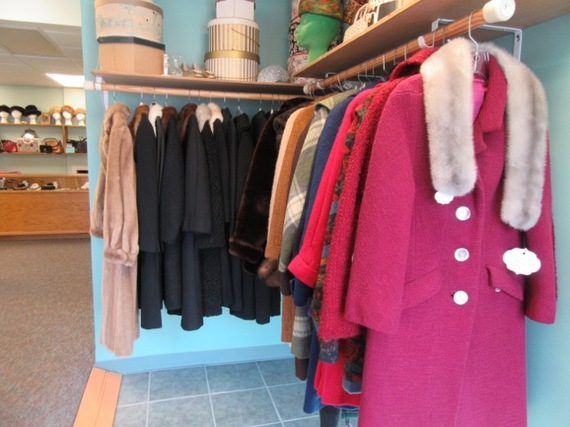 12. Secondhand has never looked so good or has been better priced than at Heirloom Antiques and Vintage -- a consignment shop gaining fans from Boston and other cities. A good number of the gently used items here were purchased decades ago in snazzy Waterville department stores, when the town was a tony retail center, and come from local estate sales. Most are resold for under $35. Sequined shirts and gowns, in excellent shape are just $19, and my favorite -- a Faux Fur full length Pucci coat for just $65.

Stephen King, military heroes and greeters, and monks who make you lunch. 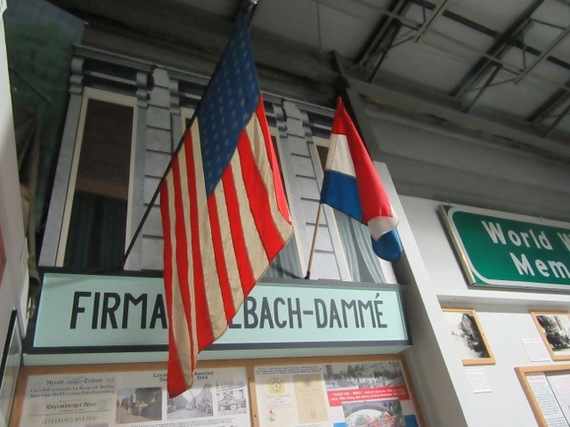 13. The Galen Cole Land Transportation Museum is no boring assemblage of old trains, old cars and antique fire trucks. Oh, contraire. Yes, you'll find all of those things in this nondescript putty-colored warehouse flanked by WWII Memorials (4,914 Bangor citizens served, 110 lost their lives), but several programs and exhibits here stand out in quirkiness and poignancy, among them, the "Talk to A Vet" program, where veterans from all wars build connections with school groups through Q&A sessions each morning, and the famous American Flag that hung from a main street window when U.S. troops, under General George Patton, liberated Luxembourg from the Nazi's. 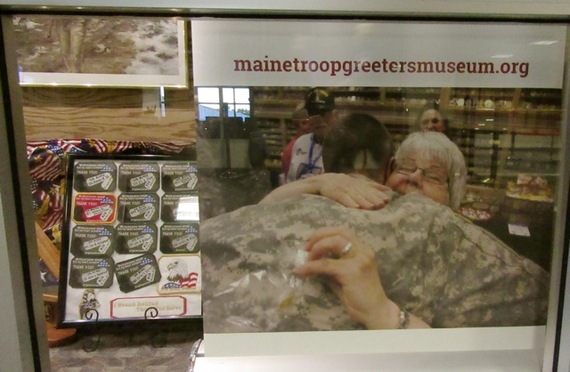 14. Who are the Troop Greeters a.k.a., "The Pride of Bangor?" Find out at the Bangor International Airport. Bangor is the prime refueling stop for military planes returning from overseas, and the first place that soldiers returning from war land, often in the wee hours. Since 2003, about 75-100 civilians, many retired military, have greeted nearly a million of these tired and despairing men and women as they disembark from planes and come through the airport halls. Troop Greeters form lines, hold signs of encouragement and dispense openhearted hugs, making an immediate positive impact. Even if you don't time your visit to coincide with one of these greetings, you can still see the collection of coins, patches, posters and other paraphernalia donated by grateful soldiers. 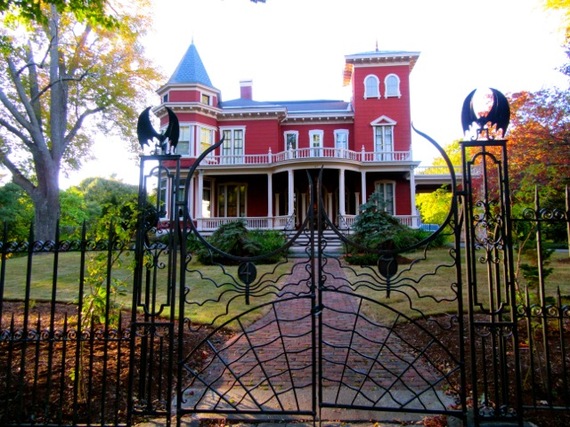 15. Visit Stephen King Sites. As most King enthusiasts know, "Derry, Maine" is the author's stand-in for his hometown of Bangor. Many scenes in King's books are drawn from actual attractions and places here. But perhaps the most popular of King's "sites" is his deep coral colored Victorian home, fenced in by black wrought iron spider webs, bats and a big capital K on hefty gates. 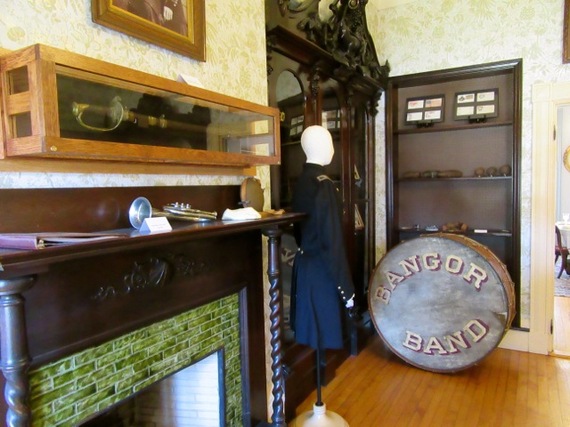 16. The Bangor Historical Society is housed in the 1836 home of lumber baron, Thomas Hill, designed by Trinity Church (N.Y.) architect, Robert Upjohn. Of course, you'll find touchstones like the sword that Joshua Chamberlain carried into battle at Gettysburg and John Hancock's bathrobe (?!), but perhaps the weirdest artifact is the 1895 Bangor Band Ceremonial Drum lost in Boston in 1928 and found just this year (2015) on Ebay! 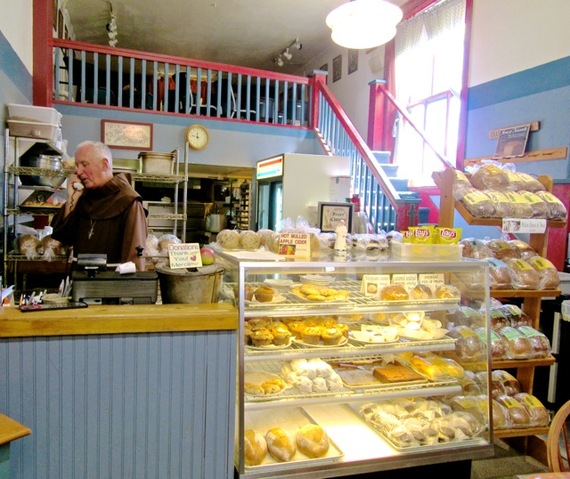 17. Have at least one meal at the Friar's Bakehouse -- a singular Bangor experience and one you shouldn't miss. Actual frock-wearing Friars, from a cloister nearby, run this modest restaurant/bakery. Savor freshly made soups ($4.75), sandwiches ($5.25) -- each order large enough for two to share -- on plastic-covered communal tables while Ava Maria or other Church tunes waft through the room. The friars are funny and personable, but will not allow cell phones -- so turn them off before you walk through the door.