When Tahani Jabarin started the Introduction to Sewing and Dressmaking program at the Dar Al-Hijrah Islamic Center in northern Virginia, she was hoping to create "a road to self-sufficiency" for Muslim women in her area. Made possible by a $10,000 grant from Islamic Relief, a U.S.-based charity organization, the sewing class graduated its first class of 12 students on Nov. 5.

Jabarin, 37, told The Huffington Post she could not be happier with the results. "Thank God things went great," she said.

A social worker at Dar Al-Hijrah with no background in sewing, Jabarin said she chose the subject because it's something women with children can do from home. Jabarin runs the program, but she hired a woman with commercial sewing experience to teach the actual classes. Women ages 18 and above who earn half the area median income or less, or who receive financial assistance like food stamps, were eligible to sign up for the first round of lessons, as long as they agreed to attend every one, Jabarin said.

Participants were also asked to pay a $300 fee for the class, but were issued waivers if they were unable to afford the cost. In exchange, the women received six hours of instruction every week for 16 weeks, with an additional four-hour workshop on starting their own business. Projects included clothing and home decor like curtains and lampshades. Dar Al-Hijrah sells the students' work on-site, Jabarin said, and each student gets 50 percent of whatever proceeds her pieces bring in, meaning the women can receive an income even during the program. 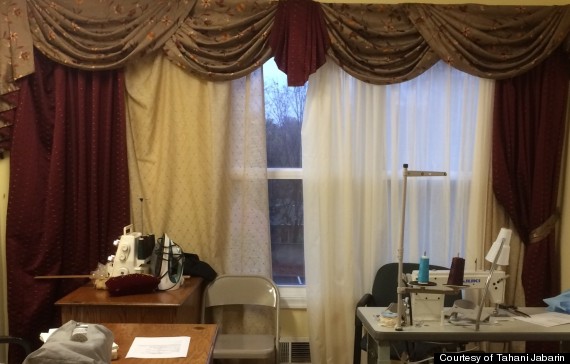 Perhaps most significantly, those who completed 100 hours of sewing received their own machine, which Jabarin described as crucial for ensuring the women would continue their work after graduating. Of the 12 women who graduated in November, Jabarin said that more than half started making an income within two weeks of completing the course. A new 16-week course, she said, began earlier this month. 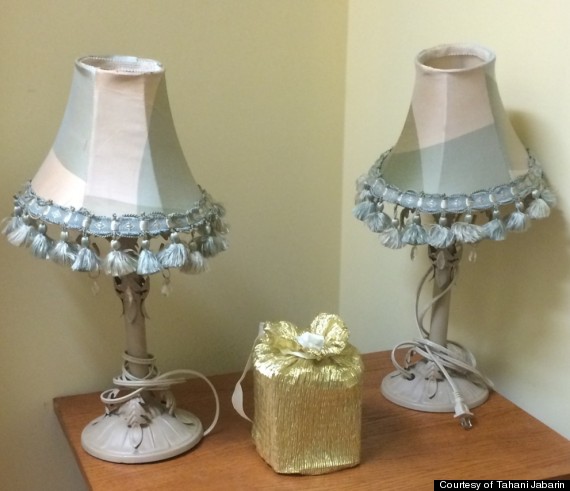 Jabarin spoke with one of the graduates on behalf of HuffPost Religion to illustrate the program's effect on participants. Due to a language barrier, Jabarin spoke to the woman in Arabic and translated her answers into English.

How did you find the sewing group?

I was born in Sudan, and I have eight children, ages 25, 23, 17, 9, 8, 5, 2 years old and 4 months old. As an immigrant mother with eight children, I was facing financial instability that lost me my apartment and led me to seek a home in a shelter. Fortunately, the shelter I was placed in happened to be within walking distance of Dar Al-Hijrah Islamic Center. Through [a social worker's] help, I joined the sewing class, which enabled me to become self-sufficient via training whilst establishing an income. I applied for a waiver, since I had no income through which to pay for this class, and I received it, rendering my sewing lessons charge-free.

What have been some of the biggest struggles in your life since coming to the U.S.?

My most immediate issue was the language barrier. I required some time to learn the English language and become accustomed to speaking it. Secondly, as a mother, I faced the enormous problem of finding an apartment to rent for me to live in with my children. Having been blessed with a large family, it was difficult finding a place big enough to accommodate us. Not being able to be a self-sufficient mother who could provide for her children shook me to the core.

In what ways, if any, does the holiday season affect these concerns?

The holiday season is more taxing, as this is a family-oriented time during which I wish to present my children with the most joyous experience possible whilst also working hard to provide for them. I received support from my children’s elementary school, which donated gift cards to me in order to be able to purchase the Thanksgiving turkey. Simultaneously, I receive continuous support from Dar Al-Hijrah, which has a thrift store on-site. At any point that I need assistance buying clothing, I apply for aid and receive a $100 gift card to use at the store in order to keep my children and myself warm during this colder time of year.

In what ways has joining the sewing class made a difference in your life?

During this difficult year of my life, these obstacles enclosed me in a severe depression that I even received therapy for. Nothing seemed to really help me deal with the crippling mentality that I was unproductive until I joined the sewing group. Walking down from the shelter to the Islamic Center every Monday and Wednesday became something to look forward to, and my mood was automatically elevated on those days.

Additionally, the shelter kept telling me that I had an “exit date” and that I had to find a place to live. It just so happened that my graduation date coincided with my exit date from the shelter. It was my graduation, and the program director’s recommendation, that allowed the shelter to extend my stay for one more week. My life had finally begun looking up. I was becoming self-sufficient, which had always been my dream, and I was finally able to provide for my children.

I learned that much like sewing, life occurs in several stages, not all at once. Having acquired patience, I was able to push myself through these difficult times and persevere until I was able to improve my life. Having received my certificate of completion and my sewing machine, I finally felt like a productive member of society.

What are your hopes for improving your family’s circumstances moving forward, and how will the skills you’ve learned through the sewing group help you?

The day I graduated, I received my sewing machine from Dar Al-Hijrah Islamic Center. Furthermore, Dar Al-HIjrah connected me with the county’s case workers, who held several workshops that taught us to transform our sewing skills into a commercial method in order for us to establish our own businesses and become self-employed.

I walked into this class thinking I would only be taught to sew clothing, but soon thereafter I learned that was not the case. Aside from sewing clothing, I learned how to create home décor items like handkerchiefs and even custom-made draperies. I am now beginning to build my clientele, and I plan to develop my skills in this field in order to become more proficient and to find even more stability in my job. This way, I will finally have a steady income and be able to independently support my family.

Learn more about Islamic Relief and how you can contribute to its ongoing grants and programs here.