JINDO, South Korea, April 15 (Reuters) - South Korean parents mourning victims of last year's Sewol ferry disaster cried out their names at the spot where the ship went down, threw white chrysanthemums into the sea and made offerings of their loved ones' favorite snacks.

A ship carrying about 200 family members made the hour-long trip to the site of the April 16, 2014, sinking of the 6,800-tonne vessel on Wednesday before returning to port at Jindo. 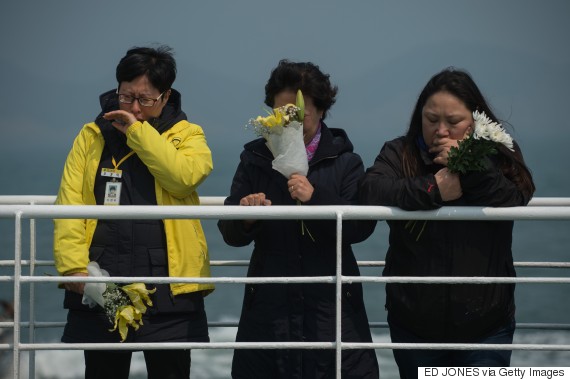 Relatives of victims of the Sewol ferry disaster weep as they stand on the deck of a boat during a visit to the site of the sunken ferry off the coast of South Korea's southern island of Jindo on April 15, 2015. (ED JONES/AFP/Getty Images)

"I am so heartbroken. In such cold water, to think how cold she would have been," Lee Jung-seob said of her daughter, Hye-kyung, one of 250 pupils at the Danwon High School in Ansan, an industrial city on outskirts of Seoul, who died.

"As she ended her life, to think how she would have missed her mum and dad and her family. My heart aches so much."

The floor leader of the ruling Saenuri Party, Yoo Seung-min, was met by furious parents when he tried to join a memorial service at the port and was escorted away, a reflection of the anger towards the government of President Park Geun-hye over its handling of the disaster. 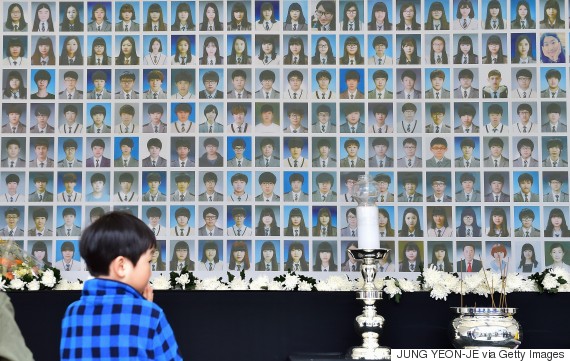 A boy looks at portraits of the victims of South Korea's Sewol ferry disaster at a memorial altar at the Gwanghwamun square where relatives of the victims are camped for a sit-down in Seoul on April 15, 2015. (JUNG YEON-JE/AFP/Getty Images)

The Sewol set off on April 15 last year from Incheon, west of Seoul, for a routine overnight voyage to the holiday island of Jeju with 476 people on board.

The ferry, later found to have been structurally unsound and overloaded, capsized when it made a sharp turn in the waters off the southwestern island of Jindo. Many of the children followed instructions to stay in their cabins as the crew scrambled to safety.

The chief engineer was convicted of homicide and jailed for 30 years after South Korea's worst sea disaster in decades. Fourteen surviving crew members, including the captain, were jailed for between five and 36 years for negligence. 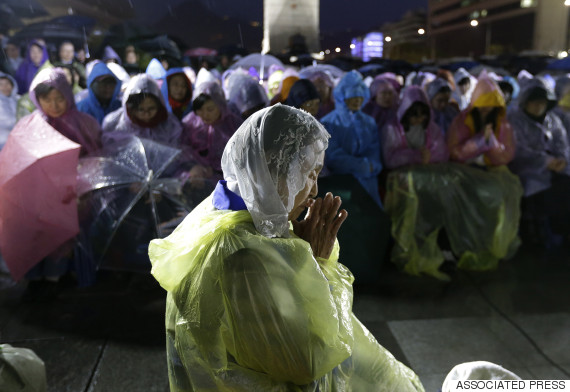 A woman prays during a service to commemorate the first anniversary of the Sewol ferry sinking in Seoul, South Korea, Monday, April 13, 2015. (AP Photo/Ahn Young-joon)

Heartrending stories emerged of children tying their life jackets together, of fingernails torn of children trying to climb out of the sinking hull and of pupils joking it felt like the Titanic as the ferry began to list.

More than 300 people died in the disaster, with the bodies of nine still missing.

The government is expected to decide soon to raise the vessel, with the hope of finding the remains of the nine.

"We believe the ship must be raised," said Park Eun-kyung, whose niece, Huh Da-yun, is missing. "We are certain she is inside the ship. We just have to take her out." 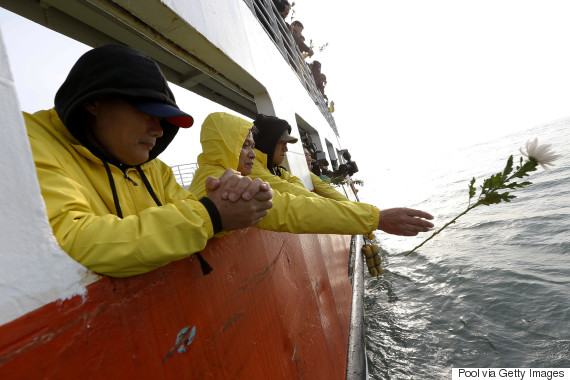 Relatives of a victim of the Sewol ferry disaster throw flowers to pay tribute to the victims on April 15, 2015 in Jindo-gun, South Korea. (Jeon Heon-Kyun - Pool/Getty Images) 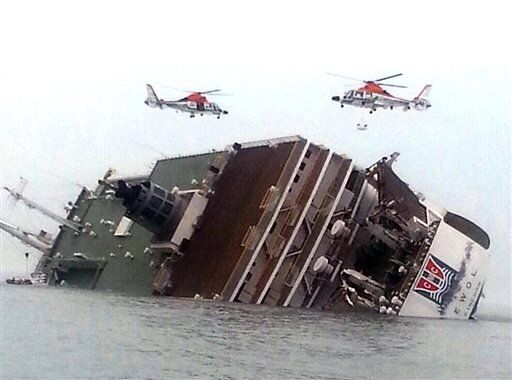