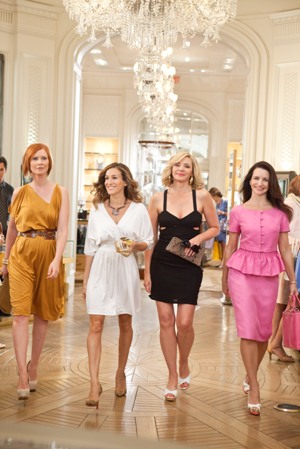 Last night I saw Sex and the City 2. Just before I went, my mother (who is a fan of the toned-down re-runs and the first movie) said, "It'll be interesting to see if they can make marriage and motherhood sexy." Walking into the screening room, I couldn't help but wonder, Does sexy die with I Do?

In this sequel to the hugely-successful box office hit from two years ago, writer and director Michael Patrick King tackles that question -- how do independent, sexy women of 2010 mesh with traditional roles that they now find themselves in (like wife, mother and menopausal hottie)? Fans of the first installment from two years ago will remember that it ended with Carrie (Sarah Jessica Parker) and Big (Chris Noth) marrying at the courthouse; Miranda (Cynthia Nixon) reuniting with Steve (David Eigenberg) after his infidelity; Samantha (Kim Cattrall) leaving Smith (Jason Lewis) and L.A. to come back to singledom in NYC; and Charlotte (Kristin Davis) having baby, Rose. But now they each have an issue: Carrie's marriage is losing the sparkle; Miranda's career defines her, but she hates her law firm; Samantha is confronting menopause; and Charlotte's overwhelmed by motherhood (and the potential threat of her hot, bra-less nanny). 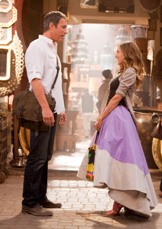 King says one of the main themes of the second movie is how "traditional and nontraditional collide." It's about how these women, who saw themselves one way, mesh that self with how their roles are traditionally viewed by society. And it's explored throughout: the girls go to Abu Dhabi and you have the overtly sexual Samantha contrasted with the veiled women, who also take on different levels of how covered they are, which the girls analyze over their morning meal. (Carrie says, "I have to say, I'm digging the sequin trim on the Real Housewife of Abu Dhabi.") Then you have an over-the-top gay wedding in Connecticut with all the traditional elements, plus Liza Minnelli doing a rendition of Beyonce's "Single Ladies" (look out Betty White; Liza's the new AARP darling!).

Carrie spent the last two years decorating her and Big's apartment and wrote another book. This one, I Do, Do I?, is about the transition from being single in the city to being in a comfortable marriage; their days of hitting the town are over and now Big wants to relax on the couch, watch TV and eat dinner in. However, Carrie still has that desire to get dressed up and hit the town. And when she forces her husband to go out, it turns ugly and the insecure, loathsome Carrie Bradshaw returns. She drags Big out to Smith Jarrod's movie premiere and gets miffed at him talking to a Spanish banker (played by Penelope Cruz). This prompts a discussion about how to put the sparkle into marriage. Carrie's book is poorly reviewed by The New Yorker, which symbolizes that she's not an expert at marriage like she was at dating -- that marriage takes work, especially in the first two years. And more so than in the past, I think the audience will commiserate with Big, not Carrie. (I also found Miranda to be the most admirable of the characters in this story; she and Steve are more solid than ever and she's finally finding balance in life.)

The movie's biggest flaw is the lack of sex and the lack of the city. King explains that the opulence of past seasons of SATC didn't feel right in recession-sunken New York, so he wanted to take the show on the road (to Abu Dhabi) so that the girls could have a new, fun experience and also do everything over the top. "That's what I want the audience to have -- an escape, a total escape," says King. And the lack of sex? Well, Samantha has some, so don't worry, there's a little. But because the characters are away from their husbands for much of the story, they're left to share their girl power with each other. Although Carrie's former flame, Aidan, does come into the picture while they're in the Middle East and there is an incident that could challenge her marriage. 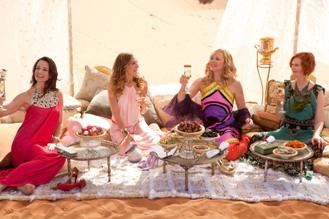 I would be remiss not to mention the fashion. I almost forgot how fun it is to see what Carrie Bradshaw wears -- the quirky outfits that costume designer Patricia Field puts on her. One of the opening scenes is a flashback of the girls in 1986 when they all met -- Carrie's not far from a Flashdance extra and Madonna-wannabe; Charlotte's the epitome of sweater-over-the-shoulders preppy; Miranda's a working girl in boxy suit and sneakers; and Samantha's a CBGB bartender who looks like a hair-band groupie. Fast forward 24 years and we have Field's interpretation of where these women are now, as they are in their 40s (and 52 for Samantha, who actually addresses dressing "too young"). And what they would wear in the Middle East (where she and her team members traveled to scout out what people wear in the United Arab Emirates) and how that would translate to the fab four's costumes (including gold harem pants, flowing kaftans and turban-inspired headpieces).
Should Sex and the City fans go see it? Yes, without a doubt because we all need our SATC fix. Is it Michael Patrick King's best work? No. But I still consider him the premiere social documentarian of our time regarding women's sexual evolution. And to answer my question about sexy ending with motherhood and marriage, well, to be honest, I think a lot of the sexy dies; but maybe that's because love and comfort take its place and it becomes less necessary. But a little jewelry and time apart never hurts to up the sparkle, it seems.