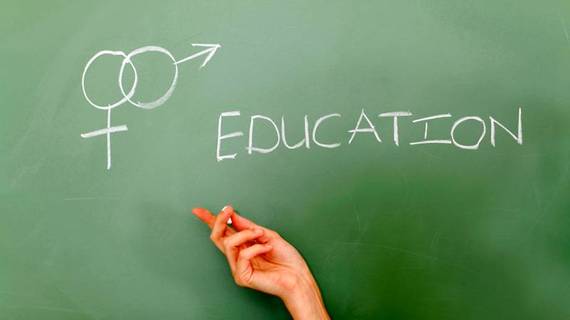 I recently watched an episode of Last Week Tonight With John Oliver in which he discusses the lack of proper sexual education in the States. In the episode, he shows a clip of Pam Stenzel, an abstinence-only educator who discusses how women are sexual temptresses who men should run from. While Pam Stenzel's "advice" is obviously ridiculous and harmful, I recognized her as the woman who appeared in "educational" videos shown in my high school's sex ed class.

When I was 14, I barely knew anything about sex. I didn't understand intercourse and did not know how a condom worked. I also did not really understand abortion, nor how birth control pills functioned. Although I had no plans to be sexually active, I was looking forward to putting a condom in a banana and understanding how things worked. However, what I encountered was completely different. I went to an all-girls Catholic high school, so it shouldn't be surprising that it was an abstinence-only class taught by a very nice woman who used to be a nun. While my classmates and I were taught about the dangers of STDs, we were told that condoms barely worked and that pills were not a reliable form of contraception. We were reminded that we could easily become pregnant and have to drop out of school. Of course, sexual relations between women were never discussed. It strictly focused on cis-heterosexual relationships.

However, I foolishly thought that my sex ed class was a bit progressive, considering that we were shown a video in class of a woman who resorted to aborting her child due to not having the financial means to take care of it. Unfortunately, that was the only realistic depiction of a reason why a woman would abort her child. We were shown pictures of aborted fetuses, along with a video of Pam Stenzel's speech in which she tells students that if they are not married, they cannot have sex. Stenzel also claims that birth control will make a woman more likely to get an STD than if she is not, claiming "This girl is going to end up sterile or dead!" While many of my classmates and I didn't follow the abstinence-only concept employed in our class, this was enough to make me feel uncomfortable about the notion of having sex.

Although one cannot expect much from a Catholic school, girls should receive proper, accurate information about sex instead of being scared into remaining abstinent. We are often told that if we have sex before marriage or without being in a long-term relationship, we are scum. I grew up being lost in terms of what a healthy sexual relationship was meant to be like. I was told that I couldn't wear shorts or a shirt that revealed my cleavage because it would allow men to think I was easy, or cause them to rape me. My mother often told me that I shouldn't kiss boys and let them touch me. However, I was going through puberty. It was impossible to not have any sexual desires or curiosities. It confused me to hear my male peers talk about their sexual desires, yet not being able to openly discuss it without being shamed for it.

My openness about my thoughts on sexuality made my male peers think I was easy and not worthy of respect. I went from being their friend and equal to being seen as a piece of meat. It was a strange thing to deal with. If I did anything with a guy, I was easy. If I didn't, I'd still be shamed and guys would make up rumors about me, as their attempt to ruin my reputation and salvage theirs. I noticed a pattern of the patriarchal idea that women were not supposed to enjoy sex, yet had to pleasure their men if they demanded it. I experienced a few instances in which men did not respect my consent, using abuse as a form of getting what they wanted. Unfortunately, some of my female peers experienced similar instances. The message was clear: men could enjoy sex, but women who enjoyed it were not worthy.

Despite the prevalence of the concept of purity in Latin culture, Latinas are portrayed in the media as being hyper-sexualized women whose sole purpose is to please men. While these characters are given the freedom to express their sexuality, their sexuality is typically used as the butt of the joke rather than expressed in a respectful manner, such as Gloria in Modern Family and Sofia in The League. This perpetuates the concept that Latinas who are open about their sexuality should not be respected, which can be quite harmful.

Many men are taught that if they want sex, they should get it. They are assured that their desires are important and their worth is determined by their conquests. Meanwhile, women are taught that their sexual desires are not important and unnatural. The concept of a woman being worthless if she is impure should be deemed as outdated and erroneous, yet is still prevalent in society. Sex is a natural, normal thing that is a part of human life. Nobody should be shamed for enjoying it. While I doubt things are much better for teenage girls in the island or in the US, I am glad that there are more resources online that help women and people become properly informed about important issues such as consent, the different types of contraception available, sex in non-heterosexual relationships and abortion.