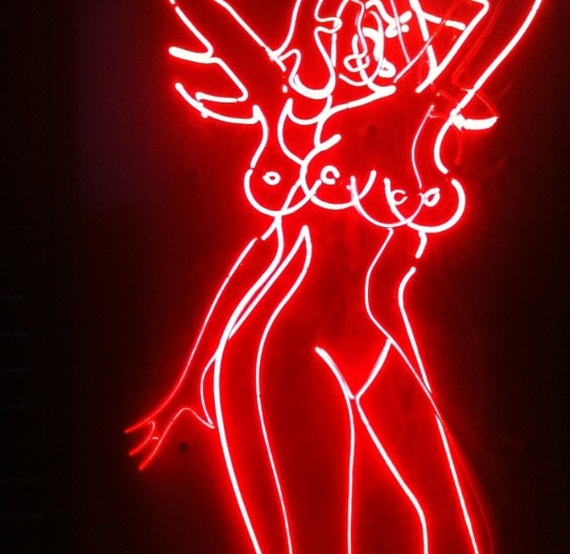 Prostitution dates back to the beginning of civilization, and today 15-20% of men in the U.S. admit to paying for sex at least once during their lifetime. And yet to buy and sell sex is illegal in the U.S. The sex trade is much more common than many people realize. There's a link between the sex trade and the current national conversation on mass incarceration. The out of control prison population and changing values surrounding drug use has set the stage for discussions of drug law reforms in the U.S. As a country, we've been talking about the war on drugs and decriminalizing marijuana and the effects of mass incarceration on black men in the U.S. and have begun to talk about the effects on women and other folks of color. But the majority of discussion in policy reform continues to center on drug laws while other laws based on moral code, like sex work, are often left out of the conversation.

The U.S. is home to 4% of the world's population, but contains 22% of the world's incarcerated population. While the "War on Drugs" did add to the growing rates of incarceration of young men of color, David Brooks emphasized in his Sept. 29th New York Times Op-Ed, it doesn't fully explain the growing numbers of Americans behind bars. According to Brooks, even if we released all of the people convicted of non-violent drug offenses, that is still only 15% of the prison population.

A rarely talked about point is that the U.S. is home to one-third of the world's female incarcerated population. The fastest growing population behind bars is black women. Prostitution is one of the few crimes where women are arrested more frequently than men, but prostitution alone does not explain the growing numbers of Black, Latino, and trans-women behind bars. If we are going to make reforms to crimes based on morality, we need to consider laws that disproportionately affect women, such as the prohibition of sex work.

Sex workers are often subject to the same "revolving door" punitive approach that people convicted of drug offenses receive; women do time, but never receive the resources, social, economic and, psychological support that would enable them to leave the industry if they choose. We don't often consider that sex work can be an intentional choice. Whether or not it is a symptom of poor economic conditions or volition it is always considered inherently immoral. This echoes the argument of feminists such as Katharine Mackinnon and Gloria Steinem--that sex work is never a choice. Mackinnon argues that men are always the buyers and women are always the sellers because the sex market is dominated by patriarchy and capitalism. Recently Steinem spoke out about sex work as "commercial rape" and "unlike any other work." This argument isn't useful because regardless of women's choice in the matter, under this system those who need resources, like housing and healthcare, are unable to access them.

A 2003 report from the Sex Workers Project found 87% of street-based New York City sex workers had unstable housing and 83% were affected by substance dependency. While city policy attempts to address this through mandating services like drug treatment with arrest, only half of those arrested had been offered services through their interactions with the police. Clearly, this is not effectively addressing the issue. In a parallel to the New Jim Crow of drug enforcement, the majority of New York City sex workers are women of color and many sex workers are subject to violent policing practices and racial discrimination. Black sex workers received higher fines and longer sentences than their white counterparts. When released from incarceration, their criminal records impede any attempt to secure alternative employment or housing.

The New York City Human Trafficking Court established in 2013 does its best to address the new perspectives on the world's oldest profession. The court is progressive in that it aims to connect women with resources as alternatives to punitive measures, but the majority of cases that are brought in front of the court are for low-level offenses like loitering with intent to engage in prostitution. Only a handful of human trafficking cases have been heard out of the hundreds of arrests since the courts conception. Many of the arrests for sex work hinge on the possession of condoms as evidence and fearing arrest workers choose not to use protection. What is clear is that this is not only a human rights issue, but also a public health issue and punitive measures are in fact making matters worse by treating all sex work, including low-level offenses, as human trafficking. This prevents women who are subjected to the criminal justice system from accessing services, engaging in harm reduction programs, and reporting sexual assaults.

In order to address this we need to widen the discussion to include issues that Black, Latino, and trans women are disproportionately affected by. The illegal purchasing of sex is ultimately what sustains the market and forces sex work underground. The stigma has to be removed around the discussion of sex work in order to protect the human rights and, as recently suggested by Amnesty International, the dignity of the women in it who often need access to housing and, health care. By decriminalizing both the buying and selling of sex we can focus our efforts on those who truly need assistance and making other avenues of employment available, especially for trans women.

Laws prohibiting sex work are based on a moral code that doesn't fully consider the implications. If we are going to reform non-violent crimes like drug use and selling that are founded on societal beliefs, we also need to consider other non-violent crimes, regardless of stigma and moral objections. The question of decriminalization or legalization cannot be limited to marijuana, but needs to be expanded to encompass sex work. We need to rethink the way we currently differentiate and treat between violent and non-violent persons convicted of offenses and push for decriminalization of sex work and the correlation to decreasing crimes against women; these progressive reforms normalize and regulate sex work rather than further stigmatizing and conflating an underground industry with human trafficking. With these efforts we can reduce sexual violence in the US, ameliorate conditions for a marginalized portion of the population, and destigmatize what is a reality for many women.

Rachel Katz
Rachel Katz is a social worker by day, DJ by night.