A majority of U.S. states don't mandate sex education, even though two-thirds of Americans think students should get comprehensive birth control information at school.

A Huffington Post poll in collaboration with YouGov revealed that most Americans -- both Democratic and Republican -- think school sex education classes should include information about various forms of contraception, instead of just abstinence. The poll of a nationally representative sample of about 1,000 adults was conducted in late December and early January:

State requirements on sex education don't seem to match the sentiments of most survey participants. Below are two maps showing state laws on sex education as of Jan. 1, according to the Guttmacher Institute, a nonprofit research organization that focuses on reproductive health. The first map shows that many states (shown in red) do not require sex education to be taught in schools. The second shows that sex education courses in many states must provide information on abstinence, but not contraception. 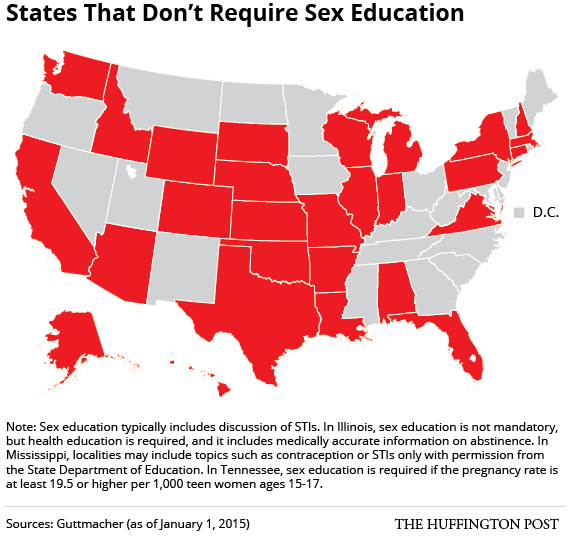 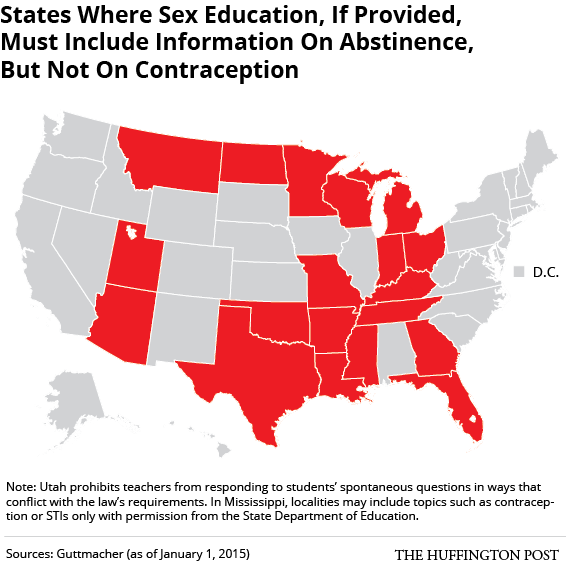 Across the board, most YouGov poll respondents said they thought students should be taught sex education starting at age 12. As of 2012, more than 70 percent of middle schools taught abstinence as the most effective way to avoid pregnancies and sexually transmitted diseases, while more than 30 percent taught about methods of contraception, according to the Guttmacher Institute.

Most YouGov respondents said they thought parents should have the ultimate say over the sex education their child receives. Indeed, as of Jan.1, 37 states required school districts to involve parents in sex education, and 35 states allow parents to opt their children out of such coursework, the Guttmacher Institute reported.

Listen Up, Legislators: People Want Better Sex Education Than What Many States Require
States With Best Educational Outcomes For Girls

1 / 25
25. Florida
Out of all 50 states, Florida has the 25th best educational outcomes for female students, according to a 2014 report from the Girl Scout Research Institute.
Wikimedia Commons