Going viral on Buzzfeed News, Northwestern Medical Ethics professor Alice Dreger, attended and live tweeted her teenage son's abstinence-based health class. She expressed her disgust and disbelief in the skewed information filling her son's and his peers' heads. She tweeted, "The whole lesson here is 'Sex is part of a terrible lifestyle. Drugs, unemployment, failure to finish school sex is part of the disaster."

In Tina Fey's Mean Girls, Coach Carr serves as a source of comedy because what he teaches in health class is simply ridiculous: "Don't have sex, because you will get pregnant and die!" Sadly, this approach to sex ed is a reality in some high schools. The battle between an abstinence-only versus a comprehensive sexual education curriculum has been a decades-long culture war.

One of the first manifestations began in 1974 with the Kanawha County, West Virginia textbook controversy. Alice Moore, the vocal anti-sex education Kanawha County School Board president, became outraged when previewing new textbooks that taught sexual education and evolution, among other things. Rural pastors spoke against the new books, urban religious leaders spoke for them, and after thousands of signatures on petitions and protesting parents keeping children home, the Kanawha School Board pulled the books from the high school curriculum.

Nearly forty years later, the culture war reared its head again in Kanawha County. In 2013, self-proclaimed sex educator Pam Stenzel spoke at an assembly in Charleston, WV where senior student body vice president Katelyn Campbell opted out of the assembly due to its religious nature. But following negative responses from the school community, she took it upon herself to publicize the nature of the lecture so that other students could choose whether to attend. West Virginia law requires that both sides of controversial issues must be presented to students. Campbell believed that the subject of Stenzel's presentation fell under I25. Following Campbell's protest, principal George Aulenbacher called Campbell into his office, castigated her, and threatened to call her college of choice, Wellesley College, to inform them of what he called her bad behavior. Campbell is still active in the fight for comprehensive sex-ed.

But who is Pam Stenzel? Stenzel tours the U.S. imparting abstinence-only, inaccurate information to high school teens. Said Stenzel, "If you have sex outside of one permanent, monogamous --monogamy does not mean one at a time, that means one partner who has only been with you-- ...you will pay. No one has EVER had more than one partner and not paid."


Is that you, Coach Carr?

Pam Stenzel explains that birth control prevents birth, which is true, but she also warns: "That drug, that hormone... has just made [that girl] ten times more likely to contract a disease than if she were not taking that drug. This girl could end up sterile or dead."

But the hormonal contraceptive is not the culprit; the lack of proper education about how it works is to blame. According to the Center for Disease Control, 53% of women between the ages 15 and 19 use oral contraceptives, and sterilization and death are practically unheard of. Teens might contract STDs because they aren't taught how to protect themselves. Birth control does not protect against STDs and condoms are not 100% effective, but a combination of the two methods --and open lines of communication with partners-- is the best tool for preventing STDs.

Stenzel replaces factual information with scare tactics and shame, rather than addressing the issue and working towards a solution. The American Sexual Health Association statistics show that, by age 25, one in two sexually active people will contract an STD.

The non-profit Advocates for Youth endorse comprehensive sex ed, saying, "Behavioral outcomes have included...increasing the use of condoms and contraception among sexually active participants...[and] lower STI and pregnancy rates." Advocates for Youth argues that abstinence-only educations are dangerous and ineffective: "[abstinence] Pledge-takers were less likely to seek STI testing and...use contraception when they did have sex."

Some fear that teenagers' access to contraceptives and learning comprehensive sex ed will inspire more sexual activity. But as sex therapist Dr. Gloria Brame explains, "No comprehensive sex ed = no reliable information on how STDs are transmitted and no understanding of how to prevent them."

For years, Massachusetts Planned Parenthood's and The Coalition for Choice's have pushed for a Healthy Youth law, requiring that any sex education be comprehensive. The bill has repeatedly failed to pass because it is seen as controversial. But such a law does not require public schools to teach sex education. Schools can still choose their own curricula as long as these contain "factual" information, even if it's abstinence-only and harmful to students' understanding. The National Conference of State Legislators reports that only 19 states of the 22 that require sexual education, require that sex education must be medically, factually and technically accurate. It's a scarily low number. 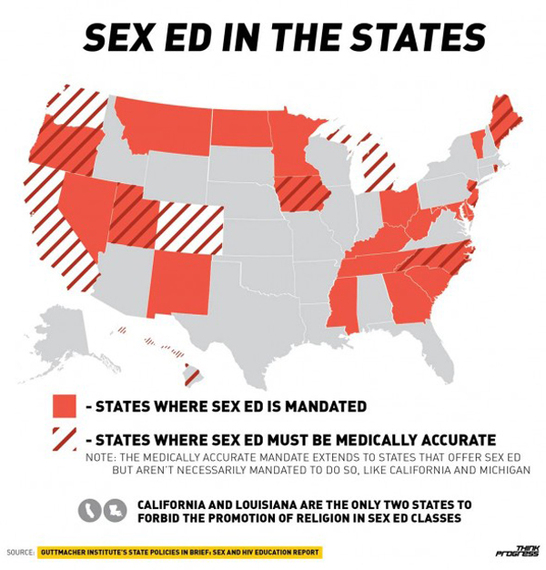 In my public school in Frederick County, Maryland, students were required to obtain parental permission before learning about sex at school. As a result, quite a few students got an extra hour of gym because their parents felt they "weren't old enough" or "weren't ready."

When are they going to be ready --after they give someone a 100% preventable disease?