Kundalini: It's not a pasta. The Sanskrit root of the word means coiled or spiral. The image of a snake piled on itself or two snakes rising is used to depict this reservoir of energy at the base of the spine.

Don't look for it on anatomical charts, though. It's not recognized by Western medicine. But growing numbers seek the raising of kundalini and many feel that the experience of kundalini in their bodies is as hard to miss as a hurricane.

The ideal result is variously described as union with the divine, one-ness with all being, super-consciousness.

I'm not one of the awakened, have only felt a blip--more on this later. Yet I'm in the camp of those who are pretty sure that "there's something to it." (Total disclosure: my novel Cobalt Blue is about an artist's turbulent kundalini awakening.)

I was fascinated to read recently the personal accounts that make up most of JJ Semple's new book, Biology of Consciousness: Case Studies in Kundalini. Semple defines kundalini as:

...A biological subsystem that remains inactive until summoned through meditation or other triggers that, once activated, send distilled sexual energy to the brain via the sexual sublimation process.

A Hurricane of Energy

The awakening accounts are dramatic. From Vikram G.:

One day, at the culmination of the sexual act with my wife, and while the (Indian classical) music was playing, I heard a cracking noise at the base of my spine. It was the most intense orgasm in my life; something ran through my entire being and it overwhelmed me...

I 'saw' ...everything as vibrations. The music, the streams of water, the glimmering light from the bulb above me. 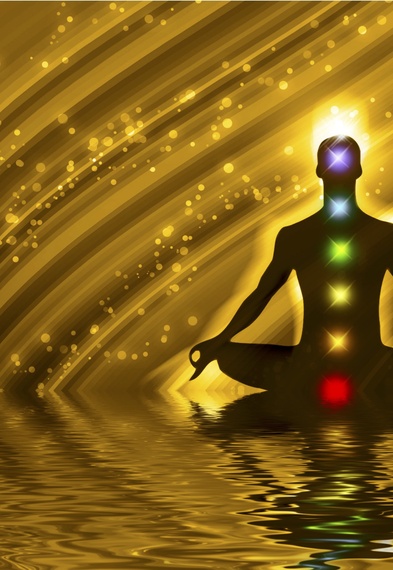 ...I felt an energy rise up from within me, and I began to shake. Not an abnormal condition or convulsion, but a physical energy rocking my whole body.

Triggers cited include meditation, yoga, sexual activity, psychedelics, and the trance of making art. There are many reports as well of spontaneous uprising.

Barbara Hand Clow, author of Astrology and the Rising of Kundalini, suggests that mid-life crisis is a peak time for such experiences.

Kundalini yoga is many Westerners' introduction to the term. This practice, and arguably all physical practice of yoga, is designed to rouse consciousness to its highest potential through raising kundalini energy. I wonder whether most of those who attend kundalini yoga classes know this.

Similar concepts appear in many traditions. Chi is probably the best known example; originating in China's oldest religions, it refers to energy that permeates everything.

However, big problems are also cited, sometimes under the umbrella term of kundalini syndrome. Many say they've suffered extreme sensitivity to light and sound. A therapist specializing in such problems, Tara Springett writes:

...Typical physical symptoms are head pressure, pain in the heart area, sexual over-arousal, shaking and sensations of tingling and pulsating anywhere in the body. While all these symptoms are essentially harmless they can be very painful, frightening and uncomfortable.

In his now-classic autobiographical Living with Kundalini, Gopi Krishna reported a long ordeal with mood swings, painful sensations of heat, and eating disorders.

I seemed to have touched accidentally the lever of an unknown mechanism, hidden in the extremely intricate and yet unexplored nervous structure in the body, releasing a hitherto pent-up torrent which, impinging upon the auditory and optic regions, created the sensation of roaring sounds and weirdly moving lights, introducing an entirely new and unexpected feature into the normal working of the mind that gave to all my thoughts and actions the semblance of unreality and abnormality.

Carl Jung warned of kundalini yoga in his introduction to The Tibetan Book of the Dead:

It is a meddling with Fate, which strikes at the very roots of human existence and can let loose a flood of sufferings of which no sane person ever dreamed.

When I was well into writing Cobalt Blue, my psychologist husband said, "This isn't something you're seeking, is it?" No, not just now, thanks; though I do meditate daily. I'm currently enjoying a pleasant plateau in personal growth and don't mind lingering here longer. But to my surprise, I discovered only recently a paragraph in the journal I kept during my three months in India researching my novel Sister India. I'd been walking through the site of an ancient observatory in Delhi, had just seen one of the cliched images of India in the West, a snake rising out of a basket.

I kept noticing a sensation I have felt here before, a small physical thrill that I cannot explain. It comes from simply looking around me. It's like an electric pulse, made of molten color, the brilliance of all the silk saris at once; and it pushes past my fatigue and travels along the wire that hooks together body and soul. Jet-lagged and short of sleep as I was, that jolt kept pushing through, grabbing my attention. I welcome it. It's somehow part of what I've come here for.

That was more than 20 years ago, I'd completely forgotten the moment and to my knowledge nothing more came of it, unless you count my obsessively and unwittingly writing a novel on the subject. I'd finished several drafts of the book before the phrase "it's kundalini" popped into my mind. I didn't know then what the word meant. I'd overheard it once at a party. When it appeared in my head one rainy night as I sat alone on my porch, I looked it up and realized it was the subject of the story I'd already written.

There's also a big-picture aspect to kundalini, beyond the potential of the individual. More than one writer on the subject has referred to kundalini energy as the engine of coming human evolution, the force that can make us a higher order of beings. If so, we have an amazing ride ahead.

(Peggy Payne's novel Cobalt Blue won a 2014 IPPY for Visionary Fiction. Her Sister India was a New York Times Notable Book of the Year. She writes here and on her blog about the intersection of sex and spirituality. Visit www.peggypayne.com