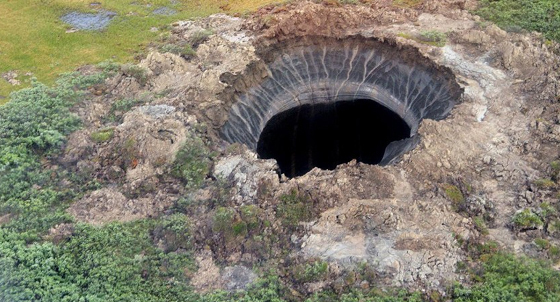 With all the recent stories and photos of huge methane-caused holes running deep into the Earth, suddenly appearing in a part of Siberia whose name means 'the end of the world', one might be forgiven for imagining a fun new sci-fi subgenre, the "Methane Thriller." But no: this is serious, and unexpected observations concerning the stability of Arctic methane stores, even globally trivial ones, should bring us back to a vastly more important public conversation from last year.

A Nature Comment (Whiteman, Cope, and Wadhams, 2013) concerning potentially huge economic consequences from large-scale Arctic methane releases, explored a scenario in which 50 gigatons (50 billion tons) of methane from hydrate (methane in a cage of ice) were released over a decade from the Siberian shelf (an enormous amount compared to anything known in many millions of years, but initially suggested in 2008 by leading specialists on this shelf's methane), suggesting this would cost about $60 trillion, generating considerable coverage and controversy. So where does that debate stand?

"To be credible, risk scenarios need to be factually based and rooted on ongoing observations." With that biting close, a group of fifteen scientists (Nisbet et al, 2013), including some of the world's leading methane experts, had appeared to dash all credibility from the Nature Comment, almost treating it as though it were one of my imaginative new methane thrillers. Although it followed by just one month non-specific but worrying news from NASA's CARVE which suggested why the absence of methane feedbacks from the models used for the newest IPCC report had been extremely unwise, the poorly reported debate over the Whiteman Nature Comment ironically spread the false impression that gigaton-scale methane releases coming anytime soon had now been debunked.

I found this to be a jaw-dropping moment: not because of the facts in question, but the fiction. The fiction? Yes. The surprising fact, you see, is that one of the primary authors of that very rebuttal had, under a pseudonym, published a work of fiction, a thriller based on a scenario of large-scale Arctic methane release coming from an earthquake and subsequent submarine landslide, a Kindle edition of which was released six months after this rebuttal, earlier this year.

"This is enormous. Monstrous amounts of old carbon must have erupted out of the ground. The gas release must be in the gigatons."

This is the where the debate stands. In the methane expert's secret novel, Planetquake, a comparatively modest amount of methane reaches the atmosphere - only about 1 gigaton, although you might assume, like leading methane expert David Archer had, that this would be the result from about 5 gigatons getting released into the water column at the depths involved, so about 10% of that in Whiteman et al - yet even this amount is depicted as causing an enormous amount of economic havoc and human suffering, shaking global society.

Further, Planetquake underscored something easily lost in the debate. A sudden geological event like a submarine landslide is quite a messy physical process: just as our CO2 emissions don't come out as pure CO2, any methane coming from a landslip wouldn't either. In Planetquake's erudite scenario, after causing an immense tsunami, its submarine landslide, closely modeled on the famous Storrega slide 8,000 years ago, releases not only its methane, but also a lot of brine from the sea floor. Surprisingly, this brine plays a significant role in what develops: because of the size of the methane burp, a large quantity rises directly to the Arctic stratosphere, and the brine it brings with it contains various halogen compounds - methyl bromide, methyl iodide, various chlorine compounds - spelling a toxic brew for stratospheric ozone there, and leaving a hole beneath which crops and forests wither (it takes place in spring). Warmer temperatures follow from the methane, with predictable results - fires, hence elevated carbon monoxide and tropospheric ozone, hence more crop damages, etc. A global food crisis ensues, then regional nuclear conflict and finally global pandemonium.

In short, in Planetquake, one of the key authors of a rebuttal interpreted by many as "debunking" near-term risks from methane release, carefully builds a credible scenario on just such risks. It is perhaps the first real "Methane Thriller," was written by a leading scientist with highly relevant expertise, and in it just one sudden extra gigaton of methane (only about 2.5 years of current human emissions), given the amplifying effects of geopolitical havoc, probably costs much of that $60 trillion. Whatever its literary qualities (it becomes quite a potboiler, though more filled with lies than sex, as it is seemingly pitched towards the religious right), anyone interested in contemplating the risks of abrupt climate disruption from Arctic methane might wish to look at it.

This past spring a series of modest earthquakes took place right where Planetquake has its quake(s) and landslide originate, around a fault running between Greenland and Spitsbergen. The ones in the novel and those that caused the Storrega slide(s) (the other side of Spitsbergen, off Norway), even the minor ones this spring, have all been attributed to "isostatic rebound," the Earth bouncing up from lessening of its load of ice, something sure to kick up more, with ice losses from nearby Greenland already up something like ten times from just twenty years ago. The Planetquake scenario clearly has "credibility," in that the author simply recreated the most recent known such methane burst, only 8,000 years ago. To compare this to the credibility of Whiteman's Nature paper, remember that to match the key climatic feature today - current CO2 levels - we have to go back 600-1,800 times further!

Thus, it becomes quite credible to expect a strange black hole or two to suddenly appear, even if such a thing has never been observed, once the relevant dynamics are understood and appropriate changes observed. Whiteman et al was about the economics, but the criticisms were about its scientific scenario, and were mostly rhetorical, as I will show later. And just since the Whiteman Nature Comment, science has suggested an even more drastic suddenness with which past methane outbursts might have occurred, as we shall see. Planetquake:

He kept on googling. He came up with a new set of files. They
were about Arctic methane.
"Methane," he grunted. "Methane. That's the worry. CO2 is a
Snark. Dangerous, but we can hunt that. But methane's a Boojum.
Remember the PETM."
"PETM??" Connie asked
"Paleocene-Eocene Thermal Maximum?" Ash muttered.

In Part II, I will further explore the "credibility" of Whiteman's methane scenario, which originates on the opposite side of the Arctic from Planetquake's, and how we should consider and respond to such risks. Planetquake:

"The gas release must be in the gigatons."

"The world's in trouble."