Where do Americans buy the most sex toys per capita? According to a new infographic created by the adult toy manufacturer Adam & Eve, not in the places you might think.

Instead of locales like New York and California, which are known for their more liberal attitudes toward sex, the states with the most sex toy purchases per person, at least according to the data Adam & Eve pulled, are those generally considered socially conservative. (Click through the slideshow below to find out which state came in first.) The top states also happen to be sparsely populated. As the infographic cheesily summarizes the results, "Low population states for the win! It must get awfully lonely there..."

The company also found that Americans spend $15 billion on sex toys annually, that 44 percent of women 18 to 60 have used one, and that 78 percent of those women were in a relationship when they did.

This data is based in part on Adam & Eve's internal research, so we can't verify it or know how accurate it is. What we do know is that the infographic recycles a lot of worn-out myths about women and sex.

View the full infographic at AdamandEve.com.

Let's take it from the top. Sex toys are about as "scandalous" as online dating is these days. Then look at how the company frames the data on how many women use sex toys: "If she doesn't admit it, there's a pretty good chance she's lying.." Raise your hand if you didn't need to be told (again) that women don't say what they really want in bed, and are maybe even deliberately dishonest about it.

Further down, the infographic that introduces the percentage of women in relationships who use sex toys with the headline: "Can't get no satisfaction." So women with significant others only use sex toys if they aren't getting what they want from sex with their partners? What about the couples who use sex toys to enhance their sex lives? Or the fact that sexologists encourage them to? Then check out the recap below the infographic on the company's website. It poses the leading question, "Does this boom in popularity mean that single career women are simply choosing sex toys over time-consuming relationships?" thereby resurrecting that fearsome straw (wo)man, the single female married to her job who prefers her vibrator to men and thus threatens to undermine civilization as we know it.

Fortunately, Adam & Eve assures us, the single career woman is behaving herself. It's married women who are buying up the sex toys -- at twice the rate of single women, in fact. You know, because they "can't get no satisfaction."

LOOK: The States With The Most Sex Toys Per Capita Are ... 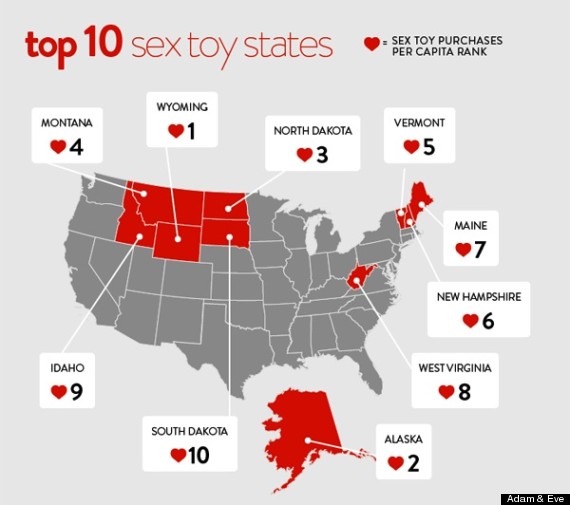