WASHINGTON -- With one week to go before the 2015 Major League Baseball All-Star game in Cincinnati, nonprofits there are employing an unusual item to help them reach out to potential victims of sex trafficking: hotel soap.

The game next Tuesday is expected to draw more than 40,000 fans to downtown Cincinnati. Ahead of a predicted spike in the number of sex workers who likely will be trafficked into town to meet elevated demand, more than 15,000 bars of hotel soap specially labeled with a help message are being distributed to hotels and motels around the city.

Major sporting events like the Super Bowl and the All-Star Game have long been known to produce temporary spikes in prostitution during the days before and after the game, as out-of-town visitors, some fueled by alcohol and adrenaline, swell the local market for sex work.

In Cincinnati, the soaps being distributed are outfitted with a red tag that reads:

"Are you being forced to do anything you don't want to do? Have you been threatened if you try to leave? Have you witnessed young girls being prostituted? If so, please call: 1-888-373-7888 National Human Trafficking Hotline."

For victims of sex trafficking, many of whom labor as prisoners of their pimps or "managers," the shower in a hotel room may be the only time they are left unsupervised, making it an ideal time to reach out to them. According to the Cincinnati Enquirer, several area hotels are considering whether to distribute the soaps, with at least one Holiday Inn saying housekeepers will likely place the bars in guest rooms. The soaps are being provided by a nonprofit called Save Our Adolescents from Prostitution, founded by a survivor of sex trafficking. 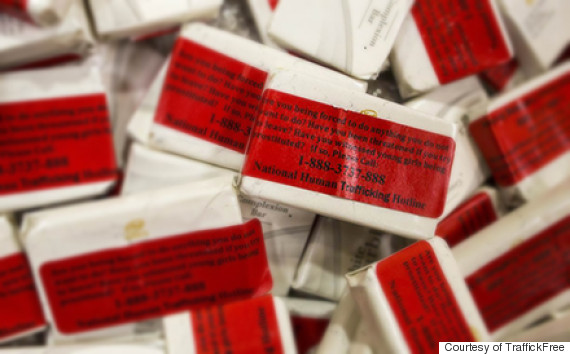 Above: The type of soaps being distributed to Cincinnati hotels to help reach trafficking victims ahead of the July 14 Major League Baseball All Star Game.

Items like the hotel soaps will help to boost efforts already underway by Ohio law enforcement, aimed at cracking down on sex traffickers during the week of the All Star Game. The Cincinnati Fire Department has set up its own hotline for victims, 513-564-CALL, which will be manned 24 hours a day for the next two weeks.

It's difficult to estimate how many individuals in the United States are trafficked for sex every year, but in 2014 the National Human Trafficking Resource Center received more than 20,000 calls about suspected trafficking cases.

In recent years, much of that business has gone online, in the form of anonymous ads promoting "escorts," "massage parlors" and "adult services," all of them euphemisms for sex workers. The online sex market is dominated by one website, Backpage.com, which hosts more ads for sexual services than any other comparable site. In April of this year alone, Backpage.com ran 1.4 million ads for adult services in the U.S., according to the Cook County Sheriff's Department in Chicago.

But there may be good news on the horizon for U.S. victims of online sex trafficking. Last week, the nation's two largest credit card companies, Visa and Mastercard, both announced they would no longer process payments to Backpage.com. The move raises major questions about how Backpage will collect the money it charges for these "adult services" ads, more than $100 million a year in the United States, by some estimates.

A spokesman for Backpage.com could not be located on Tuesday, and company listings did not contain a phone number. Backpage.com is headquartered in the Netherlands, but maintains a U.S. postal address in Dallas.

Above: Some of the images posted to Backpage.com in Cincinnati on July 7.

As of Tuesday, Backpage.com still appeared to be processing credit card payments, but a spokesman for Mastercard told USA Today that it is in the process of "terminating acceptance at this time."

Advocates for victims of trafficking applauded the Visa and Mastercard decisions, but cautioned that it remains to be seen how Backpage.com, and the sex trafficking industry, will respond.

"We're still learning about what the impact of the announcements will be, and how it will actually impact people trying to post these ads," said Bradley Myles, CEO of Polaris, a Washington, D.C.-based anti-trafficking group. "There's a recognition among many actors in the field that the ads will likely migrate, either to other parts of Backpage or to other sites where escorts are sold."

Still, he said, "it was essential that Visa and Mastercard took this action, because of the sheer leverage that they exert over the payment industry."

By disrupting the pimps and traffickers who pay to market individual sex workers on Backpage.com, Myles said, the credit card companies are part of a broader paradigm shift underway nationwide. "Law enforcement officers are shifting their attention and resources more towards traffickers, pimps and sex buyers -- the 'abuse actors' in the sex trade -- and away from the women and girls, men and boys, who are directly selling sex," he said. "This action is one of the indicators that this shift is happening."

If you or someone you know is a victim of trafficking, or you would like to report a tip of suspected human trafficking, please call the National Human Trafficking Resource Center at 1-888-373-7888.