Last week the American Himalayan Foundation (AHF) hosted a beautiful dinner at the Four Seasons in San Francisco to support its "Stop Girl Trafficking" program. The three keynote speakers were Jon Krakauer, mountain climber and bestselling author of Into the Wild and Into Thin Air; Siddharth Kara, Harvard Fellow and author of Sex Trafficking: Inside the Business of Modern Slavery; and Dr. Aruna Uprenty, AHF's on-the-ground "visionary partner" in Nepal, the founder of this program. They each spoke about the issue of girl trafficking and the best solution to stopping it: the education of Nepalese girls. 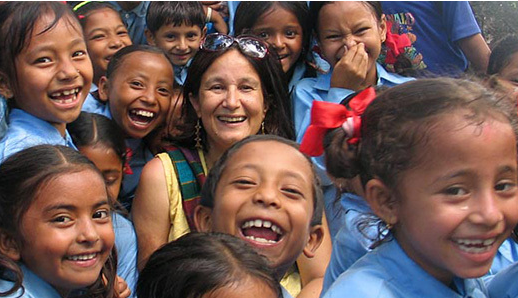 The indomitable Dr. Aruna Uprety, champion of AHF's anti-trafficking efforts, with a few of her friends. Permission courtesy of Eileen Moncoeur.

Every year, around 20,000 girls are taken from their homes in Nepal and transported to India and the Middle East to work as slaves. Of these 20,000, it is estimated that 12,000 to 15,000 end up as prostitutes in Indian brothels. If a girl tries to fight, refuse or run, she is burned with cigarettes, beaten, abused and threatened. Some of these girls are as young as nine years old.

Poor, indebted Nepalese parents see their daughters as a liability. If their poverty reaches a point where they can no longer feed their children, it's tragic but common practice to sell a daughter for as little as $200 to a broker who will take her to India, where demand is supposedly high for house servants to wash dishes and clean toilets. For struggling families whose daughters don't have a bright future in Nepal, this can sound like a reasonable choice. Their daughters will end up in households in India, presumably under the safeguard of the families they are sent to work for. But little do the parents know, or want to know, that they are actually giving their daughters away to become enslaved prostitutes. These girls are generally taken to cities far away, like Mumbai, Chennai and Bangalore, where they do not speak the language and no one can understand them except for other abducted girls from Nepal. These are young children, with no recourse to defend themselves.

In India, there is a myth that sleeping with a young girl is an antidote for HIV/AIDS. Because of this, very young Nepali girls are a sought after commodity, and the tragic result is that over 60 percent of the abducted Nepali girls are essentially used as sacrifices and infected with HIV/AIDs. According to a Human Rights Watch study, in 1995, it was estimated that of the 100,000 sex trade workers living in Mumbai, 50,000 were from Nepal.

While sex trafficking is technically illegal in both Nepal and India, it easily goes undetected and unenforced. The border between these two countries is open and Indians and Nepalis are free to come and go, no questions asked. Most of the girls who leave go willingly, often because they are told they are traveling to jobs in wealthier foreign countries (like Lebanon or the United Arab Emirates) or they are told they are going to meet an Indian husband in an arranged marriage. Some of the girls are drugged and have no idea what is happening, only to wake up on a train or a bus headed for an Indian brothel.

Indian abductors prey upon families from rural villages who are extremely poor, uneducated and lower caste. In economic desperation, these families willingly sell their daughters. Perhaps most disturbingly, both governments and police are often complicit in the abductions, accepting bribes to look the other way. There are occasional police raids on brothels in India and there are both Indian and Nepali NGO rescue agencies which help return Nepali girls from far-flung Indian cities back to Nepal. But for many of the kidnapped girls it is too late; they refuse to go home because they know they will be stigmatized and ostracized. Even if a girl is rescued and returns to Nepal, she is generally detained like a criminal until her family picks her up (which they often never do). She is forced to have a medical exam, and if she is HIV positive, she is stigmatized. For the few who make it back to their villages, they are summarily abandoned and shunned by family for bringing shame upon them.

The most effective approach to stopping this sex trade trafficking is to prevent it in the first place, which requires a huge cultural shift, and that starts with education. Like so many third world epidemics, the root causes of sex trafficking are lack of education, poverty and indebtedness. American Himalayan Foundation's Stop Girl Trafficking program is one of the most effective ways to end this horrible practice of flesh trade. The AHF program is built on a very simple premise: target the most likely areas where traffickers prey, put the girls in school, and educate them and their families about sex trafficking. The traffickers steer clear of villages where they know such programs exist and continue to prey on the more ignorant pockets.

Through AHF and Dr. Uprety's efforts this year, Stop Girl Trafficking has supported 9,500 girls in 400 schools across Nepal, and not one girl has been lost to trafficking. For more information about The Stop Girl Trafficking project and ways you can contribute, visit The American Himalayan Foundation website.