Recently I was contacted by an organization seeking feedback from survivors regarding a sex trafficking bill. I often advocate that any anti-trafficking efforts should include feedback from survivors, and I'm grateful they reached out to me as well as other survivors. One of the main points of this particular bill was that it would require any person convicted of sex trafficking youth to register as a sex offender. This sounds like a no-brainer, right?

Well...maybe not. When I first began anti-trafficking advocacy in 2009, I believed any person convicted of human trafficking should face mandatory sentences, including registration as a sex offender if the offense involved sex trafficking minors. However, after reading multiple cases, I've since changed my mind. I now believe that each case should be judged on an individual basis. And, if you read Wendy Barnes' recently released memoir, And Life Continues: Sex Trafficking and My Journey to Freedom, I think you might agree or at least be open to the debate. 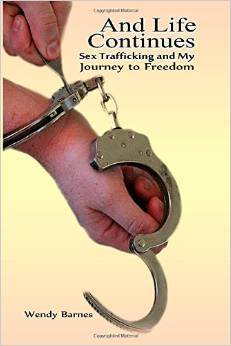 Wendy Barnes was 15 years old the first time she met Greg, a sixteen-year-old high school junior who would ultimately become the father of her three children and force her to accept a life in prostitution for 12 years. "All I wanted was to be loved," writes Wendy in a personal email. "I wanted to be special to someone."

Wendy grew up in what she calls a "pretty average" home life. She writes: "Considering that 'average' is the biggest bulk between horrible and great. We were poor, the 'working poor.'" Wendy says she was "picked on" by peers and her older brother while in grade school. "I had red hair and freckles and the neighborhood kids were [bullies]...I was quiet and mostly a loner."

With both of her parents working full-time, Wendy says they were preoccupied. "I had no one to 'run to' and hold me when my brother would pick on me and neighborhood kids would tease me. I had no one to comfort me." Wendy's parents divorced when she was eight, forcing her mom to work two jobs. "My father moved away and married another woman who had 3 kids of her own," she writes. "My Dad put me on the back burner to his new wife and kids. Not like he didn't try at all, but I would mostly say that because of the way my Dad was raised, it turned him into the father he became. 'Children are to be seen and not heard' [was his way of thinking]."

"They did the best they could with the lack of parenting skills they each had," Wendy continued. In her memoir, And Life Continues, Wendy describes a childhood in which she sought love and approval but often experienced feelings of isolation and disapproval. "[My mom] was a yeller," Wendy says. "She would scream over every little thing. I took her screaming very personally. She was good at giving guilt trips. She wanted to be a good parent. She tried to show us love, but she had her own personal issues and demons which made it difficult for her."

Life then took a turn for the worse when Wendy turned 11 years old.

"[My] Mom started dating a guy who started sexually abusing me," she writes. "The experience broke what little tiny sense of self that I had and I learned to hide 'me'...Although people could see me, touch me, tease me, I hid my true self in the pit of my stomach." Later, Wendy disclosed the abuse to a counselor, but by then the abuser and her mother had married. Despite a court order banning contact between Wendy and her stepfather, Wendy's mother moved both of her children back into the man's home.

As Wendy entered adolescence, she attempted suicide more than once. "[These were all attempts] to rid the world, my family, my mom and dad from the horrible burden I [thought I] had become," Wendy writes. "I felt that it was all my fault, that my mom had to work two jobs. I thought it was all my fault that everyone was not happy. I felt like a disease and only by my death would the world be rid of this disease." This was part of the foundation of Wendy's childhood, and then she met Greg in middle school. In her memoir, she writes:

Every girl at the party noticed Greg, and almost all them were hanging around, gawking at him...Greg didn't know that I existed, but that didn't stop me from dreaming of him at night. Looking back, I don't really know why I was so attracted to him. Maybe that's just a rite of passage when you're 15, to secretly fall in love with the popular guy at school, knowing he would never like you in return.

Later in the school year, Greg did notice Wendy. They began a relationship that Wendy was unable to see as unhealthy and exploitative. By 16, Wendy was pregnant; and, by 17, she was trapped in a relationship that had become violent and manipulative. Before she turned 18, Greg isolated Wendy from her family and ordered her into prostitution, using their child as a tool for coercion. In her memoir, Wendy describes the scene -- she is broke, living in a shelter with her infant daughter, Latasha, and waiting for Greg to follow through on his promises:

After a short pause [Greg] started to speak. "I know of a way we can make some money...What are you willing to do for Latasha? How much do you love her?" [he asked me.]

It was such an unexpected question. It was hard to imagine what he was going to suggest. This job must be pretty bad, maybe even picking up garbage on the sides of the streets, I thought -- but I was more than willing to do even that. All I wanted was for Latasha to be loved and to have the good life she deserved...

Greg wasn't giving me answers -- just questions that weren't making sense to me.

"I know how we can get diapers and formula. You just have to believe in me and trust me. Do you believe in me, Wendy? Do you trust me?"

Greg instructed Wendy to prostitute. Despite feeling confused and afraid, Wendy conceded. Afterward she writes "my soul was completely empty." Over the next 12 years, Greg continued to prostitute Wendy while gaining control over multiple other victims, including minors. In the end, Wendy was so fearful and emotionally broken that she was unable not only to advocate for herself but unable to advocate for others.

The words were a knife to my heart...I choked on the thought. A sex offender is my step-father...a sex offender is a horrible person who does horrible things to helpless children. I felt hopeless, knowing that I would be labeled a monster and knowing I couldn't do anything about it...all I wanted was to wake up from this horrifying nightmare.

So, here's the question...should Wendy have been held accountable for minors who were trafficked for commercial sex under Greg's control? And if so, then to what degree? Does Wendy's lack of action equal Greg's actions? Should Wendy have been sentenced as a sex offender? If so, should there have been an expiration date based on graduation from the program and presumed rehabilitation? Should Wendy have lost access to her own children? These are important questions to consider, especially as legislators and anti-trafficking advocates across the country push for mandatory sentences against perpetrators, including perpetrators whose actions (or lack of actions) may have been committed under force, fraud, or coercion.

I realize this is a complex issue, but if you're working to protect victims of sex trafficking then you must hear the perspectives of all victims. I encourage you to read Wendy's memoir not only to gain insight into the life of a victim of sex trafficking but to gain insight into the mindset of a victim who is arrested and convicted of charges related to sex trafficking minors. You'll find that Wendy is not looking for pity. Even as a victim, Wendy says that being held accountable was crucial. She believes her prison sentence was not only appropriate but necessary to release her from Greg's brainwashing. She was fortunate to have had access to what she describes as an excellent in-prison program and compassionate corrections counselors and probation officers. She points out, however, that such programs are rarely available to victims/offenders.

Despite the success she experienced from this program, Wendy says the court-mandated registration as a sex offender created the biggest obstacle to her rebuilding her life. My hope is that, after reading And Life Continues, you will agree that each offender convicted of sex trafficking must be judged on an individual basis with customized sentences. Yes, all perpetrators must be held accountable; however, all perpetrators are not equal and should not be prosecuted equally. Wendy's story demonstrates that an appropriate sentence, an effective program and counseling, and a second chance at a new life is not only necessary and fair but is in society's best interest. Wendy is now an author and national advocate for victims and survivors of sex trafficking.