"Would you like me to tell you the difference between making love to an Egyptian woman and a European woman?" "Mike", my driver in Luxor, leaned forward and gazed sincerely in my eyes. "Look, I think it is important to be able to discuss these things."

"Mike", an Egyptian who had lived in the English countryside for ten years--as a mechanic-- had just returned to his native Luxor two years ago, and claimed to have firsthand experience. To begin with, his name was not "Mike", but Mohammed: he had changed his name in England when he noticed that if he was in a bar, and a mate called out, "Hey Mohammed!", everyone in the pub looked at him funny.

It was in a pub he had begun to have his experience with European woman.

"This British lady, she just comes up to me, and we talk and she invites me back to coffee at her flat. You know, I think it's going to be coffee," Mike says earnestly, the sun setting in the desert hills behind him, with the Valley of the Kings just beyond. "Well, we come back, and it's no coffee!--but more drinks--and she comes close to me and starts touching me, and says she likes me."

"Well, I explain to her that in Egypt, we don't use this system of coffee. You know, it's the system in England, asking for coffee, because it's considered vulgar to ask for sex."

"Oh, we slept together. It is British women who taught me the idea of giving pleasure." His voice raised in enthusiasm as he pointed a finger at his forehead. "One woman taught me how to use your mind to control yourself--she said, look, just concentrate!--so you don't have an orgasm in two minutes. Now, I can resist for about an hour."

Mohammed/Mike suddenly looked downcast. "They're all circumcised here, so when you sleep with a woman, it's like sleeping with a piece of wood. They're cold."

"They're ALL circumsized here?"

"All? These millions of women? I thought it was now illegal!"

"Two years ago, it became illegal. But all the women--trust me--l00 percent of them are circumcised. Rich, poor, every woman. I tell myself I should never have left Egypt. Then I wouldn't know the difference. The men here, they are satisfied. They have sex for two minutes, just to relieve themselves, and the women lie like boards. My brothers, for them it's like that. What do they know? They're farmers. They have never slept with tourists."

Mike shrugged over his beer. "I am lonely here. I spend the day with tourists to pass the time. Like with you, we had a chance to talk, and so we passed the time. And I will never again marry again. I'll just have an affair here and there, that's it."

He had been married, he had told me, for two weeks in an arranged marriage--as are most in Egypt, he explained. The marriage lasted two weeks. Leaving him one son he never saw.

"She was a board," he said. "That's why the marriage failed. The problem was that I had known European women. I had known what it is like to have sex with a woman who has pleasure, and it's such a difference. Egyptian women don't feel anything!"

He stared at me across the table mournfully. "We have killed our women."

"And your sisters, they are circumcised too?"

"How do they bear it with their husbands?"

"They use lubricant. And they just do it to care for their husband, and it only lasts two minutes. Some of them try to act; they say Ooooh, ahhhh, oooh. It is painful for them."

"Even your little sister is circumcised?"

"Yes, what could I do!" He gestured with his hands, bringing his thumb and forefinger close together. "They cut it off--that little thing between women's legs--when they are two years old. My parents did it. They did not know any better."

"But you just told me there is a sex trade in Cairo, with Saudi Arabians coming in for Egyptian prostitutes. Are the prostitutes also all circumscribed?"

"They're Egyptian women! Of course they are. I am sure, however, that they too say, 'oooh, ahhh, ahhh."

Mike dropped me off at my hotel, first telling me about an Australian girl he had met two months ago, with whom he had had the opportunity to spend the night.

Official Egyptian statistics say 97 percent of women aged 15 to 49,
Christians and Muslims alike, have undergone what the UN prefers to call
female genital mutilation, or FGM. 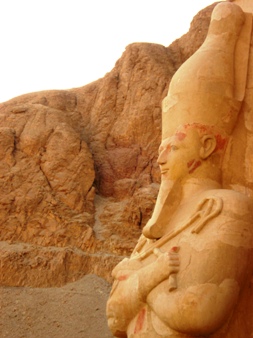 Editor's Note: A reader, who identifies herself as an Egyptian woman, wrote to our editors to dispute Ms. Badt's claim that 97% of Egyptian women aged 15-49 have had their genitals mutilated. Though the practice is technically illegal (both the government and religious authorities prohibit it), this Reuters article says 'more than 95%' of Egyptian women are circumcised and this one from BBC puts the figure at 90%.

Karin Badt
Associate Professor of Cinema and Theater in Paris