Over the holidays I was toasted by someone I respect a lot. He congratulated me and Lin on our impending parenthood and said that we'd soon encounter a kind of love we didn't even know was possible.

Until joining the pre-parent club, I'd never heard it put precisely that way. It came almost as a sympathetic warning, that the love we'd feel for our children would be seismic in its impact. It goes a good step beyond what we've all heard so often: that the second you see them, you fall in love, and everything shifts. Expect a flood, I thought.

I wonder exactly how I'll feel when our twins arrive, most likely in June, with the help of our surrogate, Jeanne. But speculation is no doubt a useless exercise; it will be whatever it'll be, and it will likely elude adequate description anyway, but as someone drawn to emotional topography, it's a like sack of catnip to gleefully bat about.

You see, surrogacy busywork mires you down early in the process -- in my case, enough that at times I could scarcely envision the Pack 'n Play at the end of the rainbow. Now, with a baby shower in the works and a deepening compulsion to ogle every stroller that happens by, concrete reality is finally emerging, and with it the luxury of imagining what my interior life as a father will be like.

But for the most part, we do a lot of waiting these days. With much of the mystery that's amply afforded early in the process now over and done, Lin and I have settled into a rhythm of quotidian anticipation, content in the no-news-is-good-news sense, while greedily ingesting what nuggets of new information come our way. But a few days ago we finally discovered the sex of the twins, a definite red-letter day.

I always imagined our kid as a boy when we started all this, without thinking or analyzing or even realizing it at first. It was just a bouncing baby "he" dancing in my head. And even after talking about it with Lin and grasping my subconscious partiality, I copped to a slight preference for a boy. It's what I know, after all.

That all got turned on its head when it hit us just how many of our friends are women who are close enough with us to be our sisters, how much inspiration we draw from them, and how cool it would be to raise a girl with their help and advice. With that we arrived honestly at the we-don't-care-as-long-as-the-baby-is-healthy camp. And then it was twins.

Perhaps we'd have one of each? After all, two men raising twin boys is, as a friend in California noted, "hella dudes." And Lin and I raising two girls seemed like the artistically shaky yet marketable premise of a situation comedy; Two Men and Two Little Ladies, they'd call it.

I snuffed out the 5:20 a.m. alarm on the morning of the reveal and dragged myself into the living room to wake Lin's mom, Patty, who'd flown in from Oregon to attend the appointment with us. We got ready and made tracks for the asphalt patchwork that so often takes us northward: B.Q.E., L.I.E., Van Wyck, Hutch, Merritt, 95....

We got to the ultrasound office first, stopping only for gas and a pre-celebratory Krispy Kreme at a Mobil station along the way. The receptionist, who seemed slightly dazed at first by the arrival of two men and a woman past the age of child bearing, warmed when she realized that we were the intended parents of Jeanne's twins.

My stepmother, Patti, arrived from Massachusetts just after us, completing our merry band. The Patties are a current and a retired public school teacher, and they hit it off in a big way at our wedding. These days they're two peas in a pod and were off and running in no time.

Jeanne and her husband James arrived, and with introductions made, they disappeared into the ultrasound suite. A few minutes later James was back and we were ushered in, with the procedure well underway. The doctor barely acknowledged us as he busily measured hands, heads and heart valves, clicking around and saving images as best as he could amid the twins' constant flapping, and stopping occasionally to print the best images for us to take home. This was the major second-trimester "anatomy scan," and there was plenty to accomplish.

Minutes lazed by as Lin and I struggled to figure out what in the world we were seeing on the screen, and the doctor offering no favors. 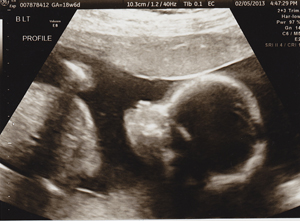 "Everything looking OK?" I finally said.

"So far," the doctor replied, unburdened by emotion. Then, after a pause, he said, "There's one boy," lackadaisically, like it was the ninth miniature scrotum he'd identified that morning.

Half the puzzle solved, just like that! Lin and I looked at each other with that "wow!" look. The doctor plodded on for about 10 minutes more, working the ultrasound wand and occasionally coaxing Jeanne's jellied abdomen this way or that, in order to secure a better vantage point.

"There's another boy," he said in a tone that passed for enthusiastic, pointing to a tiny penis visible on the screen. "You can't miss that." I squeezed Lin's hand.

We brought in the Patties and let them squirm for a second before Lin said, pointing at the screen, "There's one of the boys." Smiles all around. What a moment! Boys having boys, in the most modern of ways, with two of the three grandmothers there bearing witness. Sometimes a moment is as much as you'd like it to be.