Last week, the Baptist Press announced that "leading pastors" from the nation's two largest black and white Baptist denominations, the National Baptist Convention, USA, Inc. and the Southern Baptist Convention, respectively, were scheduled to gather in Jackson, Mississippi on November 4 for "A National Conversation on Race" in "celebration" of racial reconciliation.

Although spearheaded by Mission Mississippi, a not-for-profit racial reconciliation organization, that is propelled by "gracism," the theologically peculiar title of the gathering's opening summit that reflects Mission Mississippi's efforts to "encourage and demonstrate grace in the Body of Christ across racial lines," the convening was centered around Pastor Jerry Young and Pastor Ronnie Floyd, the two convention presidents, as well as 22 all-male participating pastors who served as representatives of the respective conventions, and as facilitators of the conversation.

The Southern Baptist Convention was formed following the split of the Triennial Convention, the 19th century unifying body of Baptists in America, over the issue of slavery. At the precipice of abolition, Southern Baptists fashioned biblical hermeneutics to support the practice of legal chattel slavery while crafting a pathological theological imagination that defended the racial, social, and moral subordination of black life in America.

In the late 1990s, the Southern Baptists passed a resolution to renounce its slavery apologetics. Its inescapable racist history, however, makes sense of the founding of the National Baptist Convention, USA, Inc., more than a century before. Originally established in 1880 as the Baptist Foreign Mission Convention, the origins of the National Baptist Convention, USA, Inc. (NBC), asserted black Baptist identity in institutional opposition to white racism in the church. Although NBC would eventually split further into multiple black Baptist denominational bodies, its late 19th century beginnings at least implicitly affirmed that black lives matter in church and society even when the arbiters of white power practiced otherwise.

This National Baptist history of resistance is intriguing especially when considered in relationship to the convention's relative silence about the scourge of the prison industrial complex on black communities, poverty, and the hypervisibility of contemporary anti-black violence in the US. There is no doubt that a conversation on race is long overdue.

Christians ought to be talking about race, and not only as it relates to contemporary moral issues. As the harbinger of the modern racial project, the church must also admit that racism and its concomitant and unmitigated logics of black subjugation are the fertilizer of American Christianity. You cannot tell the Christian story in the Americas without the concurrent story of race and racism. Denominational convenings that are purposed toward interrogating, lamenting, and repenting for the genocidal and dehumanizing original sin of Western Christianity, and that also strategize mechanisms of resistance that approximate reparation, are of key significance for the work of justice and love.

While statistics indicate that black women comprise 85-90% of black church membership, personal experience confirms that without black women administering the ministry, praying for the pastor, teaching the children, singing in the choir, cooking in the kitchen, answering the phones, photocopying the bulletin, giving the tithe and the offering, and witnessing and testifying to the goodness of the Lord on Wednesday nights, there is no Black Church. As sociologist of religion Cheryl Townsend Gilkes reminds us in her classic text, If It Wasn't for the Women, "if it wasn't for the women there would be no church."

Needless to say, as a thinking National Baptist clergywoman and Christian social ethicist I am appalled, although not in the least bit surprised, that the 21st century National Baptist Convention USA, Inc., would pretend to represent the Black Baptist church in a national conversation on race while excluding half of the race. How do you have a conversation on race in the church when those who disproportionately constitute, administer, and fund the church are not there? What kind of biased, lop-sided conversation is that, even if it is in the name of Jesus?

While the gifts and labor of Black women are consistently exploited in black churches (and in white churches too) they are regularly excluded from leadership and critical conversations at the highest denominational levels. Black women's intersectional identity that casts them not only as racially subordinate, but as gender, and class subordinate, as well, therefore, indicts interracial, interdenominational conversations that "celebrate" racial reconciliation as inherently insufficient for the work of justice as it relates to the entire black community, male and female.

This paradoxical anti-womanist conciliatory posture dismisses the truth that black women know better than most - which is that while the history of white Christianity in the Americas has been a primary source of black death and deprivation, like white Christians, black men in the Black Church kill black women too, literally and figuratively. Sacralized misogynoiristic Black Church practices invisibilize, demonize, and morally paralyze black women and black girls every day. Perhaps National Baptist male pastors and Southern Baptist male pastors are drawn to each other because beyond their skin color and the wave of their hair, they look very much the same.

The absence of black women from the National Baptist Convention, USA, Inc.'s national celebration of racial reconciliation with the heirs of the Southern Baptist Convention's slaveholding history is evidence of the Black Church's moral failure and ecclesial fraud as it relates to gender equity. It misrepresents the face of National Baptist identity and serves as yet another shining example of sexism in the Black Church.

When all the blacks are men, the quadrilateral bind of black women's burden in the Black Church - race, gender, class, and sexual inequity - emerges with increasing clarity. It begs the spirit of the Johannine question (I Jn. 4:20), how can black men, like President Jerry Young, and their patriarchal marionettes feign love of interracial reconciliation, when they hate their ebony sisters who they see (at least enough to invisibilize) everyday? 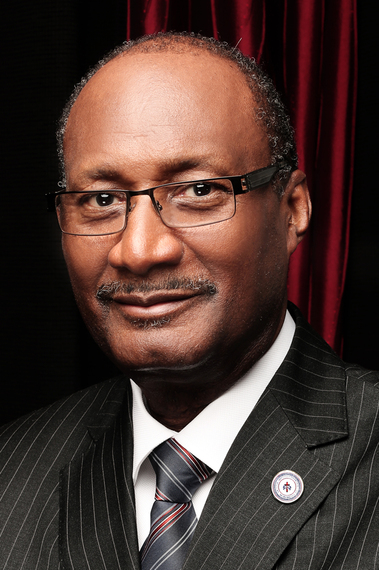